Stevie, we convened earlier than usual because we were concerned about your anger issues. With Reading Task 'Lost in Time,' we trust you learned about a hero who is at his most productive when he's mad. He does not waste time worrying about what other heroes might or might not be doing, because he is too busy smashing what needs to be smashed. He can also be quite tender. Perhaps he is a father figure.

I would be honored to have the Hulk be my father, Instructor, and maybe I will find out that he really is my dad on Revelation Day, when we learn about our parents. I will show him all my reports, and he will say "Hulk Proud!" and punch me in a way that means love as well as hurt, and the bruises will form a heart. 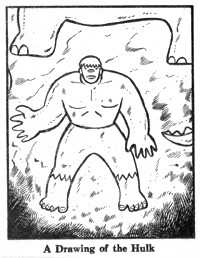 This drawing of the Hulk is very bad. His hands are shadow-puppet dogs, and his arms are snakes, and his nose is a clown, and his toes are dumb. I think this was drawn by someone at a different Facility, where they are not at our Reading level. The words don't even tell a story, so people who can't read don't miss anything. 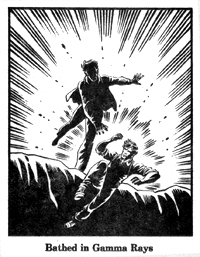 This drawing is usual. The first one was a trick to see if I would get angry at the stupid ugly picture and become a Hulk. This is when Radiation made Hulk a hero. The other man is Dark Hulk. He had the opposite effect, that he was big when he felt normal but got very small when he was mad. He died during his first fight. 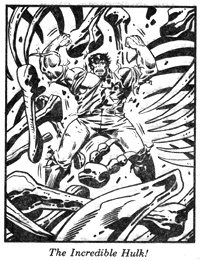 It is a real-style photo of the Hulk. He has been swallowed by a whale or a dinosaur, and he is exploding out of its stomach. Hulk does not hate animals, but sometimes they take advantage of his niceness and eat him, and he must roar and break their bones and become incredible. Animals should know he's not a good food. 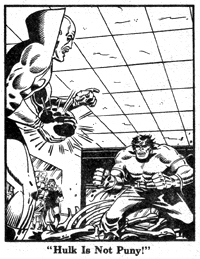 Hulk does not fear this hairless sorcerer. The sorcerer called him Puny, because he looked small when he was disappearing into the hungry dinosaur's mouth. Hulk hates being called names. He will smash open the sorcerer's magic walnut, then he will crush the alien baby dragons that live inside it before they become big. 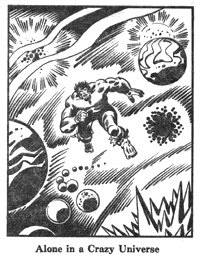 Hulk is alone in a crazy universe, with little planets and spiky lightnings and fluffy dandelions. I haven't seen this background in any other books. Maybe Hulk is so big that he has his own crazy universe, where he can hide. Maybe this Facility is a crazy universe, too. Sometimes I feel lonely, because I don't see other people that look like me, even in the Reading Tasks. Hulk would understand. He would tell me "You are not puny."