What's that smell? Oh, it must be Oscar season because the multiplex smells like roses instead of shit. In fact, the only crappy movie goons saw this weekend was 2012, which gets 0.5 stars and a pox on Roland Emmerich's family. Elsewhere, A Serious Man, Precious and Fantastic Mr. Fox all turned out to be pleasant surprises! 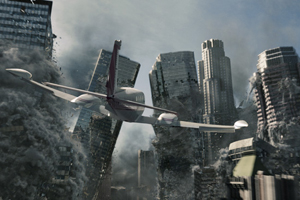 The terr'ists return to finish the job...AND THIS TIME IT'S PERSONAL!EXPECTATIONS: Remember when 2012 was the distant future? Remember reading 2,000 AD and wondering if they'd rename it when that actual year rolled along? More to the point, do you remember being young? When films needed little more than a series of meaningless explosions and some "cutting-edge" visual effects to be good? Personally, I'm starting to forget. I've officially reached that age when films like 2012 no longer appeal to me. If I hold my breath through the entire film, I might suffer a fatal aneurysm before the end and not have to see the whole thing. Fingers crossed.

REALITY: I made it through all fifteen hours of 2012 alive, which is about the highest praise I can give it. 2012 is a soulless, pointless, boring, overly long, reprehensible pile of tripe. People will describe it as a "popcorn movie" and I'm not sure I even know what that means. Maybe it means that 2012 makes you feel hungry? The running time alone will certainly see to that.

The "plot" starts when scientist Chiwetel Ejiofor, undoubtedly one of the finest British actors of today, meets with Jimi Mistry in a bizarre research facility in India, where they somehow figure out that the world is going to end in three years' time because of long science words and visual effects. Over the next three years exactly four things happen, none of which are interesting or memorable enough to bother explaining. I think that's a much bleaker view of our immediate future than the carnage that takes place later on, but it's also the least of the film's problems. 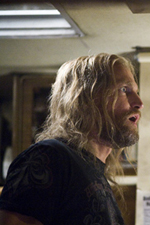 Yeah, we can't believe you're in this piece of shit either.The real story centres around John Cusack playing a not-very-successful author, who is divorced and just wants to spend time with his Hollywood kids. He still loves his ex-wife, Amanda Peet, and hates her new boyfriend, who is also a character in this film. He takes his kids to Yellowstone National Park, where he meets the admittedly entertaining Woody Harrelson, who shares loads of crazy end-of-the-world theories and later turns out to be right.

Then the explosions begin. Cusack manages to get his family to safety by driving away from the apocalypse, which nobody else on Earth thought of. Just to clarify that, he outruns the apocalypse. He outruns the apocalypse by such a wide margin that he is able to have one final chat with Harrelson, refuel a plane and find a super secret map (which is actually just a map of China with the word China printed on it and an arrow pointing at China). From the map, he is able to deduce that he needs to go to China, where he will find secret government arks on which he can stow himself and his family in order to safely escape the end of the world. Because that's something you can do.

It took a lot of effort to write even that basic synopsis because this is a film that refuses to linger in the memory for even a brief amount of time. I'd already started to forget early scenes long before the end was in sight. If the world really is going to end in three years, I'd rather not waste that time watching unforgiveably long drivel like this. Considering the length and the elaborate nature of the plot, you'd perhaps expect this to be a film with some kind of depth, but you'd be wrong. The main characters are extremely dull and lazily written; for example, one of Cusack's kids is obsessed with hats -- I guess that counts as a believable character trait in Roland Emmerich's eyes.

My number one problem with the film is this: There is absolutely no reason for this 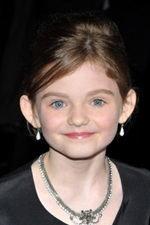 Morgan Lily stars as the grotesquerie that incited the apocalypse. one family to survive over all the billions who die horrible deaths. It occurred to me very early on that I was witnessing a scenario in which I and every other member of the audience would be dead, and yet we are forced to root for Cusack and his family of dullards, even as they gawp emotionlessly at the millions dying around them. At one point, Cusack allows another character to die just because he asked him to. Surely, if Cusack believed so strongly that he could make it, wouldn't he insist on saving him anyway? I'm no expert on morality, but we should be able to cheer for some kind of heroism in this kind of film. The only heroic character is Ejiofor's kindly scientist, whose interests include things like giving inspirational speeches and being right all the time.

There are a lot of arbitrary characters and storylines thrown in for good measure, like Danny Glover as the President of the United States. He's there for some reason -- I'm sure of it -- but he just doesn't seem to do anything. Add to that Oliver Platt as a stupidly over-the-top antagonist who never gets any kind of comeuppance and a ship captain at whom I spent far too much time staring, trying to decide if he was Peter Fonda or not.

To solve the film's great mystery, thus saving you the time of seeing this, I'll end with a spoiler: It's not Peter Fonda.

By the way, I found this in the dustbin outside the cinema. I have no idea what it's about, but it's worth sharing... 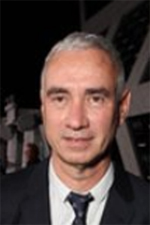 THANK YOU FOR YOUR INTEREST IN ATTENDING THE ROLAND EMMERICH SCHOOL OF FILMMAKING!! WE LOOK FORWARD TO GETTING TO KNOW YOU AND HELPING YOU BLOW SHIT UP REAL GOOD!! (AND, IF YOU DON'T WANNA BLOW SHIT UP REAL GOOD, YOU CAN FREEZE, CRUSH OR FLOOD IT OR UNLEASH A GIANT FUCKING REPTILE ON IT TO SIMILAR EFFECT -- JUST A TANTALIZING BIT OF ADVICE AND THE TIP OF THE EXPLODING ICEBERG WHEN IT COMES TO SHIT YOU CAN LEARN AT THE ROLAND EMMERICH SCHOOL OF FILMMAKING!!) TO COMPLETE THE ADMISSIONS PROCESS PLEASE HAVE THE FOLLOWING ITEMS SENT TO THE ADMISSIONS OFFICE!!:

UPON RECEIPT OF THESE ITEMS WE WILL FINALIZE YOUR ADMISSIONS APPLICATION AND SEND A CONFIRMATION LETTER (BE CAREFUL IT MIGHT EXPLODE!! HA HA HA!!)!! COMPLETING YOUR ADMISSIONS APPLICATION IN A TIMELY MANNER MAY ALLOW YOU TO PARTICIPATE IN MICHAEL BAY'S POSTGRADUATE SUMMER SEMINAR, "BLOWING SHIT UP REAL REAL REALLY FUCKING GOOD AND THEN EDITING IT SO NO ONE HAS ANY FUCKING CLUE WHAT'S GOING ON!!"

IF YOU HAVE ANY QUESTIONS OR CONCERNS PLEASE CONTACT ME AT (REDACTED!!)!!