Sir, About This Sloth... 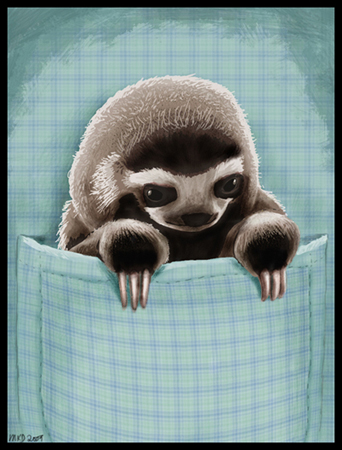 Good morning, sir. I suppose you've been hearing a lot of crazy talk around the office about how I keep a sloth in my shirt pocket. Well, yes, it's true, completely true. The little guy's right here. But you've gotta admit it's pretty crazy!

Actually, sir, that seems to be a myth, far as I can tell. I was expecting he'd be lazy as sin, and that maybe I could move him while he was loafing, but he's really quite industrious. In fact, I hope you don't keep him and fire me. Ha ha ha! But seriously, I wouldn't advise it. He types super fast and all, but he makes a ton of errors. And of course he's useless on the phones. Why, he had this one old lady on the line for a good 20 minutes and he didn't close the deal!

Oh, well, it came with the shirt. I bought it at this roadside stand that isn't there anymore. To be honest, it looks like it might've been hot merchandise. Anyway, it was 75 percent off, and I really liked the pattern, so I figured I could just pry the furry scamp out and keep the savings! But it swiped at me when I went to budge it, and I haven't tried again.

Still not sold on the little guy? I guess I could keep trying to track down a harpy eagle. This gal at the zoo gift shop told me sloths really hate harpy eagles. But, it's pretty hard to catch them out in the wild. I finally found one, and it looked me right in the eye and crushed this monkey's skull, just to show me it could. Then I could've sworn it started cackling at me, but it turns out it was just some guy laughing, and he stopped when he saw my sloth. It's not like you can buy harpy eagles on eBay. Believe me, I've tried. I did get this parking sign that says "I'm a harpy eagle trapped in a human body," and I showed it to Crabadon to see if he might believe it and get scared, but all he did was stretch out one of his claws really slow, poke a hole in this Pepsi can, then pull it back while soda sprayed all over the place.

Yes, sir, Crabadon. At first I thought to call him Speedy, on account of his typing, but then he told me his name is Crabadon. No, ha, ha, he's not a talking sloth, that would be just a little weird. No, what he did was dip his claws into some red stuff -- still not sure what it was, he ain't tellin' -- and scratch "Crabadon" into my mattress again and again.

Martha wouldn't have cared for that at all. But I'm afraid she's moved out for now. She's always been deathly afraid of sloths. She'd start sweating and shaking whenever anyone mentioned them, which fortunately wasn't terribly often. Really, it only came up when Greg was around, because he'd always want to tell that filthy joke about the sloth, the nun and the bicycle, and it was like "dammit, Greg, we've already heard it, now could you please shut the hell up about sloths so Martha can come out from under the bed?" I probably should have thought about Martha when I got this shirt, especially since she made such a big deal about putting that part about sloths in our wedding vows. Guess I was just blinded by dollar signs!

Thinking back, it was still a pretty damn good deal, especially because he's not an expensive pet. He'll eat pretty much anything, including the stapler off my desk. Takes forever for things like that to go through his system, too. I can still feel it poking out of his stomach, and he swallowed it a couple weeks ago. I guess it's still there if you want to retrieve it, company property and all, ha ha. Just wipe off the sloth goo. But word to the wise, I wouldn't try it. He don't like being touched in the tummy. He might look sluggish, even cute, but he strikes like a snake, a snake with claws!

Oh, no sir, he doesn't do that in there. He goes to the bathroom maybe once a week far as I can tell, and it's usually when I've nodded off. One time I woke up and saw him doing his business over in the corner of the room, and he put one of his claws in front of his mouth and made a "shhh" gesture. It really kinda creeped me out. He also washes the shirt sometimes when I'm asleep, in you case you were worried about that because of, you know, hygiene around the office. I don't think he uses the right settings, though. He's kind of a dunce when it comes to electronic stuff.

Yes, sir. I realize we have a reputation to uphold here at Octo-Pocket, and I'll do my damndest to get my octopus right back where it belongs. He's just floating in the bathtub these days, giving me the cranky eye. Hell, if he's too mad to get back in that pocket, maybe I'll just put a squid in there! I'm sorry, sir. You're right, I shouldn't even joke about that.