MOGADISHU, Somalia - The Somali government shocked the world on Monday when the country's leaders announced that they have officially asked God to level the country's capital with an earthquake. Something Awful's Worm Miller was given the rare opportunity to sit down with Somali President Sharif Ahmed and Prime Minister Omar Abdirashid Ali Sharmarke in order to get to the bottom of this unprecedented news.

Something Awful: So, right off the bat, I think our readers would like a clarification of your announcement. You have asked God to destroy one of your cities with an earthquake?

Sharif Ahmed: Not just any city. Our humble capital. Mogadishu.

Omar Abdirashid Ali Sharmarke: And it is not necessary that it be an earthquake.

Ahmed: Yes, we will most happily accept any of Allah's natural treacheries. But an earthquake seems the most simple and, how would you say... effective.

SA: And why exactly do you want your capital destroyed?

Ahmed: It must not be a surprise to your readers that humble Somalia has been doing poorly. Our nation has much goodness to offer, but it is... well...

Ahmed: I did not want to say it! But yes, quite. We know this. We have tried and tried to get help from the West, but no help has come. I thought that the desperation of Somali fisherman resorting to piracy would bring much-needed understanding to our plight, but it seemed to make you guys as angry as water buffalo.

SA: So you want an earthquake to bring attention to Somalia's troubles?

Ahmed: Yes. I have big poster in my office that says, "How Do We Make People Give A Shit About Us?" We have brought in our nation's best minds to pitch ideas! But nothing has worked!

Sharmarke: Then one day we are sitting around chewing qat and watching the plasma and we hop the channel over to BBC, and what do we see? Disaster in Haiti! And we both look at each other...

Ahmed: It was a light-bulb-above-the-head moment. Like in one of your American cartoons.

Sharmarke: We even said the word at the same time...

Ahmed and Sharmarke recreate the moment, looking at each other with big grins. 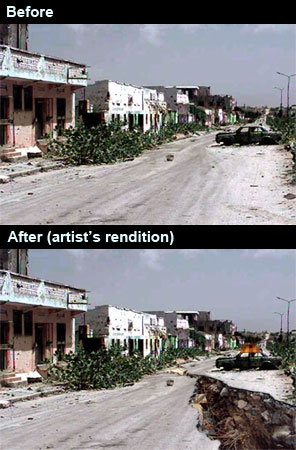