Sonic the Hedgehog has a scarf now. It is brown and it is right there on his neck. This is canon, people. There is no coming back from the scarf situation that we now find ourselves in. 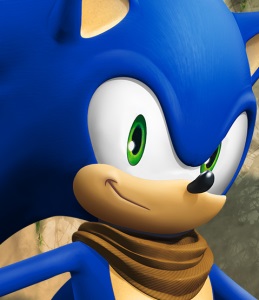 Such a bold step into the unknown might seem frightening. At Sega, however, we love to explore new frontiers and take on the challenges they present. We knew it was time to shake up the franchise and now we have this scarf.

When we unveiled Sonic Boom at this week's D.I.C.E. Summit, it took nearly fifteen minutes to explain the scarf as a general concept. We'd like to clarify a few points that might have been skimmed over in that rushed presentation.

The scarf represents adventure. Old Sonic would have sped right past a temple. Sonic with a scarf will run inside that temple. He will find a trap or a ghost or maybe he will swing from a vine, because his scarf simply won't allow him to not do these things.

The scarf represents danger, but not too much danger. Sonic with a scarf might uncover the sort of ancient curse that can only be defeated by bonking a mummified robot on the head three times.

The scarf represents rugged charm. Sonic with a scarf can open a treasure. He can tumble down a hill. He can look at a map. He can point at a goat or practically any object.

We hope that the scarf makes it easier for you to think of Sonic as a contemporary to heroes like Nathan Drake, or the kid from Bastion, or Assassin's Creed Man, or the guy from Watch Dogs if that game sells very well.

More than that, we think that the scarf conveys how dynamic the personality of Sonic can be. He's stylish yet practical. He spends most of his time scooping up gold rings, but Sonic isn't materialistic. He is complex and, in many ways, like a character that would be portrayed by Philip Seymour Hoffman. On behalf of Sonic the Hedgehog, we express sincere sadness over the tragic death of Mr. Hoffman and hope that Sonic's performance in Sonic Boom will be a fitting tribute to the late actor.

Some concepts were rather simple. A pair of headphones seemed like a natural fit, for example, but ultimately we felt that if Sonic crossed his arms some people might confuse him with a hardcore gangster rapper.

A few designs were really out there. for instance, at one point Sonic had sunglasses. This was uncomfortably close to being too cool and "in your face".

Ultimately we narrowed our choices down to the scarf and a messenger bag. The messenger bag had the bonus of providing an explanation for where Sonic stored all of his rings. This lent the game a sense of gritty realism that we were all pretty excited about. Unfortunately for the messenger bag, we weren't able to get the snap-to-cover system working quite right so we went with the more dynamic scarf.

So how will the scarf make Sonic Boom more worthwhile than the last few Sonic games?

Consider this. Recently titles like The Walking Dead and Gone Home have changed the way our industry thinks about story and character. These games stripped away expository dialog and replaced it with believable people reacting to situations in ways that subtly revealed aspects of their personalities. We genuinely feel that these games represent a sea change in the industry. They inspired us. We put a scarf on Sonic.

Soon it will be hard to imagine Sonic without the scarf. It is a reboot unto itself and the first true next-gen video game idea.

By the way, some of our eagle-eyed fans took their magnifying glasses to the new teaser images and noticed something odd about Sonic's feet. 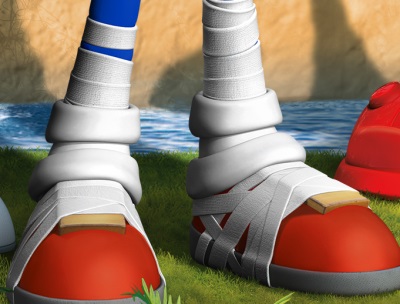 What's going on with those bandages?

We can't wait to reveal all at this year's E3, where we plan to have a two hour presentation on the topic.