Ready For A Stand By Me Remake? How About Eight?

Stephen King adaptations have had it rough lately. The Dark Tower and The Stand were both reportedly in development as every possible combination of film and tv series, but nothing materialized from either project. Cary Fukunaga's two-film version of IT dissolved after studio interference. Under the Dome existed.

There is hope, however. Paramount recently snapped up the rights to the 1986 adaptation of Stand By Me and is already deep in production on not just one re-imagined version of the film, but eight wholly separate Stand By Mes. The plan is to beat Marvel and Star Wars at their own game by releasing one of these movies every four months, creating a relentless barrage of Stand By Me that will pummel audiences into submissive fandom. 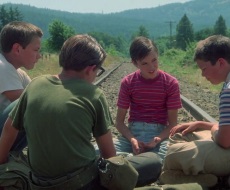 The original Stand By Me was a nostalgic look back at childhood in the late 1950s. This remake attempts a similar treatment of the late 1990s, those innocent years before 9/11 and Y2K. Shown from the perspective of four young boys' CRT monitors, the movie follows their journey through a series of increasingly perilous links to find a picture of a dead body.

Featuring tubgirl as a replacement for the pie-eating contest vomit scene.

Literally just the original Stand By Me. However, for its duration of its 96 minute running time, the audio is drowned out by Staind's "It's Been Awhile". Specifically, a loop of the one part where the guy sings "It's been awhile".

Standing Dead By Me

A blatant cash-in on the wildly successful Walking Dead show that ingeniously combines both narratives. The four boys embark on a journey of self-discovery, hoping to find an undead body in the woods near some railroad tracks. Their trip is one extended, repetitive argument about how they should transition from childhood to young adulthood. Moments after finally seeing the corpse at the end of the movie, they reluctantly agree to move into a creepy man's nearby treehouse.

Four boys set off on a journey to find Mean Gene Okerlund and deliver the wrestling promos of their lives. This powerful film contemplates innocence, masculinity, the sad and mundane ending of childhood friendships, and whether yelling is more intimidating than whispering while trembling.

Richard Dreyfuss narrates the end, in which he explains where the boys wound up after becoming wrestlers (all dead).

Two and a half hours of Quake 2 character models cycling through animations against a grey void backdrop. Occasionally one of them falls into lava or gets gibbed.

This sequel to The Terminal checks back in on Tom Hanks' character twelve years later. Due to a wacky bureaucratic mix-up, he finds himself stuck on standby for a flight that will never depart. Unable to exchange his ticket and too foreign to be allowed on American soil, he must live in an airport terminal once again.

Hey, remember when Morgan Spurlock ate nothing but fast food for thirty days? Then remember when he had a show where people from different walks of life swapped places for thirty days? Well, now he's going to stand for thirty days. The studio expected an insightful film about using immersion to challenge our assumptions, but early word is that Super Stand Me is mostly just Morgan complaining about his legs hurting.

Crank 3: Stand By Me

Immediately follows the events of Crank: High Voltage. Chev Chelios has been hit by a fookin' train. He now finds himself knocked sixty years into the past. To stay alive, Chev must cover his body in leeches and punch a hillbilly every five minutes. To return to his time, he must consume floating power pellets until he is powerful enough to crucify his own grandfather.