Welcome to Comic Corner, a new semi-regular feature devoted to comic books, webcomics, and various soups and stews. You might recall a recent series of articles that looked back at the greatest comic book appearances of recently deceased heroes. Those updates lead to the creation of Comic Corner as an outlet for all sorts of fresh and original articles about comics, so naturally this first installment is just going to rip them off and focus on Superman's finest adventures in the Golden Age.

I know what you're thinking. Superman isn't dead. DC would never be crazy enough to kill him, or bring him back from the dead with a stupid new outfit and stupider powers and say that the changes were seriously 100% permanent, then change him back to his old self but with a bad haircut. And you're totally right. This is Superman we're talking about, though, the prototypical superhero. We don't need an excuse to remember his greatest Golden Age appearances. 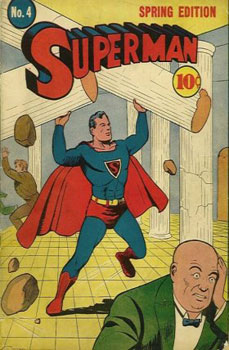 When Lois catches Superman using heat vision to cleanse his hands ten times in a row every hour on the hour, she checks him into a clinic for Obsessive Compulsive Disorder. Can the man of steel defeat his own inner demons?

Doctor Zweebil: Please, stop rearranging those pillars! You've done quite enough!
Superman: Don't mention it, sir, it's no problem! I just can't seem to find the right spot for each one. Sometimes I get them all where they should be except the last one, but then that means the others are in the wrong place. I want to make them right. I must make them right. 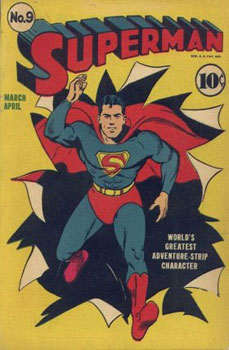 As Superman moves in to apprehend a pair of criminal masterminds, they express doubt over his superhuman abilities, going so far as to wager that he can't fight his way out of a giant paper bag. If he can do it, they promise to change their evil ways and live the rest of their lives as lawful citizens.

Superman: There! I told you I could do it! Busted right through.... hey! Where the heck are they?
The Amazing Paper Bag: ARRGH! How can my life as a crimefighter end like this? I'm too young to die! 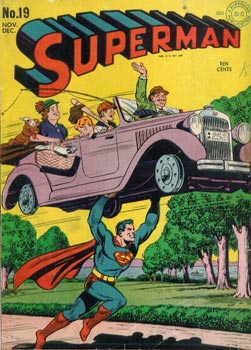 Taking advantage of Superman's kindness may benefit you in the short term, but in the long term when you tell people about it at dinner parties you might accidentally think about what you did and feel sort of bad for a minute or two. BEWARE!

Superman: Sir, I'm happy to help but I'm not sure this is an emergency.
Mr. Jones: Of course it is! Our vacation would be ruined if you weren't here to carry our car to Reno!
Superman: I don't know how to break it to you, but I can't keep doing this every day. Crime and accidental deaths have through the roof in the last few weeks that I've been doing this. Eventually you'll need to buy tires for your car.
Mr. Jones: Can't you buy them and put them on? Isn't that something you should do?
Superman: Not really, sir. No.
Mr. Jones: Don't you have to do it if we yell for your help? 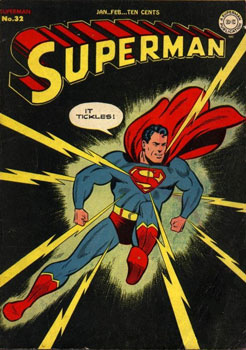 What exactly does Dr. Tickle's Electrotickle Generator do, and why has Tickle Incorporated fully funded his experiments?

Superman: Wowzers, what an incredible machine you've built, Dr. Tickle! What is it?
Dr. Tickle: I call it the Electrotickle Generator. It combines my thirty years of study in the fields of electricity and tickle research. The Electrotickle Generator generates a unique form of electricity that focuses on a target and... why don't you see for yourself?
Superman: Hey! Now I have an extra vertebrae!
Dr. Tickle: Huzzah, it works!