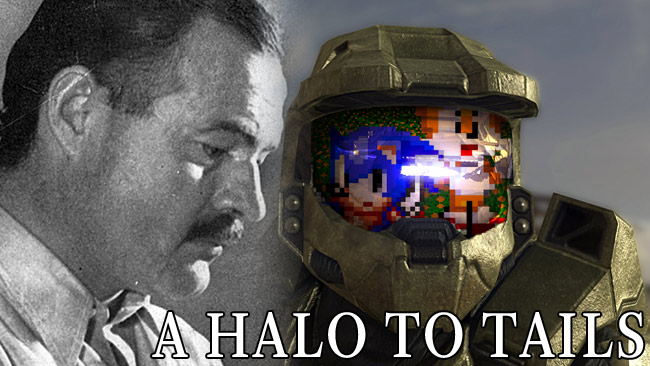 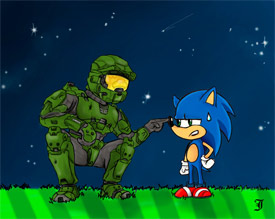 In winter the train arrived from Casino Night Zone and steamed in the cold of the station with its signs painted by hands and its station agents in uniforms of corduroy. The steam from the train gushed into the street beyond the station and changed the atmosphere across from the barber shop and bawdy house and, it being day, it was the scissors of the barber in full work and the ladies billeted from Mystic Cave Zone to earn some rings who sighed with their boredom.

Shadows of people moved inside the steam from the train. Sheriff Tails came out into the street to see who walked down from the platform and after some women from Hidden Palace Zone it was a man wearing a helmet. His face was never seen which was described on the bill from the government Tails held.

Tails crossed the street at speed. He ran in a complete 360 loop and ended up blocking the path of the man wearing the helmet. He was wary of danger.

"I thought you might be. You should come with me."

Master Chief wore an M6D personal defense weapon on one hip. Tails never carried a weapon and relied on cunning and quickness to keep his rings.

"In Death Egg Zone they will give you a reason to do what they want. I can give you a better one, Master Chief. Come with me to the Sheriff Office and we can talk this over like men."

Master Chief followed behind Tails to the Sheriff Office and there was a sign upon the door that spelled out SHERIFF and a drunk sitting in a cell. Tails paid the drunk no mind and walked with Master Chief to the private office.

"Why is there a bed in your private office?" asked Master Chief.

Tails undressed all his clothing beginning with his badge and stood naked with his ding dong out and an Austrian colonel could have stood no better at attention. There was sureness in his eyes. Both of his tails twitched.

"Where I'm from we call them Halo rings," whispered Master Chief.