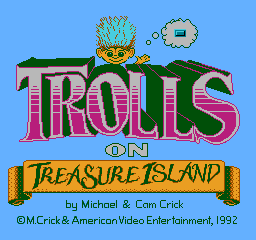 At a glance: Trolls on Treasure Island is proudly subtitled, "by Michael and Cam Crick!" as if it is somehow a selling point that exactly two people worked in putting this game together. At least, I'm assuming they're referring to the game itself, because it certainly seems that way from playing it. Do you like staring at large spaces of black, peppered by indecipherable blobs that have as much objective significance as a Pollock painting? Do you like listening to the high-pitched giggle of a smug blob of pixels as it refuses to listen to any of your commands? If you answered "yes," allow me to suggest a career in a self flagellating sect of the priesthood. But don't play Trolls.
Platform: Nintendo Entertainment System, 1992
Know a terrible ROM? Email me!

In a game where you can technically move in four directions, this is certainly revolutionary!Story: In a perfect world, we would not remember the Trolls franchise. As a matter of fact, in a perfect world, the Trolls franchise would be enjoying a special level of purgatory right now, simmering together such snazzy trends from my childhood as "Cabbage Patch Kids," "POGs," and "attempting to win your child's love with a temple of plastic garbage." Ideally, these items would slowly be melted by the hellfire below, glomming together into a hideous blackened sphere. Furthermore, in a truly perfect world, this misshapen hunk would pick up speed as it rolled through the bowels of Hades, Katamari-like, until it smashes into Satan himself as he gazes wistfully at a glossy JTT FOREVER poster.

Alas, the economy is broken, the icecaps are melting, and I am spending a Saturday night playing Trolls on Treasure Island.

Gameplay: Trolls is supposed to be a puzzle game, and it's actually not a terrible one, which leads me to believe that the mechanics were probably blatantly stolen. That's okay, though, because it sure does win big shiny Gold Medal of Originality in the control scheme department! In fact, Trolls is so spiffily avant-garde that it eschews having a control scheme altogether! Your Troll, who undoubtedly has a sophisticated and unique name such as "Octavio," incessantly zooms about the screen with great purpose. I'm not entirely sure what that purpose is, but it's evidently extremely important in the life of a plastic novelty product, because Octavio makes it abundantly clear that he doesn't need your help to get around in the world.

Naturally, Octavio also has no intention of actually solving the endless tangle of puzzles around him, so the best you can do is politely suggest to him that he may want to, you know, participate in the video game he is allegedly starring in. Typically, Octavio will be too focused on hyperventilating to bother with the infantile whims of the player, but sometimes he will be generous enough to jerk perilously in the direction he thinks you'd like 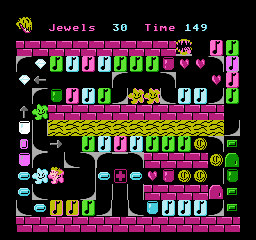 No problem, bro!best -which is never quite enough to actually get inside any of the convoluted corridors. But no need to thank him! Octavio is a true humanitarian.

Graphics: I had high expectations (well, highish; this is the ROM pit, after all) for a game released at the tail end of the NES's lifetime. And the way in which they were completely and utterly shattered reminded me of the Worst Birthday Ever! The world map is like a cake, see, only it's got these pale colors that remind you of the barf you know is soon going to be all over your Return of the Jedi tablecloth. But--

Okay, you know what? I'm only paid enough to do one vast, rambling metaphor per article. Suffice it to say the game could have been called Trolls in a Pitch Black Closet with Weird Unidentifiable Glowing Crap that May or May Not Kill You. But because Octavio is too busy contemplating his doctoral thesis on amphetamines to interact with his environment beyond repeatedly bashing into walls, it's probably for the best.

Sound:The sound effects are delightful! There is absolutely nothing creepy about the fact that they're coming from a haunted malfunctioning kazoo in an orphanage that was burned down by a sad ghost who was touched inappropriately! A ghost that squeaks charming totally non-unsettling phrases like, "Ouch!" "No don't!" "No more!" "No no!" and "Please!" with the same sort of adorable squeak as a baby raccoon in a meat grinder! 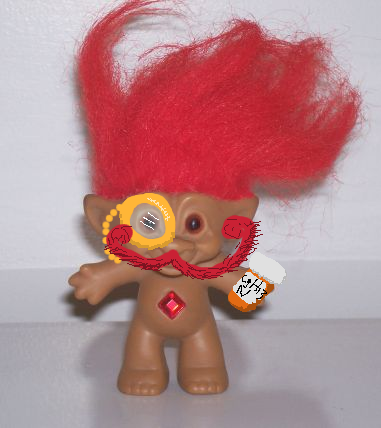 Fun: You know, the puzzle mechanics of Trolls made it almost good. The fact that Octavio is just too darned strong-willed to actually participate in the game is just a slight oversight. Personally, I think other video games should follow Trolls's lead. Who knows? Left to their own devices, Mario, Sonic, and some busty chick in a thong might have a very productive conference on climate change, freeing up time for the rest of us to go outside and stomp on turtles for awhile.

Defining Moment: Custom levels with which to torture your friends! While a relatively novel idea for the time (keep in mind I say this with about as much first-hand knowledge as Game Daily, because my video game experience in 1992 was limited to trying to eat the first level of Super Mario Bros. 3) why would you ever inflict such a depressing experience on someone you purport to care about?

Then again, you'll always have a pal in Octavio.