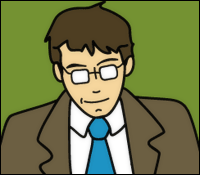 Tech Break is a syndicated column which runs in over three hundred print and internet publications around the world, including Digital Life, PC Compute Beep Beep, and Cat Fancy.

By covering such historic events as the Nvidia / 3DFX video card war of 1998 - for which he won a Pulitzer and lost three toes on his left foot - John P. Qwerty has established himself as one of technology's most respected journalists. He is not afraid to express controversial opinions and harebrained conspiracy theories, even when doing so poses the risk of giving his column increased exposure and a larger readership.

He currently lives in Phoenix, Arizona with his beautiful population of Phoenix. If you have a piece of hardware or software that you would like to give him for free on the off chance that he might write about it, send him an email at john@qwerty.org.

Longtime readers will know that I am a staunch defender of Windows Millennium Edition, the most criminally underrated operating system in history. While Windows ME has not left my hard drive since its release in September of 2000, I have used a separate partition to try out other operating systems from time to time just to see what all the fuss was about. My experience so far can be summarized as follows:

Linux
Too many buttons, just a cheap ripoff of Windows ME with amateur apps that are completely useless.

Windows XP
Don't like the picture of the rubber duck that it assigned to my profile. Don't like it at all.

Windows Vista
Almost as great as ME, but the rays of light that come out of the bootup logo always make me think my glasses are smudged.

The only operating system I haven't had a chance to fudge around with is Apple's OSX Ocelot or Lion King Edition or whatever. You see, OSX cannot be installed on a proper computer and Apple isn't eager to send me one of their overpriced status symbols because they're still sore over the accurate and completely fair comments I've made about the likelihood of them going to hell when they die a horrible death, possibly from a massive loss of blood induced by sticking their junk in an industrial fan.

Why not just buy an Apple machine, you ask? A true journalist never pays for something they are going to write about. It goes against every rule in the Journalistic Integrity Handbook (available this March, now taking preorders on my website). The exchange of money creates a relationship between the reviewer and the product that taints his opinion.

Ideally a company will not only give a journalist their products at no cost, but they will also fly you to their headquarters in first class seating and throw a "Enjoy Your Free Piece Of Technology And This Envelope Full Of Fifty Dollar Bills!" party in your name, preferably with a D.J. and some cocktail shrimp. Only then will any potential ethical quandaries be sidestepped.

How I Got One

Knowing that millions of readers were desperate to hear my opinions about OSX, I had to take matters into my own hands and acquire a Mac through any means necessary. After my regular mid-morning vanity search, I spilled some pickle juice on my blazer to disguise myself and set off for the local Apple Store.

To my surprise, a pile of discarded MacBooks - last year's model, each and every one - lay on the sidewalk just outside the store's entrance. These perfectly functional notebooks had been tossed aside by the trendy Macaholics who had come to get the new MacBook Air, but they suited my purpose just fine.

I only needed to hide behind the pile for ten minutes before a college-aged girl came out of the Apple Store with a new Mac in hand. Obeying Sun Tzu's emphasis on the element of surprise, I waited until she was just past my hiding spot before I leapt out and shoved her in the back with all of my might, sending her sprawling to the ground. She didn't let go of her shopping bag immediately, but years of typing had given my fingers superhuman gripping power and it was only a matter of time before I emerged victorious and ran back to my car, shrieking in fright as she gave chase.

It's a slick commercial. A manilla envelope is opened by a hand model while quirky hipster music reminds you how uncool you are. Inside is the MacBook Air. The whole darn thing fits in one envelope. Even I have to admit it's impressive.

But is it true?

After extensive testing, I can verify that the laptop does fit in a manilla envelope. It does not, however, fit in a standard letter envelope. It doesn't even fit in two of them if you put one envelope around each end of the Air and stretch them toward each other really hard.

Now I'm not sure about you, but in my daily life I encounter regular envelopes a heck of a lot more than manilla envelopes. Apple is clearly in collusion with the manilla conglomerates in an elaborate scheme to force a new envelope standard upon the mindless Mac drones who want to get the most out of their MacBook Airs. It's the same scheme they pulled over on us with the iPod and black body paint.

Now on to the operating system. Unfortunately, this review does not include my firsthand experience with OSX. Before I had a chance to turn the notebook on, I decided to show off its ultra-thin form factor to my son by going down to the park and throwing the unit through an apple that was balanced on his head. As you might expect, one of us got hurt.

The mugger took off with our wallets and the laptop, but not before biting my arm, giving me arm cancer.

I don't recommend the MacBook Air to anyone.