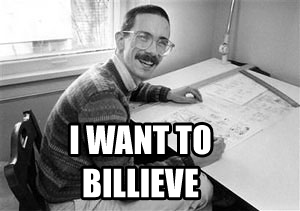 When it comes to former Calvin and Hobbes artist Bill Watterson, the world has one major question. Where did he go since his fateful retirement? Some say he's living in a quiet Ohio paradise with his wife, painting landscapes as his most notable work grows more beloved by the day. Others say that he's become a Darkman-like figure, each week planning a new strategy to sneak into the Jim Davis compound in order to slay the man who so cheapened his former art. Still others believe that a fateful encounter with a vengeful wizard has turned Bill Watterson into what is known as the Barghest, a mythological dog which stalks the streets of London nightly. Maybe I am asking the wrong people.

My name is Thom Flindler, and I am known as The Billstalker. While some men make bigfoot hunting their life's work, I have set my sights on a creature that is much more impossible to find: Bill Watterson.

Very few photos have been taken of the man, so few in fact that his existence is as debatable as that of the Loch Ness monster or those dogs you see in cartoons that carry booze around their necks. Despite this stunning lack of evidence, I have made it my mission to track down Bill Watterson, if only to ask him one question. "Why? Why did you leave us?" Then I will sell him to a museum because I quit my job to become a Billstalker and frankly by this point I think he owes me. Very few pies are left on windowsills these days and that is basically how I'm keeping myself alive.

Recently, my travels brought me to the Bill Watterson's native habitat: Cleveland. This is my story.

A tip on the Billstalker Hotline (not a prank call for the first time in a number of years) led me to a tiny bed and breakfast on the outskirts of Cleveland. Word on the street was that Bill Watterson and his wife were visiting friends from out of town-but they didn't count on one uninvited guest. Me, The Billstalker. I was about to crash their party. Their house party. 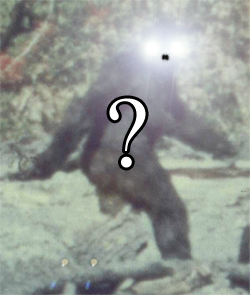 I pulled into the small lot with the Billstalkermobile. When I got my gear together and headed to the entrance of the B&B, I saw a red Ford to my left, with a peculiar decal stuck to the windshield: it was a praying Calvin that was also peeing on Mexico and somehow China at the same time. The audacity! It was like sneaking into the den of Bill Watterson himself and injuring his cubs in front of the man's very eyes. Fueled by righteous indignation, I headed to the service desk and decided to ask the ancient clerk a few questions, using a method perfected by only those who study the ways of The Billstalker.

"Where is Bill Watterson!!!" I bellowed this as I slapped both of my palms down on the polished oak as hard as I could. The man was taken aback; he clutched at his heart with one hand and pulled a well-worn shotgun from beneath his desk with the other. "Y-you'd best get out of here. T'aint no Bill Watterson here, and there never was! Now git!" No amount of buckshot stuck in my shinbones was about to stop me on my mission, and it certainly didn't.

I hobbled up a flight of stairs with the angry clerk following closely behind me. Throwing open the first door I found, I wound up in the bathroom. Then, a familiar smell entered my nostrils: someone left a floater. Caught up in the investigation, I thought, could this be Bill Watterson scat? DNA tests on that fingernail I bought from eBay were inconclusive, so I was overjoyed at the thought of gaining a specimen from this mythical man. Since the clerk had taken a nasty spill 10 feet behind me, I sifted through the leavings and could feel two distinct textures: pine nuts, and contentment. At this point, one thing was clear: Bill Watterson left a floater.

I wiped my hand off on the complimentary guest towels, and gently rolled down the stairs, as my legs had ceased all bending functions at that point. When I reached the parking lot, something strange had caught my eye: The Ford once bearing the Calvin sticker was now a twisted and burning monument to copyright infringement. I looked around and saw a large, black shape bounding through the forest.

I was on Watterson's trail.