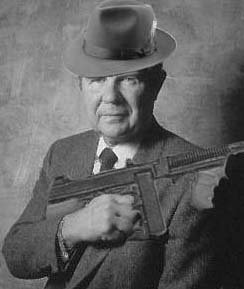 Welcome, my friends, and Gold bless you all. Pat Robertson here for The 700 Club. These are troubling times we are in mired in, for the Lord is witness to the crimes of his children and has predestined us to suffer for our sins. Let us pray:

"Dear Jesus, our Lord and Savior, help me smite down my enemies and of those of my people. Guide our missiles with your hand and our bullets with your heart. We shall not fail you, oh great and terrible Lord. Also, thanks for flooding New Orleans for their debauchery, sinful celebrations, and Girls Gone Wild tapes. Amen."

There are dangerous forces in the world today that are working against the white Christian Americans that are God's chosen people. In this age of terrorism, gay marriage, and evolution in schools, it's no wonder that we are now feeling the wrath of God in the form of hurricanes and oil prices. We have angered him with our nation's refusal to follow His word, and instead walk along the path of sin. I feel that we can only rectify this through doing his bidding, and assassinating His enemies that relentlessly work against Him and America.

For those who say to me, "Hey, Pat Robertson, should a devout Christian really advocate killing people? Would Jesus murder people for their opposing political viewpoints?" Well no, Jesus wouldn't, but that's only because he was a total pansy when it came to violence. He meant well, but I think he just had that phobia for the sight of blood. I forget the name for it. Now, the Apostle Paul on the other hand was a real man when it came to dealing out the justice of the Lord almighty. He once ate a Roman baby and spit out its bones like watermelon seeds. He was an assassin before be started to follow Jesus, and his strong willpower carried over to his religious work, propagating the Word throughout the ancient world and denouncing zealots who dare question his new rules of the church. So, to answer your question: Paul said it was okay in the Bible. Since it's in the Bible then killing is all right, but ONLY if the Lord tells you through a dream or vision, or a Christian Republican representative gives it their stamp of approval. NO MORE QUESTIONS!

Why is this guy still alive? Didn't anyone hear me announce the holy jihad against this rebel and his socialist sodomy? Well okay America, just in case you have mounds of beeswax in your ears, let me state it again: Chavez needs to die, plain and simple. Whatever the CIA needs to do to get to him, get it done. Snipe him from a distance, hold his children hostage, lure him to a park through an Internet chat room, whatever it takes. God will forgive the means if the end result is within His plans. I would do it myself if I didn't have that golf outing with Jesse Helms next week.

Hell, while we're taking care of one Commie we might as well hit the other one too. The CIA mucked up an attempt to poison his cigars in the 60s, causing him to lose his sense of taste, but I think we have a lot more sophisticated spy technology these days. Lets send a blessed robot down there disguised like a waiter, kinda like Johnny 5 from that movie Short Circuit starring Steve Guttenberg, and then stick a knife right in his bloated Communist gut. Robots don't have feelings, and will execute this mission with no questions asked. We could even program him to rescue that poor dirt-child Elian Gonzalez, and bring him back to the warm nurturing teat of mother America. Watch out, you godless red bastards, we have robots and we aren't afraid to use them.

This upstart has been getting his pert little nose in our affairs a little too often I think. It's time for Gandhi to take a vacation -- a long vacation. He walks around half-naked, while spouting crazy nonsense like "pacifism" and "non-violent resistance". No wonder his country has no running water and terrible tech support. That's not the worst part, though: his religion of Hinduism has no mention of the Lord Savior, and its Gods are elephant monsters and blueberry children. He and his kind need to be stopped before this destructive thinking seeps into America and into our computer science jobs. A tip for the CIA/Special forces: he likes to take long walks to the beach to collect salt. I recommend claymore mines and Blackhawk helicopters to make sure you get him. He is very swift and wily.

The real terrorists in this country are the atheist socialists who are plotting this very minute to destroy America from the inside out. The ringleader of these people is no other than that chubby troublemaker, Michael Moore. How long are we going to let this man strut around with his camera and befoul freedom of speech with his unpatriotic propaganda? The CIA need to shut down this bigmouth before he turns even more Americans against our leader George Bush, who has been ordained by God almighty to lead our holy crusade into the cradle of civilization that is Iraq. I personally recommend using a poisoned cheeseburger to kill Michael Moore, taking advantage of his sinful gluttony. A man who worships cheeseburgers before the Lord has no place in this world.

In the Bible, Luke warns us of the temptations of saucy tarts causing men to betray themselves and God. In the old days, if a woman broke up a marriage, or failed to wash a man's goat, she would be stoned to death and her property sold at an auction. This is exactly what should happen to this fat lipped harpy for breaking up the fairy tale marriage of Brad Pitt and Jennifer Aniston. It was a union that was blessed by Jesus in the sacred ceremony of marriage, only to be destroyed by a succubus of Satan. Her only goal was to break Brad Pitt's heart when she falls in love with her next co-star, causing him to become disillusioned with the movie industry and become a beekeeper in Holland. I'm giving the US government the green light to take out this sultry vixen, and afterwards send Jennifer Aniston a bouquet of roses and a gift certificate to Bed, Bath, and Beyond.

Mr. Buttons, I’ve got your number. I’m sick and tired of you haunting my waking dreams and telling me what to do. You’ve fucked with the wrong guy, Mr. Buttons. I know people who can make your death look like drug induced suicide at gay pool party and get back home in time to watch the evening news besmirch your now-tattered name. This is what you get for all the years of torment, all the years of manipulation. I never wanted to do those things and I still have nightmares from the memories of my crimes. I once thought you were my friend, possessed with the spirit of Moses to direct me into the path of God, but now I know you are a messenger of Satan who has been playing me for a fool. Goddamn it, Mr. Buttons, you broke my heart. Now the US Government is going to stop yours.

I told them to keep it out of my yard, but it's too late for reconciliation now. My lawn is spotted with yellow patches where this hell bound mutt freely released its bowels in a sacreligious display of indecency. I run outside shirtless with my "beatn' stick" when I see the foul beast trespassing on the sanctity of my lawn, but it always escapes through a hole under the fence that it keeps digging even though I've filled it with spikes and holy water on numerous occasions. Well now I'm bringing the big guns on you, dog. The United States government will come down on you so hard that you'll wish you were born a cat. I will not stand for this disrespect, be it from a Communist dictator or a mangy no-good mutt! Put him to sleep -- for good.

Kickers should not be allowed to celebrate after a field goal, even if it does result in an amusing injury. These pair of hook-nosed twins are getting a one-way ticket to the grave, courtesy of the US Navy SEALs. We shouldn't allow any foreigners reeking of olive oil and pistachios into football, or into this country for that matter. Build a giant wall around America covered in poison-tipped barbed wire and another wall behind it filled with sharks, bulls, porcupines, and lesbians. I want to make an example of the Gramatica Brothers. We'll make it look like a gay incestuous murder-suicide, and sell the rights for a TV movie called "Extra Point: Kickers Delight". After these plans come to fruition we will systematically go through every kicker in the NFL and remove all Jews, Muslims, Swedes, and Warlocks. If the Lord's holy sport of football can't be full of pure Christian souls, what chance does America have?

I don't have to tell you how serious I am about saving this great nation against the hordes of sodomites, minorities, atheists, and haunted clowns. I am not a man to be trifled with; my influences go all the way to the top. I once split a man open and played in his entrails while he was still alive. I've thrown Negro babies from towering cliffs into the swirling waters below. I once went to Quiznos and ate a 16" sub all by myself, and then threw it up in the back of my new Jaguar. When I call out a hit on somebody, by God you better believe I'm serious. Don't fucking mess with me you motherfuckers.

Today I'll be talking about my old basketball injuries. I don't recommend clicking this link.