'Tis the Season to be German

The month of October has us well within its tyrannical clutches, and that can only mean one thing - we must once again face the most fiendish of holidays. It is a celebration of all that is evil, a dark ritual meant to expose the demonic nature within mankind, an unholy ceremony in which people of all ages and a wide range genders don stultifying costumes that are designed to terrify the innocent and drive the worst among us to new heights of depravity. I'm talking, of course, about Oktoberfest. Unlike St. Patrick's Day, the one day when everyone's a little bit Irish (so have a drink!), Oktoberfest goes on and on, and you will be German or you will be crushed (Drink! Shnell!). The polka-playing war machine that is Oktoberfest rolls onward, sucking victims into its teutonic maw, destroying all those who resist. Many decide that assimilation is the preferable option to death, and so they find themselves immersed in a mass of confusion. The Oktoberfest observer may find himself assaulted with roving bands of fat people with brass instruments, lederhosen, and untold numbers of food products with unnecessary German prefixes, such as German potato salad, Bavarian chocolate pudding, Attila the Hunburgers, and Still Repenting for the Holocaust sauerbraten. It's a strange and disturbing festival, but I will try to unravel its many mysteries, so when you too are pulled into the wake of the German horde, you will know what to do, jah? 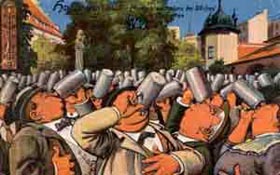 Germans as they like to be seen - drinking and having heart attacks.

The German people are fascinating and worthy of study. I would have gone out and observed one of the many Oktoberfest celebrations in the area, but I have a horrible fear of the outdoors and its many mind-controlling microbes. As such, I did my research like any other true scholar - by typing related words (such as "German," "Germans," and "Goddamnit, I said 'German'") into the Google image search and making broad, sweeping generalizations based on the pictures. For starters, the Germans tend to be fat, mostly from eating children. Now, before you fire off your angry emails (God knows I don't need more of those after last week), let me qualify that by saying that they primarily eat disobedient and irritating children. Just look at Hansel and Gretel. German parents use that story to teach their children a valuable lesson, namely, "obey your father or fucking get eaten." If you need more evidence (although I don't know why you would), just look at German food. It's "brat" this and "brat" that. From the sauerbrat mentioned earlier, which is made from brats and lemons, to bratwurst, which is made from the very worst brats, anyone can see that when Germans get hungry, the first thing they look for is a whiny, annoying, sassmouthed brat who no one would miss. All those children must make Germans thirsty, because they can often be seen drinking a golden liquid they call bier. As far as I can tell, it is much like the English "beer," only good. This intoxicating substance is critical to the German culture, serving a fourfold purpose: 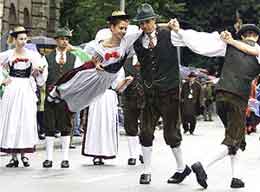 Fritz (l) prepares to hurl Olga like a Jewish corpse, while Hans (r) checks to make sure his socks are still pulled up comically.

The Germans come from a patriarchal society where women are viewed as nothing more than objects. German men have no compunction about literally throwing women around like sacks of cement, or possibly dead children. The exception to this rule is the dominatrix, who has gained a position of great respect in the society. There's nothing sexier to a German man than a woman in studded leather who is willing to beat him, then poop on him. Women who are willing to videotape such acts are especially revered. To most of us, getting pooped on is not quite as sexy as, say, anything else in the world. You have to remember, though, that Germans eat their disrespectful children. Thus, pooping out their food is like giving birth through the buttocks, and with that comes the hope that what was bad when it came out one side will be good when it comes out the other. Like a homely and unpopular caterpillar becomes a beautiful and socially accepted butterfly, so the Germans hope that their naughty children might be reborn as something wonderful that all the world can enjoy. Instead, they become poop. You see? It's a great cycle of sin and redemption. Now you ask me, why do Germans find that sexy? I don't know. Probably because they're crazy perverts.

The German flag - yellow for happiness and prosperity, red for the fiery pride that swells within every German heart, black for filler.

Germans love music. Specifically, they love bad music. No German festivity is complete without a bunch of sweaty, overweight guys in knee-high socks and overall shorts playing tubas. Like the blues to America, like the Jitterbug to Jitterbania, the polka is a music that is distinctly German. Whenever a German hears the steady oom-pah-pah of the tuba, the floating tones of the clarinet, the soulful bassooning of the bassoon, and occasionally the freakish yodeling of some fat broad, he cannot help but leap to his feet, put his hand over his heart, and invade the crap out of Belgium.

There you have it - everything you need to know to survive in the event that Oktoberfest sucks you into its gaping maw. You may at some point actually have to converse with a German person. If you have studied this page well, it should save you from uttering such faux pas as "Go back to Germania, German person" that would undoubtedly result in nothing but dirty looks and your house being sacked. I wish you the best of luck, and I'd also like to point out that I got through an entire article about Germans without so much as one mention of Hitler.

It starts with "C" and rhymes with "Blanky"

Over the course of a week, anyone would get tired of normal, well-adjusted Steves. That's when you need a dose of the lovable vitamin called Cranky Steve! Specifically, you need the work of his henchmen Jed, Mista T, and Psychosis. Each of them has a whole boatload of cranky, and they've set a course for three soul-crushing maps. You make with the reading, they'll make with the smug sense of self-satisfaction. 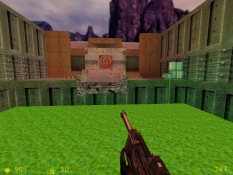 2FortSniperThe bases themselves have an unusual layout, since getting to the flag requires you to navigate through approximately 16 miles of tiny, cramped hallways, next to enemy hwguys and sentry guns that will be blasting you with machine gun rounds. So, until you figure out the secret code that lets you select the hidden “700 pound cyborg made entirely of kevlar” class, you don’t have much of a chance of even seeing the enemy flag.

There's plenty of raw hatred to be had, so check out the Haunted Whorehouse and get to it! If you've got an amazingly bad map you think merits a review, send it on over so the intrepid Whorehouse team can do their thing. Be warned, though, they may not praise it to highly. That's just not their style.