I'll be the first to admit that I know nothing about the advertising industry. I probably know so little that after you finish reading this article, you will actually be exponentially more ignorant, possibly to the point where you forget how to walk and breathe at the same time. However, since reading any article on this site easily produces the same effect, I don't think you should worry. The advertising industry has always boggled my mind, as I simply can't grasp the thought process that fuels the campaigns spit into popular media hour after hour. Maybe their executives and idea men are on a level of existence so high above me that trying to determine the motivation behind their actions would be like any of us trying to figure out why God created France. We're constantly subjected to ads which feature people from another galaxy acting in a way none of us would ever act, doing things none of us would ever do, and purchasing objects which none of us would ever purchase. SUVs drive up Mount Everest at 80 miles an hour, teenagers perform "extreme fishing" exercises on top of a bull that's on a kayak tied to a parachute, and women between the ages of 18 and 40 take prescription medication that allows them to gallop through fields of wheat and flowers.

Unfortunately, this is only the tip of the iceberg. The world of advertising gets much spookier when we venture into an area only trained experts dare to explore: the world of product mascots. These trained creatures are often raised from birth to simply pitch whatever product their parent company hands them, knowing nothing about the world outside their sterile genetic manipulation laboratory. As a result, most mascots go crazy after a short period of time and have to be destroyed by government death-squad experts. Ever wonder what happened to Spuds MacKenzie, the Budweiser marketing dog, or Bud Man, the Budweiser marketing dope? They're currently making up the vitamin-enriched chemicals that help the flowers grow in scenic Russel Park, Maryland! Remember the plucky "Where's the Beef?" women from Wendy's in the 1980's? I hope you don't for your sake, because if you do you'll have a pretty good idea regarding where the beef from Wendy's franchises comes from.

Now I don't want you to get the wrong idea; not all mascots grow to be evil, horrifying mutants who seek to end all life on Earth as we know it. Some of them are simply born and bred this way. In today's Article of Stupendous Seriousness (ASS), we will examine three of the more frightening and horrifying product pitchmen to ever be spawned from a vat of neon green sludge that pulsates and makes breathing noises when your back is towards it.

Buerins died of scurvy in 1920 and his soul was immediately turned over to the Prince of Darkness. When Satan realized that the soul of Frank Buerins was very annoying and had a tendency to break things, he sold the rights of the soul to General Mills in 1973 in exchange for $100 and three minor league players to be named later. Many analysts believe ol' Scratch was the winner in this trade, as General Mills has had to put up with Booberry's notorious tirades and radical anti-government protests for years.

HORRIFYING MASCOT #2: Grimace
DESCRIPTION: While most gumdrop-shaped 500-pounds of purple mess inhabit industrial landfills, Grimace is somehow able to walk around, speak, wave his tiny arms, and interact with various other McDonalds spokespeople. Grimace enjoys promoting McDonalds milkshakes, hamburgers, and that McRib sandwich that is made out of horse faces.
HISTORY: Nobody knows the mysterious story behind Grimace, and leading scholars are unable to even determine when he was born. Based off limited evidence, we believe that Grimace is a by-product of McDonalds chemical engineering during their infamous 1972 experiment "PROJECT ANTI-TESTES." Although Grimace was tossed aside during the experiment (as scientists expected him to die with the others), he was somehow able to overcome the odds and survive. A laboratory worker spotted the fleshy, throbbing mass of purple in the corner and reported it to Dr. Allen Burglar, whose son "Ham" later broke away from the family and led a life of crime. Grimace was given his name in 1974 when laboratory technicians noticed that whenever anybody approached to feed him, they would begin grimacing in pain from the horrible, horrible odor he emitted from the oozing pores covering his body. This odor was described as smelling like "a fish used to clean the toilet for the past nine months," and is attributed to the theory that Grimace eliminates his bodily waste through the his skin pores, as he lacks a functional anus. Oh he has an anus, you can trust us on this one, but it's not functional.

Grimace has been trained through classic Pavlovian behavioral patterns to respond positively to milkshakes and desire them at every chance. This has resulted in a number of negative experiences, most notably "The Houston Horror" which occurred in 1987, when Grimace flew into a fit of rage after being refused service in a Houston McDonalds which only served white people. Three people were hospitalized and are still under doctor supervision, as Grimace somehow began flinging infected droplets of his skin waste throughout the restaurant during his rampage, causing a rare form of blood poisoning known in the medical community as "Holy Shit, You're Gonna Die, Dude."

HORRIFYING MASCOT #3: The Michelin Man
DESCRIPTION: Composed of stacked, bleached white tires, the Michelin Man is a behemoth of the advertising industry. His feats of incredible strength are matched by none, and his legendary tales make Sylvester Stallone look like Pee Wee Herman. Those who have crossed The Michelin Man and attempted to defraud or defile his name have often been reported missing shortly afterwards. The authorities are looking for any help regarding the missing persons case of Alex Banjodark, who has apparently been missing most of his upper body and head since in 1998.
HISTORY: The Michelin Man was created in 1898 by a crazed German hermit named Berthold Heinz-Dieter who lived in a junkyard. Berthold could not stand to touch another human's skin, so he lurked in his junkyard every day, creating crude robots fashioned from chunks of metal and mud. One day an unannounced tire truck dumped off a load of used tires into his lot, falling upon the metal framework for a robot he had previously created to smash in the windows of his neighbor's house. A chemical reaction soon took place and, energized by a strike of lightning, this robot literally "came to life" and immediately "murdered" Berthold. Unleashed upon the public, the deadly robot roamed the wilderness and survived by murdering rabbits, bears, trees, lions, hats, mountains, and other stuff that lives in Germany's woods. He was captured during the US defeat of German forces at Ruhr Valley on April 1st, 1945, and treated as a prisoner of war.

Eventually he befriended a kind-hearted American named Colonel Henry "Sharkface" Sam, whom he persuaded to bring him to the United States. Upon reaching Camp Beauregard, the German killing machine immediately murdered Colonel Henry and his wife and children. Michelin Tires Inc. captured this marauding menace and, through a rigorous series of training events, taught him to refrain from immediately murdering people. They dubbed him "The Michelin Man" and promoted him as "the most trustworthy lump of talking tires that will mostly certainly never immediately murder you." While many trained actors donned the Michelin Man costume and attended various store openings and other promotional events, the true Michelin Man was kept inside Michelin's maximum security prison until 2001, when their leading engineer claimed the Michelin Man was "safe enough" to be released. As soon as he was exposed to the outside world, the Michelin Man immediately murdered the twelve guards escorting him and eventually embarked on a state-wide raping spree in which he violated 48 females, 23 males, nine post office boxes, and a majority of the animals and instruments at a pork factory.

While there are many other nefarious mascots of the advertising industry, such as Mr. Bubble, the Noid, and the Snuggle Bear, we feel the aforementioned three character pose the greatest danger to we, the members of the public. If you encounter one of these mascots, DO NOT attempt to approach them at any cost! They may try to lure you into a van with the promise of a shiny nickel or an evening of rape, but do not fall for their tricks! We hope that our ASS has proved to you today that the advertising industry has a dangerous, insidious side to it, and this side includes a dead guy wearing a hat, a purple secreting wad of disgust, and a humanoid composed of tires and death. And hey, even if it didn't, you can always tell people that you saw our ASS today.

Gushing Forth from the Goldmine

It's another week and with the new week comes new images of despair and wasted lives that the goons of the Something Awful Forums have created for your indolent, wretched enjoyment. This week's theme is "Merging Famous Art with TV, Movies, and Anime," and it is fairly entertaining, although not overly so such that you would spend countless hours sifting through the subtle nuances of its imagery. 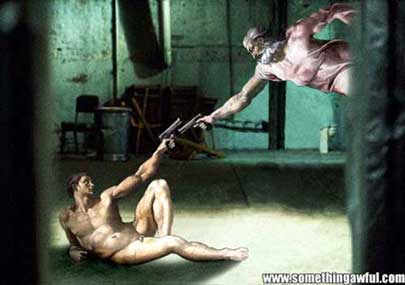 So anyway, go look at it and stuff, ok? I am asking nicely because I want this transaction to go as smoothly and as painlessly as possible.