The Groundbreaking Bravery of Monsieur Toilet 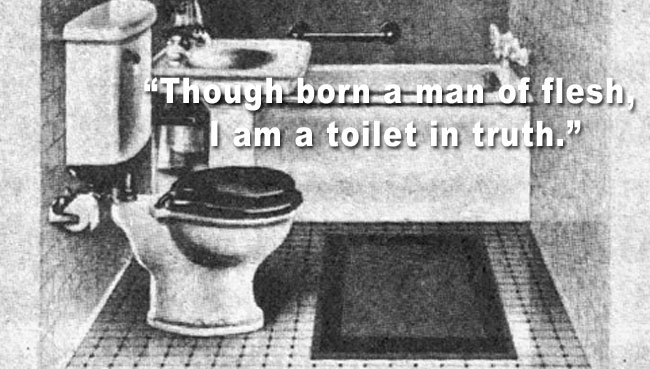 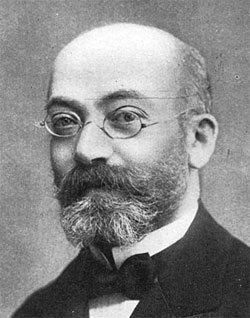 Guillaume Foss, only hours before becoming a permanent toilet.Guillaume Foss devised and constructed, at considerable expense, a chamber that would allow him to at last become a permanent toilet. With a last goodbye to his mostly estranged family in June of 1934, Foss entered his "toilet phase." He never emerged from his chamber. For all that is known to history, Monsieur Foss was the first and only man to successfully become a toilet, inspiring thousands of rabid fans over the decades to follow.

It had been Guillaume Foss's long ambition, since admiring his first toiletman performing on the Rue de Rivoli in Paris in 1908, to become a toiletman himself. Foss noted in his journal from the time that the man, painted white and wearing a silver bathing suit, had successfully toileted himself before a crowd of some 500 onlookers. "He was magnificent. As fine a commode as any I have seen."

Foss approached the man after the performance, sensing a kindred spirit.

The performer was not receptive to monsieur Foss and his journal notes "great contempt" and the insistence, which Foss found cruel, that toileting is "only an act for performance, not a way of being."

Foss had found not just a way of being, but his Raison d'etre in the act of toileting. At the cost of a marriage and many friendships he began to live his life as a toilet as much as possible. He stitched a silver pipe suit and painted his limbs and face white. He would frequent closets and restrooms and position himself as a toilet, sometimes even fooling drunks into pissing into his face. 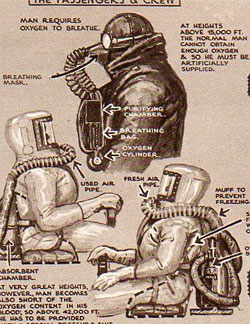 Foss often practiced toileting in "stink suits." A crust of shit was placed into a box and he breathed nothing but its air for hours at a time.During these heady times of experimentation, Foss began to develop new methods to toileting which some found excessive. He devised a way to hook his body into a water main so that he could flood his mouth with water if his foot was stepped on. He created a paste-like body paint that hardened into a porcelain finish on his face and limbs. He regularly boiled and drank piss from a harbor privy to perfect a tolerance.

Foss's children, by then grown, finally severed their ties with the infamous "Mad Toiletman of Calais" in the early 1920s. By then, Foss had been arrested several times for lurking outside public houses and making believable flushing sounds from the bushes. When he installed himself into a ladies' bathroom in Ghent he was nearly beaten to death for allowing a minister's sister to shit onto his eyes.

"It's no joke, they say," Foss bemoaned in his journal of the time. "I agree. They think toileting is for the public square or, increasingly, not at all. But I have found my home as a toilet. I only feel alive when I am the basin for a fresh scat or wee."

Detached from all acquaintances, other than a few that encouraged his behavior, Foss's obsession grew even as toileting all but disappeared from society. Newspapers of the time only dwelled on the absurdity of Foss and his bizarre inventions.

"Why would a man want to become a toilet?" wondered a headline in Bordeaux and cruel editorial cartoons referred to him as a sewer pipe. Foss's name even became synonymous with consuming filth. A Foss was a degenerate or, at best, someone who ate poorly or indulged in other things to grotesque excess.

"No one understands me," Foss wrote in his journal shortly before his final act of toileting. "They all want to be Katzenjammers. They all have their own fandoms. No one cares about toileting anymore. They don't understand that I. AM. A. TOILET. It's not pretend. It's not fiction. I awake a toilet and my dreams are those of a toilet. Someday soon I will flush away all of my worries." 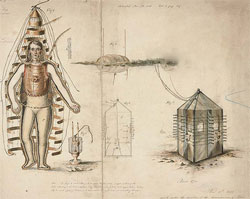 One of the last remaining diagram's of Foss's "Human Water Closet." That day came on August 8th, 1934. Before an audience of a few aged toileting supporters and the only family member he could coax into attending, his demented uncle Rumblt, Foss unveiled his creation. By all accounts his Human Water Closet was a clever thing. Even his detractors, who later inspected the device, could see no way to disintegrate man from toilet. His blood flowed with the water connection, his breathing was assisted by pisses, and even his digestive tract composted solid waste before expelling it to the sewer.

Eighty years ago today, the world celebrated Guillaume Foss. For those few shining days, there was a little toilet inside everyone.