This marks the third in our continuing Roleplaying Corner series and it marks the first article intended purely as a reference for Dungeon Masters. Previously we have released the Adventure Modules "Dwight's Keep" and "The Darkness of the Dark Queen of the Underdark". This time we are offering a catalog of some of the most amazing magic items you will find on any of the infinite planes. These items are easily integrated into any campaign and include complete rules for their use.

Similar to Morduk's Media Mailer of Massed Marmosets, this 10x10x4 inch leather satchel can be opened to unleash an infinite number of turtles. The turtles exit the satchel at a rate of one every round unless the satchel is upended in which case the turtles will exit at a rate of 4D6 per round. Treat every 20 turtles as a swarm with the same attributes as a swarm of clams from "Marine Menace Manual II" but increase speed from 0 to 1 and remove the ability to shoot water. The turtles generally attack by walking slowly towards their target and then bumping gently against it inflicting 1D8-8 damage. If the target receives negative damage from the attack consider them to be "calmed".

The Stainmaster's Magical Carpet is generally purchased from a magic carpet salesman and cut to fit a room, although remnants can sometimes be found in dungeons. The Carpet will deflect hard-to-get-out stains like grape juice and mud, launching them into a pocket dimension generated by the carpet itself. If the gating ability of the Stainmaster's Magical Carpet is suppressed it will instead squeal loudly to notify the homeowner that a tough stain has just made contact with its surface. When walked on the carpet sobs softly with each step and some say it can actually experience emotions. The carpet generally comes with a warning label that cautions owners not to antagonize the carpet or else it may gate them randomly to one of the abyssal planes. Cursed versions of this magic item are generally white and much less resistant to stains.

These small exquisitely carved ivory figurines come in an almost limitless variety and, when placed upon the ground, can transform into a figurine almost three times as big as the original figurine. Rumors exist of even more powerful figurines that can turn into figurines five times the size of the original figurine, but no wizard has yet mastered the magic of creating these powerful artifacts. When the owner of a figurine wishes to recover the original he simply speaks its power word aloud, then fights the Pit Fiend that guards the heart of the figurine's magic. When the Pit Fiend is defeated the figurine will resume its original tiny size and can be safely picked up.

Press On Nails of Giant Strength

These enchanted self-adhesive false fingernails are available in a number of attractive designs and shapes and can be easily painted. Their surfaces are not damaged by nail polish remover either, so you can try 50 shades guaranteed. Each individual nail also confers a +1 bonus to the wearer's strength allowing for a cumulative bonus of up to +10.

These finally crafted leather bracers are engraved with the symbols of various types of mythological dinnerware. By donning the bracers the owner of the magic item can become instantly adept at dinner etiquette and receives a +5 modifier when making any Civil Eating saves. The bracers also prevent botched saving throws and etiquette-related skill test rolls, so your party's barbarian no longer needs to worry about grotesquely using the salad fork to eat stewed potatoes. The bracers also confer a +2 bonus on tasks immediately related to dinner etiquette such as post-dinner coffee etiquette and all Too Full for Dessert saves. It is worth noting that these bracers have absolutely no impact on dinner conversation etiquette, so players relying on them for all of their decorum would do well to remain silent at meals whenever possible.

Bound in the flayed skin of 100 saints and penned with the blood of virgins, this sinister and forbidden occult text is an item of incredible power. Each page is scribed with a magical version of a romantic novel about two old widowers meeting each other by chance and falling in love in the last days of their wretched existence. Every one of these stories is accompanied by maddeningly detailed illustrations, usually of unrelated denizens of the underworld. It is rumored that locked within each of these novel length tales is the ability to summon all of the demons and devils featured in the accompanying illustrations. Owners of this book should be warned, in addition to the danger it poses to one's sanity it is known to be sought by none other than the Dread Lich Phil. He has sworn to search eternally for the book and woe betide any man who stands between Dread Lich Phil and what he desires.

This gorgeous headband is composed of soft pink terrycloth and is lined with elastic making it wearable by creatures ranging in size from Lilliputian to Brobdingnagian. The source of the circlet's power is a faded iron-on patch featuring the words "Losin' It" and a cartoonish frazzled woman in a leotard doing some sort of a dance. The circlet allows the wearer to automatically pass any Step Aerobics, Staves, and Wands Saving Throws and confers a +5 bonus to Jazzercise and Sweatin' To saves. The circlet also functions as a Mediocre Globe of Invulnerability when the wearer is attacked by an opponent using Tae Bo.

These enchanted white velvet gloves are capable of casting Kofi Annan's Invisible Butler once per day as a 20th level wizard. When the command word is spoken a bolt of spectral energy will dance from the fingers of the glove and quickly coalesce into Kofi Annan's invisible butler Horace. Horace acts as a 5th level Barbarian with maximum hit points completely under the control of the caster and is equipped with a silver serving tray that can create either a telephone or a flute of champagne on command. Because he is invisible Horace cannot be attacked directly unless he is being targeted by an area effect spell, breath weapon, or the assailant is wearing Kim Il Jung's Hollywood Sunglasses of Invisible Butler's Invisibility Cancellation.

This collapsible travel coffin made from handsome mahogany and lined with ermine is as luxurious as they come, but it is also cursed. Anyone who sleeps inside this coffin during the day will sleep restlessly and awaken with a -1 (cumulative) modifier to their Constitution that last for D6 hours. They will also feel tired and want to take another nap, which can lead to a downward spiral of Constitution drains caused by napping in the coffin. Anyone who sleeps for a full night in the coffin will awake fully refreshed and cheery. It is believed that the twisted wizard who created this travel coffin gave it this property to lure unsuspecting adventurers into taking naps during the day.

This deck appears as a slightly battered and marked casino deck from The Sands that consists entirely of face cards. Drawing a card from the deck will summon one inconvenience with which the wielder can harass his foes.

Ace of hearts - Shin splints.
King of hearts - Traffic citation for expired tags.
Queen of hearts - Scuffed dress shoes.
Jack of hearts - Stuck in an elevator with goblins.
Ace of diamonds - Trying to buy mead on a Sunday.
King of diamonds - 6d6+3 kobolds attack.
Queen of diamonds - Having a picnic at a table close to the bee-infested trashcan.
Jack of diamonds - Late night astral visitation by drunken Max Von Sidow.
Ace of spades - A friend won't stop talking about "Invader Zim".
King of spades - Sudden recollection of the "Jock Jams" series of CDs.
Queen of spades - Sat through "The Wedding Planner" and didn't get laid.
Jack of spades - Drywall is infested with dark elves.
Ace of clubs - Cigarette taxes go up another 50 cents a pack.
King of clubs - Three Best Buy employees try to sell Extended Service Plan.
Queen of clubs - Another rehashed "Simpsons" plot about how stupid Homer is.
Jack of clubs - One of those dumps where it doesn't quite all come out.

Each inconvenience lasts D6 hours but leaves behind lifelong memories of its passing.

Whistle of Protection from Rapists

This green ivory whistle is covered with fine scrimshaw paying tribute to the Elven goddess Rick, nature goddess and shining light of fertility in the Elven pantheon. Whenever the whistle is blown it emits an uncomfortably high-pitched keening wail that will drive away rapists within earshot. Rapists attempting to attack the wielder of the whistle must make a Fortitude Save (DC B-3) or suffer D6 points of non-lethal damage. They also lose all actions for the remainder of the turn and until they succeed at their Fortitude save or flee the area. The effect of the whistle can be unintentionally countered by the wielder if they are wearing revealing clothing or otherwise "asking for it".

This powerful artifact is said to have once belonged to Archmage Clivillés of the great cabal of sorcerers known as C&C Magic Factory. This tightly knit organization of wizards possessed a mysterious magic item so powerful that it was known to make people "hit the floor" and even sweat until blood actually emerged from their pores. The Factory split apart when rogue wizard and high-ranking member Freedom Williams took possession of this magical artifact for himself, rebelled against the other wizards, and used the magic item to take control of their hearts and souls. Freedom later used his alchemical abilities to change the shape of the magical artifact into that of a hat with the word "BAD" imprinted on a mithral plate that was bolted to the hat's front. On command of the wielder the hat can emit a low frequency tone that is painful to animals and causes sudden and intense epileptic fits in sentient beings lasting 24D2 rounds.

Jean Luc Picard was the best wizard at Starfleet Academy, but on his first mission he was tragically struck dead by an assassin's poison. Jean Luc Picard never realized his incredible potential, but the Dean of the Starfleet Academy commission dwarven forgers to create a powerful artifact so that Picard's legacy might continue. The torque is made from indestructible Trilithium crystals and is shaped into a water serpent, but the real value of the torque is the magic it holds. Any wizard can draw on the power of Jean Luc Picard to cast Charm Monster or Charm Large Monster once per day, Hold Monster twice per day, and Jiggle Small Monster thrice per day. The torque can also cast Grease as a free action an unlimited number of times per day, although this magical grease cannot be harnessed for fuel oil purposes.

I hope you aspiring Dungeon Masters out there can put these new magic items to use in your campaign and I look forward to hearing of your adventures! Remember, don't hand powerful items out too freely or your party could turn into nothing but a bunch of treasure addicts.

Do You Want to Play a Game?

Hello friends and muffins! Livestock here with yet another boring announcement telling you to read Photoshop Phriday! Do what I just said! This week we're doing our 4th installment of "Phake Games," the first since last November. I believe you will find the feature to be of a humorous and/or satirical nature, likely capable of mounting a grin on your face assembly. Here is a customary preview for viewing purposes! 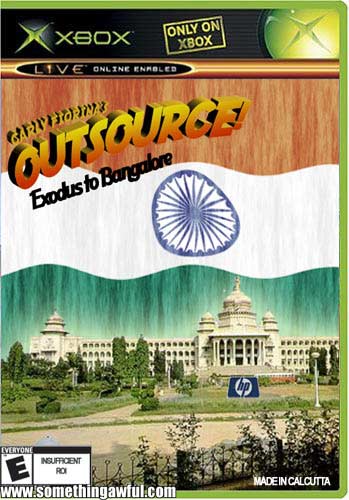 So get busy and read already, you dumb jerk. I hate you.