I'm going to keep this intro pretty brief: basically, I've run into a little bit of financial trouble and I've been trying to move into a much smaller apartment (welcome to Obama's America, people). I'm way too tired from moving to write an article this week, but since I have your ears bent anyway, I figured I'd offer you a pretty sweet deal. I'm selling a ton of my old VHS tapes, because I just don't have the space for them anymore. Most of them are in pretty good condition unless specified, and some of these movies are pretty rare.
Please do me a favor and take a look, and email me if you're interested in buying one. Serious inquiries only.

Rap Pharaoh (1983) - Kurtis Blow stars as Raphemtep, an Egyptian mummy king who comes back to life after a rowdy teenager brings a boombox into a museum. The expected comic romp ensues, with Raphemtep teaming up with neighborhood kids to build a pyramid, et cetera. Kind of goes off the rails in the third act when Raphemtep starts slaying all the Hebrew children in the Bronx, but a pretty funny movie overall. $5.00

Double the Presidents (1996) - Peter and David Paul (the inimitable Barbarian Brothers) in one of their later, undeservedly forgotten starring vehicles. This time, the boys are mistakenly elected president (both of them!) after an electoral mix-up, and they're left to run the country with only their beach-bum wisdom, their rippling muscles and their cockamamie cabinet. They let their big, buff hearts be their guide, and in the triumphant climax, they pass a law requiring all sexual deviants to be quarantined, thus ending the spread of AIDS. It should be noted that the film was financed largely by a recently paroled Lyndon LaRouche. $8.00 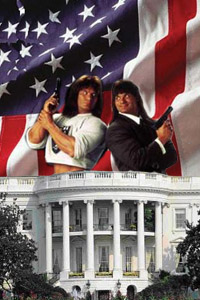 Ernest Goes to Berlin (1989) - A lot darker than the other ones. This is from Jim Varney's legendary "lost years" in Berlin. Some classic Ernest gags-- look out for the goldfish slingshot and the policeman stepping in the bucket of mud-- but generally quite maudlin and oppressive in tone. Now mainly remembered for the experimental soundtrack by Scott Walker and John Cale. $7.00

Leave Me Alone! (1992) - Pretty great Home Alone rip-off starring Macaulay's brother, Kieran Culkin. The filmmakers could have rested on the laurels of that casting coup, but they took it in a totally unexpected direction: young Kenny, accidentally left behind while his family goes on a fishing trip, catches the eye of a pair of neighborhood perverts (James Remar and a devilish David Patrick Kelly) and must defend his body against their hilarious sexual advances. This is a hard, hard "R," so put the kids to bed. $3.00

Laptop (2009) - Cuba Gooding Jr. horror movie about a laptop computer that keeps closing elevator doors on people. I'm pretty sure this was the last movie ever released on VHS, and I think it was some kind of promo where JVC made a laptop computer with a tape drive so you could digitize your old movies, and this came free with the computer? It's either going to be really valuable someday or really not valuable at all. $12.00. I'll also sell the laptop with the VHS drive for $750, and if you buy that I'll give you the movie for free.

Death Potato (1989) - It's about a talking potato that kills people by flying into their mouths. I got this thinking it would be a fun campy thing, but it's completely serious and it scared the shit out of me. My friend Thomas actually started crying and had to leave the room. I read somewhere that they tried to ban it in Illinois after two kids killed themselves. $6.00

Mansion of the Hungry Dead (1983) - I'm usually a big fan of Italo goremaster Lucio Fulci, but this one never really gets off the ground. In it, a man inherits a spooky mansion with a dark secret: it's inhabited by a bunch of terrifying walking corpses, all of whom are very hungry. The man has to keep cooking them meals, and he makes several trips to the grocery store throughout the film. I think the hungriness of the ghouls is a metaphor for something; maybe Italian politics? Eventually, the guy leaves. $3.50

Convent Massacre III (1986) - An inferior sequel, unworthy of the Convent Massacre name. It's uncharacteristically stingy with the nun nudity, and only six nuns are killed throughout-- hardly a massacre! Also, I'm no expert on religious orders, but it seems to take place in more of a all-female monastery under the guardianship of an abbess, which makes it more of a priory than a convent. Bogus. Totally En Bogue. $1.00

Revenge at Hanging Rock (1978) - Three years after the alien abductions at Hanging Rock, a young vigilante (Mel Gibson in an early Aussie role) returns to the scene to find vengeance for the murder of his sister. Not one of the more acclaimed sequels in film history. $2.00

Spaceship Timse Two (1995) - Despite its misspelled title, Spaceship is one of the better Barbarian Brothers vehicles (no pun intended). Two oafish, musclebound brothers stow away to the stars and, after a cryogenic disaster, find themselves the unwitting captains of the lead ship in the Earth Protection Fleet. Another low-budget triumph for the Barbs, but not one of Stanley Kubrick's proudest moments as a director. $3.00