A lot has been said about the inherent racism of the situation in New Orleans. Not being a raceologist like the esteemed Reverend Jesse Jackson my lay-person's view of the situation is that the government incompetence is virtually unrelated to the racial composition of the survivors in New Orleans. They were poor and they probably had to struggle to survive and to receive aid because they were poor.

In other parts of the country poor white people or poor Mexican immigrants would receive, and in the past have received, the same shitty support from the government. While we can all chuckle about Jesse Jackson appearing like the Candyman to cry racism whenever he can there are others on the other side of the political spectrum who are giving his claims some credence.

My favorite among these is former Dixiecrat presidential candidate (he was basically kicked out of the party) Klansman, neo-Nazi and hate monger David Duke. When David Duke's first article about the hurricane is entitled "New Orleans descends into Africa-like Savagery" you know it's going to be good. He sums up the situation:

The New Orleans looting, robbery, rape, murder and mayhem is not about food and water. There are many distribution points. Absolutely no one is starving. No one is dying of thirst, save perhaps for a few hopelessly trapped in their attics from the risen waters. No this mayhem is about the morals in a man, not the amount of food in his stomach.

David Duke: ace reporter! While those darkies are eating steaks and drinking champagne that the US government has given them out of the goodness of the white race the blacks have also turned to looting, murder and rape! Just in case you thought there may be some excuse for looting food supplies or otherwise breaking into stores, Duke reiterates his key point about the lack of direness in their situation.

And as I said these criminals were in cars and could have easily driven to the many National Guard units and would have certainly been well fed and watered if need be.

The blacks of New Orleans are patrolling the city in cars and repaying the government's endless generosity by stealing white jewelry and white electronics! Still not satisfied that he has made his point, Duke contrasts the portions of the country outside New Orleans that have been devastated by Katrina.

In absolute contrast, in the overwhelming European Communities that have suffered devastating wind and tidal surge damage where the eye came ashore in Mississippi, there has been nothing remotely resembling this anarchy and inhumanity of mostly African-American New Orleans. As one police officer in the devastated European-American community of Bay St. Louis, said, "Never have I seen such selflessness, courage and community spirit than as displayed by these residents."

Maybe it has something to do with population density Dave? Maybe the "scattered shootings and looting" we here about in Mississippi are just being squeezed together into a really small area in New Orleans? Nah, that would make too much sense! Duke explains away the white hatred of blacks in this situation as something completely rational.

Are we European-Americans hateful because we don't want our communities to reflect the standards of New Orleans right now? Because we don't want our daughters raped in the midst of crisis, our parents terrorized in nursing homes and hospitals? Because we who suffer loss of home, property and jobs and even the loss of loved ones from a natural disaster don't want such terrible losses to be compounded by robbery, rape, assault and murder!

You can replace the words "robbery," "rape," "assault" and "murder" in the entire article with "niggers." Crime is a black-only problem in the mind of David Duke. Hey, I don't know, maybe crime rates are higher among blacks because a 150 years or so ago slave rates were a lot higher among blacks. Lynchings and cross-burnings might put a chip on your shoulder, buddy. Not fit to just attack blacks, Duke has to work an attack on J-E-W-S into his article.

As you know, Israel has had the chutzpah to ask for about $250,000 dollars to compensate every illegal, land stealing Israeli settler of Gaza. And many American politicians, bribed by AIPAC, are going along with this insane demand. Do you think they will support with $250,000 every victim of Hurricane Katrina, those American men and women who committed no theft or crime and who suffered a terrible natural disaster?

Of course here he is in no way referring to the African-American victims of Hurricane Katrina. They obviously have demonstrated that they do not deserve any aid whatsoever. Talk about gratitude!

Duke's article is also a keen insight into the motivations of others. Nowhere else on the Internet can you find a more vile cache of sleaze and bigotry than the world's greatest political forum: Free Republic. That site has become fixated on blaming the Mayor of New Orleans over not using school buses to get people out of New Orleans, but couched in their obsession with the school buses are tons of hilarious and probably unintentionally racist comments. Take for example their thread discussing an MSNBC article entitled "Why the poor stayed in New Orleans" that explains the failure of so many impoverished to escape the city. 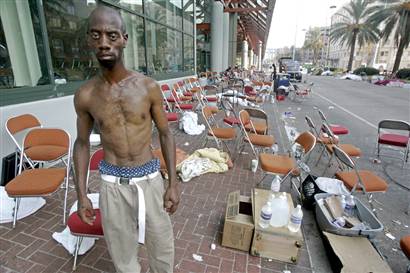 Crammed in between dozens of "school buses!" posts are many more that show just the kind of idiots who are giving a moron like Jesse Jackson something resembling a point. While nowhere near as horrible as David Duke, they are still pretty pathetic.

Yes, more than a hundred thousand people stayed behind so that they could steal TVs. Those guys with no legs were salivating at the idea of a 40 inch LCD. "I just want a new kitchen island with stove for my three screaming babies!"

This was a very popular sentiment. Several people referred to the hurricane as "the toilet flushing" and the people stuck there as "being clogged." Take in that metaphor. Human shit being flushed down the toilet by a hurricane. Way to go.

This is a great one, because this is the exact sort of thing you would not see getting posted on a board like Free Republic if this had happened in an impoverished white area. In fact, it did hit poor and white parts of Mississippi and they are not saying similar things about those. There are tons of these posts blaming the poor for their poverty. Lack of motivation and an entrepreneurial spirit are the cause of this human catastrophe. Oh, and buses, blame the poor and the democratic mayor and governor.

I can forgive these guys their obsession over the buses. It's a dark day for Bush and the federal government and they are clinging to anything they can to blame other people. They're ideologues, just like the dopes at Daily Kos who are refusing to blame the bafflingly stupid Louisiana Governor or the hollering dramaqueen Mayor. What I can't forgive are these low key racist sentiments and lack of sympathy for the victims - the number of "shoot all looters" posts on Free Republic could choke a mule - which give dopes like Reverend Jackson a reason for acting the way they do. Shut up you fuckers! I do not want to see his oversized walleyed face on TV anymore complaining about racism, so fucking stop being racists.