Hilary Swank, Why You Don't Like My Birthday Party?

Chechen President Ramzan Kadyrov made news recently for his lavish 35th birthday party in Grozny, which included live music, dancing and birthday wishes from celebrities including Jean-Claude Van Damme and Seal, the singer not the animal. Kadyrov is known for his love of beautiful women, expensive cars, Hollywood celebrities and ordering his loyal paramilitary force to commit atrocities. Word that Hilary Swank wished Kayrov happy birthday from the stage in Grozny created a storm of controversy in the United States. Hilary Swank issued an apology for attending the event. "I deeply regret attending this event. If I had a full understanding of what this event was apparently intended to be, I would never have gone." This hurt President Kadyrov's feelings very much. 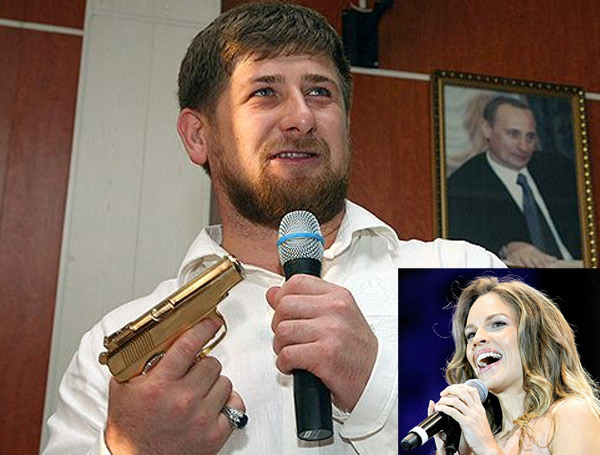 You hear I have put a head on a metal pipe and take through village to scare villager? Nyet. Not me, Hilary. I have give my word if a general does this I will not tell him to do it and I will give him the harshest punishment in Chechnya. This is punishment of head taking off and put on pipe. Is this good for you?

Hilary, we had good time. You like the giraffe I give you? Your gift bag full of diamonds? Why do you throw upon them back inside my face? Ah! It hurt me so much to think these lovely jewels will not gem your body my Million Dollar Baby. 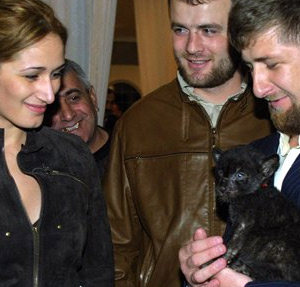 Here is panthergift I give to model from Moscow who died of accidental death strangulation because of loose rope in bathroom not anything with meWhen I am giving a lawsuit to head of human rights organization which dare accuse me of snatching murder of Natalya Estemirova I think of you and these gems you not wear. Rest in assurance, FSB tell me that Tajiks were seen brandishing pistols in marketplace and speaking of caper with Natalya Estemirova. My good name is not involved.

What about Grozny Opera House, Hilary? You promise premiere of movie might be there. Maybe New Year's Eve which is "in production" on imdb? This is good film. Would you like Land Rover deluxe? I promise we will not hold trials of political prisoner in opera house until after premiere. I give you platinum AK-47.

When we release the dove I imagine I am a dove flying out into the sky and you are a dove also and we meet and are happy forever. Would you wear a bikini suit on my balcony at vacation villa? Many famous lady has worn bikini suit for picture including Sharon Stone and Jennifer Gray. I have gone to club with Boyz II Men. Do you like rap song? I get them back again, they do not apologize for anything.

In Chechnya we have special bunker underground we call family prison. It is good prison. Three hot and cot. It is for family of rebel fighter to be in prison until rebel fighter give himself up to my defense squads. You like 24? This is Jack Bauer 24 special prison. High security.

You want a panther I get you panther. If you like you can have sex with panther nobody judge you in my villa. Or you could kill it and eat it. Nobody miss him. One shot behind ear, quick and easy. Painless they say.

Have you ever seen paramilitary death squad brutally beating government soldiers according to 20 charge from international court? No, me either. I have never seen this happen. A lot of people have Amish beard and wear track suit at all of time here in Chechnya. It is basically national uniform. 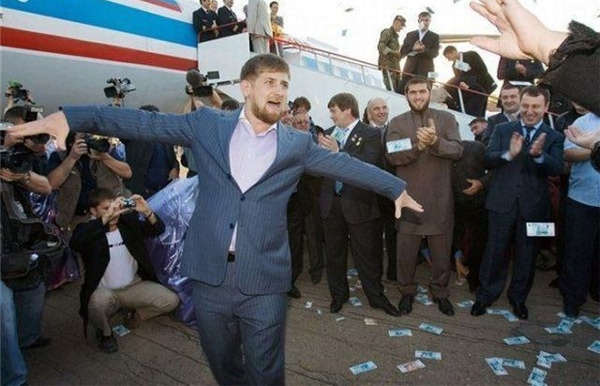 Hilary I think we got off on the wrong foot. I make you deal: we forget all about this, you put on bikini suit and I give you a jet skis. How many you want. Ten jet skis. Snap of finger you have ten jetskis. The air in your face, the salty ocean stinging your skin like accusations that you personally order the execution of journalists. Maybe go slower on jet ski so it does not hurt so much.

36th birthday party in Grozny will be even bigger than last. Fourth place finisher at So You think You Can Dance season of 2008 Courtney Galiano will be there. Everybody I invite special celebrity will get their own Tajik boy child. Do not worry he has been de-scented. If you do not come to this party this boy does cry.

I mean it Hilary. Apology not accepted because you do not ever apologize for this good time we share. Unless you want to return the $6 million dollar blood money fee I paid you from treasury of people of Chechnya (who all love you in Amelia you bring history to life!).