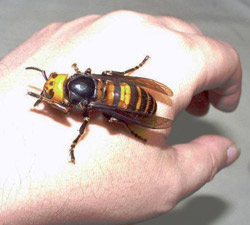 If the Bible has anything to say about the world ending then I'm pretty sure we'll be seeing a lot more of this.I hate wasps.

I don't think that makes me special. Given enough time and a confined area a wasp will make monsters of the best of us. Leave Gandhi alone in a Prius with an agitated hornet and even he would be wielding a rolled-up copy of Hustler trying to brutally rupture a wasp between a passenger-side airbag and the thighs of some girl named Haley. Whoa, whoa, whoa there, Gandhi. I leave you in the car for five minutes to return some DVDs and you ruin my copy of Hustler? There's stinger all over this taint.

Wasps are bugs. Giant, ugly, pissed-off bees. They don't make honey and just ceaselessly build half-assed portions of a hive at the right-angles of your house's exterior. Go out and mow the yard and they will pull some Hound of Tindalos shit, all coming at you from under the gutters and the eaves.

It's hard to guess what motivates them. It could be the vibrations of the lawnmower, it could be they don't like to see someone enjoying some lemonade and a book on the deck, or they just might have the same sort of hatred for us that we have for them.

Having been stung twice by wasps in the first week of July I made their extermination something of a personal crusade. Brooms handled most of their nests and after a few clearance missions I learned that a well-aimed blast of the hose directed at their grotesque mockery of a beehive would drown them before they could even come buzzing at you from their hexagonal corridors. Things seemed to be moving along pretty well, but the wasps were still appearing whenever I would go into the backyard. 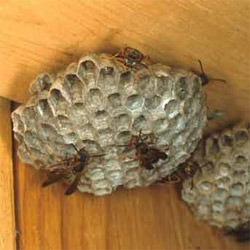 Check out this CAD bullshit that wasps call a house.After about a week I finally managed to locate the last redoubt of the wasps, a sort of hidden bunker located inside an unused plastic shed next to my house. I hesitate to even call it a shed. It's more of a Tupperware closet nestled between my house and the neighbor's. It stores four plastic and bamboo Tiki torches left behind by the previous owners. Oh, and it also stores about a dozen really touchy wasps that don't like it when you open the door and poke your head into their secret lair.

Five minutes and one sting to the eyebrow later and I had retired to my office to draw my plans for a final solution to the wasp question. I might have also done a lot of holding a paper towel full of ice cubes to the throbbing pain in my face. Their base of operations in the plastic closet was a problem. Their nest was located above and to the left of the doorway and could not be seen from the outside. It wouldn't be easy to vanquish this last colony. This was war, but I was not alone.

I was in my garage searching for a secret weapon when my Arab neighbor Kafir pulled up on a motorcycle. He was decked out head-to-toe in white leather, with a white scarf hanging around his neck and a white helmet on his head. He looked like something out of a Saudi Arabian techno video.

Kafir and I aren't close, but I consider him a friendly acquaintance. Hardly the sort of person I would expect to ride up on a motorcycle and offer to help with something as daunting as the extermination of wasps.

"Grass a problem?" He asked, noting the weed whacker I had taken up to feel the heft of as a wasp-crushing implement.

He shrugged, so I pantomimed a buzzing insect landing on my eyebrow and then stinging me.
"Ah," he said, understanding. "The hostile bee! He is a beast!"

I hung the weed whacker up on its hook and continued my search for some sort of weapon. I fantasized about a morning star made out of lava. Something that would simultaneously crush and burn the wasps almost instantly.

"I help," Kafir said. "The wasp, he not sting through this."

"Too thick!" He exclaimed.

It was true, the wasp's stinger seemed unlikely to penetrate the hard leather of Kafir's ridiculous motorcycle costume. A plan took shape. A plan that resulted in me standing three feet away from the plastic closet with a hose dribbling water onto the lawn.