First of all, "Orc Magazine" is not really a magazine about orcs. It's a collection of orc-centric magazine parodies, all of which (except "The New Orker") are just normal magazine names with the word Orc thrown in. I mean, seriously, not that it'd be a good joke, but they couldn't even come up with National Georcgraphic? It's two extra goddamn letters!

Anyway, the content itself appears to be largely generated by fans of the site, which is why "Play Orc" (ugh) is by far the most populated with entries, and why "The New Orker" is completely unrecognizable as a New Yorker parody, except for the fact that it has unfunny comics (which is completely spot on). In fact, I think "Play Orc" has more entries than everything else combined. A cautionary note (though you're an idiot if you click the "Play Orc" link anywhere near work or anyone you respect): The description for that specific parody is pretty far-fetched, unless I'm supposed to believe that somewhat graphic depictions of forced bestiality are treasured by "discerning Orc males." Though, I suppose, that could very well be true, as could absolutely anything else, considering that Orcs are fucking imaginary. For all I know, discerning Orc males could find photos of cell phones incredibly arousing. It can't be too farfetched, because I'm 100% positive there are at least 5 people on the Internet who literally get a boner looking at tech.

Paul, I hope you're reading this. Your obsession with orcs, even if it didn't involve wanting to stick your dick in them, is creepy. (Also, free tip - if you're going to do something embarrassing on the Internet, don't use your real name, especially not as your e-mail address). Yes, the sexual thing is also creepy, but damnit, man, you've gotta own that creepiness. Go in whole hog, don't fucking dance around it looking for deniability. No one believes you, anyway. Just give up and give in, man. 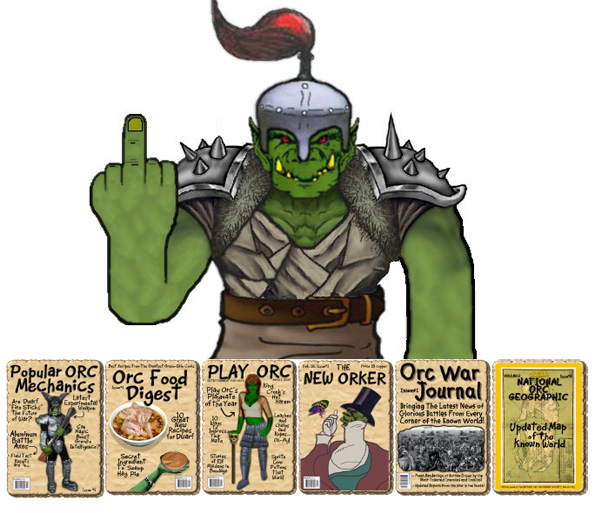