The Wink is Back 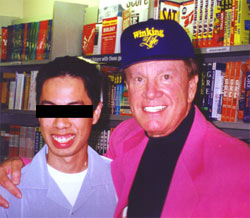 Wink Martindale loves to cuddle, but at all the wrong times.When the sun dies it will expand until it burns away everything on the surface of the earth. Everything except Wink Martindale. Wink Martindale is rock hard and he's on a scavenger hunt for your daughter. He doesn't even care what she looks like: it's the principle of the matter. If you look into a mirror and say "Wink Martindale" three times birds will fall dead from the sky. Wink Martindale is laughing at his own joke and it's about you.

Here are the last 25 words that Wink Martindale said aloud: 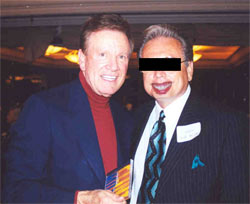 Flowing endless through time and space, Wink Martindale's smiling face.Wink Martindale is shifting the skein of time with his will just so he can win a cakewalk. Wink Martindale is listening to "House of the Rising Sun" because it's about him. He just edited your thesis paper to include 50 instances of the phrase "calling all cars" and he doesn't care if you fail. Wink Martindale has licked an ass, but not the way you're thinking. He's knocking a star off your hotel's rating because your room mints are lousy with mites.

Everything Wink Martindale does is "with release" and he's currently competing in a jetpack race. Wink Martindale believes that birth control is a cardinal sin but considers abortion a form of takeout. Wink Martindale can solve complex mathematical equations in his head faster than a supercomputer, but he prefers to write them out on paper because he loathes trees. Wink Martindale returned your keys but not before making doubles. Wink Martindale plans on rearranging your furniture while you're asleep.

Wink Martindale's iPod is set to shuffle and it's in a burlap bag at the bottom of a river. Amazon recommends the second season of Stargate SG-1 to Wink Martindale, but he already bought it months ago on ebay. Wink Martindale has never set foot inside a grocery store because he always rides on one of those motorized fat guy scooters. Wink Martindale knows good shoes. Biblically.

I'm in you.
I'm within you.
Inside the space,
You hold reserved.
That special place,
You don't deserve.
I will get inside you,
And I will burn you down,
Because I love you like,
The heartworm loves the hound.

At the end of all time and space, when the lightless inexorable whirl of the dragon consumes the last scraps of our reality, when the true dark of nothing is the only companion to that monstrous gravitational maw, Wink Martindale will stand on emptiness and howl at the void. That fire that lights the lantern inside Wink Martindale's mind will surge and flare, and in one brief instant, when all is truly lost and things are nevermore, Wink Martindale will roar with fury and the entire Universe will be remade anew. The cycle begins again. Ten billion upon ten billion stars are thrown out of the unclenched fist of eternity.

Then and only then will Wink Martindale's roar become a laugh and he will settle in for another go. Each wheel turns around a focal point and ours is Wink Martindale, coming this Fall to the Game Show Channel on "Gambit."

I know it has been Zack overload today, but poor wee Frolixo - SA's very own redheaded step-child - is suffering from dental surgery and is hyped up on goofy gas. If you are so inclined you can read my first attempt at our new casual feature: Daily Dirt, where the usually staid SA frontpage writers cut loose and/or chill out. It's like a Live Journal only we don't take personality tests...yet. Think of it as a director's commentary to the main page of SA which you have come to know and dislike quietly. I'm sure you thirst for more of my juicy offerings!