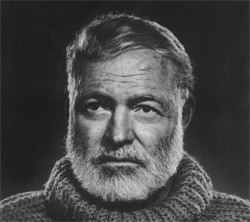 One of the worst things about having a book published is that you begin to think of yourself as an author. You're no longer a lowly "writer," you walk among the greats of literature. You are...Author. Your job description is the same as Hemingway or Joyce or that guy who wrote the Doom novels.

The distinction between a writer and an author is a technicality in a world of micro-presses and custom printing websites. All the change really means is that I occasionally romanticize pounding my keyboard with my fat hands and making words appear on a screen. Which is exactly the problem.

My idealized concept of being an author leads to horrible misadventures, like my ride-along with a Chicago cop and my interview with a man who raises miniature horses specifically to have sex with women in Brazil. Being spit on by a 200-pound man in a dress is not quite as scary as talking to a guy named "Pussyripper" who is shirtless and wearing a ski mask in a barn in the middle of nowhere.

I recently finished the manuscript for another book, but not before becoming involved in several misadventures. I'll save the capers related directly to the content of the book for another time. Besides, those related only to my vain notion of being an Author are far more humiliating.

I was months into the process of writing the book. I had done my research and sketched an outline for the rough draft. I had written parts and pieces of several chapters, but the book was not coming together. These are all the excuses my mind came up with to indicate that I was getting things done.

The sad truth was my final deadline was looming and not a single chapter was completed from beginning to end. Days and weeks passed and the deadline grew closer until it seemed nearly impossible to meet. I began to entertain desperate fantasies of "getting away" to "finish the book." It seemed the Author thing to do.

Abandoning the carefully-constructed cocoon of my office with less than three weeks until my editor's doomsday arrived was idiotic. A terrible idea. I had used up my budget for the book, so getting a nice comfortable hotel room was out of the question. I considered staying with relatives, but all of my relatives shared a stubborn refusal to go somewhere far away while I occupied their houses.

I turned to my friends. 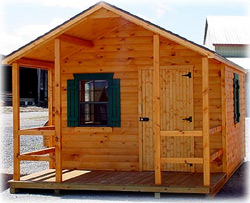 A few were willing to put me up in their houses or apartments, but these were people with families and all of the intrusive distractions I wanted to avoid. I was about to give up when my friend, Terry, offered me what seemed like the perfect opportunity: a hunting cabin in Wisconsin.

Terry sent me pictures of the cabin, a one room wooden structure straight out of a movie, with a fireplace, cots, a genuine outhouse and a big freezer to store dead animals.

"The freezer doesn't work," Terry wrote me in an email. "But it's winter so you shouldn't need it."

He assured me that there were "shooting blinds" already set up and "nobody around for miles." Terry further enticed me with a photograph from a hunting trip in which he was crouching next to the bloodied face of a deer and giving a thumbs up to the camera.

The cabin sounded perfect for seclusion and would also work if I felt the need to hide in a tree and snipe wildlife. I accepted Terry's generous offer and left the comfort of my office for the winter roads of Wisconsin.