A weekend of dashed hope is upon us, with Ian "ProfessorClumsy" Maddison left baffled by the nonsensical Iron Man 2 and Sean "bad movie knight" Hansen (remember him?) checking out the Nightmare on Elm Street remake, only to have his childhood raped in the process. Meanwhile, "SuperMechaGodzilla" puts his mental illness to good use by launching an in-depth investigation into the modern face of the comic-book movie genre.

EXPECTATIONS: Iron Man was a source of great disappointment to me: After all the hype and a very promising opening sequence, it turned out to be a mix of slapstick silliness and weird science. With trailers for Iron Man 2 playing up the presence of Mickey Rourke as a shirtless Russian with electrical whips without giving any clues as to what the story will be, I'm worried I won't make it through this one without my fight-or-flight reaction showing me up as a coward halfway through. Still, at least they have a script this time.

REALITY: As I settled into my seat in hopes of enjoying Iron Man 2, I was treated to an extended preview of the upcoming Avengers movie, which mixes various Marvel Comics characters into the same team for no good reason. I sat watching this preview wondering why such a thing had a right to exist when it dawned on me that this trailer was rather long. 124 minutes later it ended and I realised that I had, in fact, been watching Iron Man 2 the entire time. What we have here is two hours of the most expensive and elaborate publicity material for a film that hasn't even been written that I have ever seen. 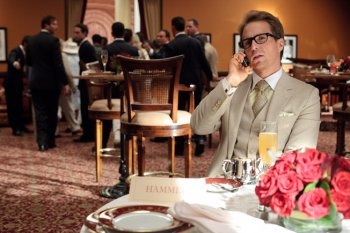 I'm finding it hard to avoid some kind of "Can't touch this" quip here.Picking up where the previous film left off, Iron Man 2 follows the further exploits of Tony Stark (Robert Downey Jr.) as he continues to lead a lifestyle that is literally killing him, both in terms of his social indulgences and his heroics as alter-ego Iron Man. Add to this his doomed romance with secretary-turned-boss Pepper Potts (Gwyneth Paltrow), a rivalry with fellow weapons manufacturer Justin Hammer (Sam Rockwell), a confused relationship with shady government agent Nick Fury (Samuel L. Jackson), a strained connection to his mysterious legal assistant Natalie Rushman (Scarlett Johansson) and of course his constant mistreatment of his best friend James Rhodes (Don Cheadle), and you go from an interesting look at how a man's self-indulgences feed his ego to a rather messy and uneventful story about how a bunch of people do a bunch of things until all the bad guys are brought to justice.

When Ivan Vanko (Mickey Rourke), fueled by vengeance and vodka, tracks down Stark and makes an attempt on his life with big electrical whips, things start to get ridiculous, and the very light plot begins to unfold. Hammer, in an effort to one-up Stark Industries, hires the vengeful Russian and sets him to work on making an army of evil robots, all powered by whatever the hell it is that makes his stupid electro-whips work. Obviously, Vanko's ulterior motives will put a fly in Hammer's ointment as everything eventually stops making any kind of sense and degrades into a lot of science-fiction bullshit and ridiculous explosionings. 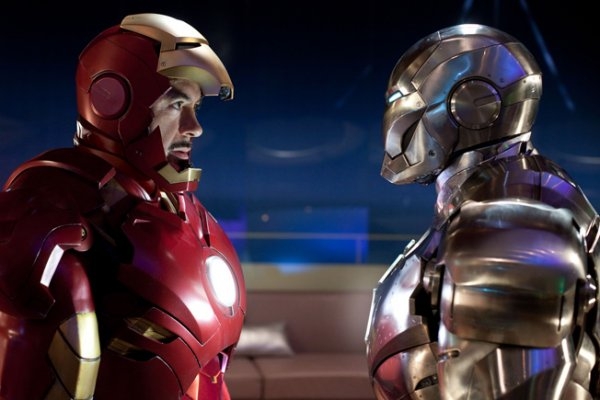 What makes this worse is that the entire film is geared towards raising your excitement for that Avengers movie that I don't care about. Marvel, you see, is hell-bent on dragging all of its characters onto the big screen so that it can establish the "Marvel Universe" in cinemas. The reason for this is to fool people into watching every single Marvel film that is released, just so that you're not confused when they start cramming them all into the same film. Fan of Iron Man? Then you'd better get your arse to see Thor and Captain America because you don't want to be lost when The Avengers is released.

I've probably done a pretty good job of painting Iron Man 2 as a total disaster, but it has its share of positive elements. The cast is uniformly excellent, especially Robert Downey Jr., who once again treats us to his inimitable flubberty-druthers. Sam Rockwell also stands out as Stark's long-standing rival who is way out of his depth in the pool of comic book super-villainry. For the most part, the comic relief elements are genuinely funny, and the first twenty-or-so minutes show great promise by exploring Stark's self-destructive nature in a refreshingly up-front way. 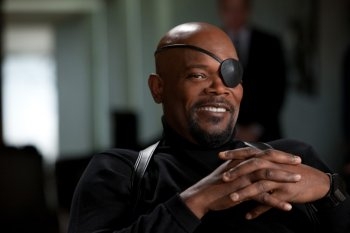 Oh, you don't remember this character from the first film? You obviously didn't stay till the end of the credits. You know, like normal people don't.However, at a late point in the film, Stark discovers a new way to energise his suit that negates the poisonous effects of the infamous arc-reactor that protrudes from his chest. It's like telling an alcoholic that he can avoid alcohol poisoning by drinking stronger spirits. What makes this even more insulting is that he arrives at this breakthrough via the means of magical sci-fi stupidity; waving his arms around at his computer to discover a new element and then synthesising it by destroying his house with a laser beam to produce a glowing triangle that provides the answers to all of his problems. What are we supposed to get from this? That we can exorcise our demons through ingenuity and made-up baloney? That we can continue to destroy ourselves because scientists will eventually find a miracle cure? With no satisfying answers given to those questions, what we are left with is no apparent message at all besides "Don't miss The Avengers!"

The film climaxes (and this is a word that applies only very loosely here) with a sequence in which a lot of stuff explodes and nobody gets hurt. In fact, we never get the feeling that anybody is even in danger, especially our protagonists. It was around this point, when everything was blowing up and I just couldn't wait for the damn thing to stop, that a small child seated near me hit upon an excellent question. It must be said that this child had been quite vocal throughout the film in loudly asking his father about every detail on screen; if this happened during a better film, I would have been annoyed. Suddenly, though, he asked a question that summed up my entire feeling for the events that were unfolding before me. "Dad," he said loudly, "Why did he have to blow that up?"

MINORITY REPORT: Hey now, I can tell you why he had to blow that shit up, son. Because blowing shit up is hella awesome! You ever see an explosion that wasn't awesome? If you have something that isn't awesome and you want to make it awesome... BLOW IT UP! -David "Data Core Devil" del Vacote III