Renowned journalist Bob Woodward turns his imagination to the macabre and pens a collection of spine-tingling tales to keep you up at night. CHILLERGATE collects all his tales of terror in a single volume of supernatural horror that you will not soon forget. 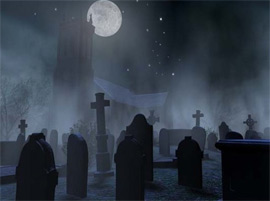 The vampire leaped from the shadows and took hold of her by the shoulders. Mary cried out in fear and collapsed into the nightmare's clutches, baring the white of her throat to his insatiable fangs.

"I thought you had fallen," said the vampire. "My name is Josh. I am sorry about turning into a bat earlier. I did not mean to scare you."

"It's alright," said Mary. But it wasn't alright. Not even a little bit alright. Sometimes you say it's alright just to try to cool down the situation that might otherwise get out of hand. The bat deal was pretty darn terrifying. Although she spent most of the night walking around and talking about current events with the vampire, she knew terror in her heart, for at any moment their pleasant conversation might be rent asunder by Josh's unholy thirst.

"You should probably be getting home," said Josh.

"You're right. I had a lot of fun hanging around this graveyard with you." They shook hands like friends and Mary went home just as the sun began to come up, sparing her from the twisted fate Josh had in store for her.

It Came From Foggy Bottom and Meant to Go Around


"Sorry," apologized the formless horror that shambled through farmer Lyle's fence. The monstrosity rippled unnaturally, dragging a dozen feet of picket fence, a light post, and half of a shed with it as it came onto farmer Lyle's property.

"That's far enough!" warned farmer Lyle. "I have a shotgun and I mean to use it."

"Oh," said the creature. "Alright. I was just trying to get through. I didn't realize this was a whole, yeah, sorry about that."

The creature sheepishly backed away and went around farmer Lyle's property, but farmer Lyle would never sleep again, wondering when the creature would strike next.

The Escaped Lunatic is a Danger to Himself

"Be on the lookout for an escaped mental patient from the Virginia Asylum for the Criminally Insane. The man is over six feet tall and he may be bandaged so--"

Jennifer switched off the radio and shooed the kids she was babysitting up to their room to play video games. She began texting her boyfriend when, suddenly, there came a tapping on the glass of the door. Remembering the radio announcement, she became very afraid.

Then she saw that the man was not a lunatic at all, but a policeman.

"Hello, ma'am," he said when she opened the door. "I am just checking out the houses looking for that lunatic that escaped. Can I come inside and have a look around."

She didn't want to, but he was a policeman, what could go wrong? Jennifer opened the door and the policeman stepped inside. Then he closed the door. His eyes were hidden by the shadow of his hat. Jennifer's heart beat very quickly.

Then the policeman searched the property, but he did not find anyone.

"I wouldn't worry," he said as they returned to the door. "He's not dangerous. He is just depressed and might try to hurt himself. I'll be in the area to make sure nothing bad happens."

The policeman went outside and got in his car and began slowly patrolling the neighborhood. It didn't matter. Jennifer couldn't stop thinking about that escaped lunatic. Could the policeman have been the escaped lunatic? It was impossible for her to know with total certainty in Obama's America.

Those are just three of the bone-curdling tales included. Want more? Bob Woodward has got more! 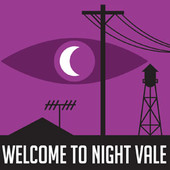 Want to hear something creepy and funny? Former SA writer Joseph "Maxnmona" Fink has a podcast called Night Vale set in a creepy, otherworldly small town. It's like NPR from the Twilight Zone. Each episode tells a story and adds to the strange mythology surrounding the town. Oh, and I wrote the main plot for Episode 18: The Traveler. Check it out!