The Lesser Wisdom of Benjamin Franklin 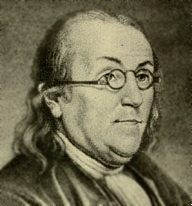 Benjamin Franklin remains one of America's most cherished historical figures. He was an inventor, a writer, a philosopher and a statesman; though he's considered a Founding Father of our nation, the average person may remember him best for the wit and wisdom of his most famous sayings, many of which have passed nobly into cliché.

Among his many projects, Franklin wrote and published a yearly compendium of facts and amusements known as Poor Richard's Almanack. Within the Almanack's pages, Franklin dispensed sage advice: "Early to bed and early to rise, makes a man healthy, wealthy and wise"; "God helps them that help themselves." Though many of his nuggets of wisdom have survived the ages, many more have been forgotten or suppressed due to their questionable merit.

We are proud to republish a collection of Franklin's minor quotations and lesser wisdom.

The industrious man needs no food, for there shall be nourishment enough in the grave.


He who endeavors to drink salt needs fear no thirst.

The working man is fit and fed, and stabs the sluggard in his bed.

Preparation is the burden of fools.

To cross the sea takes naught but a pair of legs and the will to swim.

The nude man catcheth the hen while the clothed man shivers.

Shrewdness can turn one penny into two, but wisdom can turn a horse into a boy.

Save a penny every year and you shall die a millionaire.

For every pound of sand you eat, another shilling's yours to keep.

The wise man learns things, but the fool does not.

A rich man's pockets hold more shillings than spiders, because he is not afraid to grope blindly in dark woodpiles.

Judge a man not by the size of his hat, but by the angle of its tilt.

Genius without education is like a dog without shoes.

No sin withers the soul more quickly than laughter.

It is always better to be diligent, for he who toils with honor dies content, while he who is lazy sleeps with the diligent man's wife.

Save a moment each day by leaving your trousers on while you relieve your bladder. When you have grown old, you will relish not only the time saved but also the warmth and contentment of your marvelous habit.

He who dines on human meat, shall never want for things to eat.

The patient man shall live to bury his sons.

Benjamin Franklin lives with his wife and two adult children in Philadelphia, Pennsylvania. He is over three hundred years old.