A World for a Better World Tomorrow!

Sometimes I dream that I am a super hero with super powers, able to perform such super tasks such as cleaning the toilet without getting my hands dirty, eating more than 16 burritos in one sitting at "Pablo's Burrito Shack and Laundromat," or just generally making the world a better place for all involved. For a long time, these were just dreams I would have, and I would always awaken in the darkness to the sound of my own weeping, knowing that I would never be able to change anything on a grand scale and that I would be stuck in my job as dishwasher at the pallet factory for the forseeable future.

This was the miserable truth of my life, at least until we at Something Awful decided to join forces and create "A World for a Better World Tomorrow," or "AWABWT," an organization dedicated to making the world a better place. Tomorrow. Finally my dream of a New World Order can come to fruition without the danger of being arrested because that damn local sherrif thought I was a bum digging through the trash. Damn you, Sherrif Steve, I told you that I was looking in there for crime. And crime is dirty. So what better place to look for crime than in the dumpster? And just because I hadn't had the time to change clothes for a week or so and there was a cloud of flies buzzing around me and maggots in my shoes does not mean that I am a homeless bum- I have a lovely home on the upper West side. But I am a busy girl. I have six kids to take care of and now I have the world to help save. So clean clothes are not exactly on the top of my list of priorities. Anyway, the mission of AWABWT is basically comprised of three or so simple goals, all of which, when completed, will make the world a better place to live and help to turn it into the sterile Utopia it was meant to be.

You are invited to read through our simple manifesto, and if these goals sound worthy to you, you too can join the ranks of AWABWT.

STEP ONE: No one likes traffic. Well, maybe some freaky guy out there likes it but that person is currently being hunted down and killed as brutally and as inhumanely as possible by AWFABWT special forces. People who live in big cities want to avoid traffic so they end up remaining at home for days or weeks at a time, their skin slowly turning into a sickly pale grey and their body developing festering sores from sitting in the same place for hours. Beleive me. I know this to be true. These people could be productive members of society, but thanks to traffic they are reduced to bitter vegetables not unlike the garden variety of radish or perhaps a carrot that it plucked from the ground too soon. In traffic, a 15-minute drive takes approximately forty-five minutes and it behooves one to remain at home between the hours of 11AM through 2 PM and 3 PM through 6PM lest they squander precious time from their lives staring at glittery "Princess" stickers on the back of a Dodge Neon. In other words, if one has any place to go it is best to get it taken care of in the magical window of time between two and three PM when no one has time to drive anyplace due to the fact that they are too busy planning when they will be driving places at other times. Nothing makes me think, "I wish I had a big old gun so that I could shoot all of these people" more than being stuck behind a jacked-up pickup truck blaring the latest Alan Jackson hit. Even worse is a tricked-out Honda Civic on which some shmoe has spent all of his wages from Taco Bell to give it a gold tail pipe and tinted windows, thereby making a crappy car even crappier. Wait a minute. Shoot? What am I talking about, shoot? I love everybody in this life.

A World for a Better World Tomorrow will take care of this traffic problem swiftly and efficiently. With the help of major construction companies, AWABWT will get rid of forests, buildings, and other nuisances that block the path of the streets so that number of lanes will be increased substantially and traffic will move quickly and smoothly. Note this simple diagram: 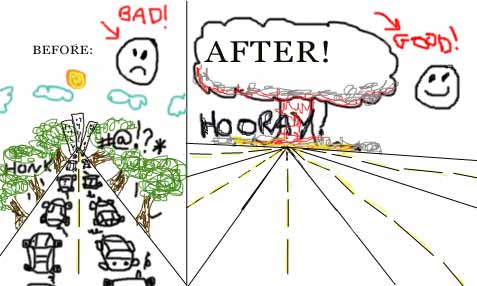 STEP TWO: This step will probably have the greatest impact on the everyday working-class Joe as they will no longer be forced to deal with panhandlers and homeless people whose presence constantly and painfully remind them of their own success. It will also take care of that pesky earthquake problem that seems to be a recurring theme in places like my bathroom and California. The plan is simple. And by simple, I mean the plan is to take all of the homeless people in the world and throw them into those plates in the Earth that grind together and cause earthquakes. This way the plates will be well-lubricated with the bodies of the homeless and the people in the Daylight Lands won't have to worry so much about the Earth cracking apart and killing them. The homeless people will have a very warm place to sleep at night and as earthquakes are fairly rare, there will only be a mass death every other year or so. This way, the homeless population is kept down and us people with homes (I'm talking to YOU Sheriff Steve!) don't have to see them on street corners any more with signs that read variatons of: "Please help me, I'm homeless, boo hoo." Note this convenient diagram:

STEP THREE: The third and final step that A World for a Better World Tomorrow is dedicated to completing is the destruction of all dogs that look like this: 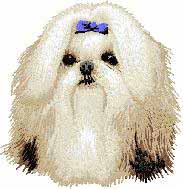 These yappy annoyances are the bane of all those who dare to sleep past the hour of six AM or who wish to enjoy a quiet night of peace and quiet and quiety peace. They are ratlike, sentient sausages and their destriction will mean that thousands if not millions of people across the world will not have to have their lives senselessly threatened by the neighbor lady when she finds the corpse of her maggot-like canine at her doorstep with a note that says, "I told you so." AWABWT will seek out and destroy all of these creepy little dogs. Please note this tasteful diagram:

With these steps completed, A World for A Better World Tomorrow is sure that the world will be better. Tomorrow. But we need your help! If you really care about the world and want to make difference, AWABWT may be right for you. But there is only one way to be sure. If you've got what it takes, you'll be on the way to success and world-saving. After you've completed our simple 16-page personality test, you will be asked to purchase a series of audio cassettes. When you are done with those tapes, others will follow. These will be followed by more cassettes and possibly some books written by our dearly departed leader, which will be followed by audio cassettes of a different kind. We look forward to having you on the team! Don't find us; we'll find you.