The Exciting World of Camp

Scott "King Fresca" Delbagel entertaining E3 visitors the only way he knows how.

Where in the World is Scott Delbango?Scott asked me to fill in for him because he was busy working this weekend at E3 and wouldn't have time to write an article. If you're one of the lucky folks who got to attend E3, you may have seen him or even had the distinct pleasure of touching him. He was easy to spot of course. Scott is entertaining the troops by working as a sexy booth babe. I'm pretty sure he's stealing a lot of hearts.

In Scott's usual cross-dressing absence I have prepared an article using letters and words. If you want, you can even pretend Scott wrote it. I wouldn’t advise that, though. Also, because I'm filling in for Scott, you won't get your weekly comical jab at Zack. Sorry.

The Exciting World of Summer Camp!

Now that the weather is warm, people will soon be turning to the ancient Chinese tradition of summertime fun. Backyards everywhere will play host to patio parties and barbeques, pools, fun sports, and occasionally wandering hobos. And while these are some of the most popular staples of summer, they aren't the only things people turn to for entertainment when the weather gets hot and clammy. In truth, they're merely a mirage in the vast desert that is summer. The real oasis of summer is the classic art of camping. While grownups prefer to sleep at boring old campgrounds, the younger folks are all about attending summer camps. In many ways, summer camps are the lusty sea wench that kids cling to like a spicy hot sexually transmitted disease. Why do kids love summer camps so much? Partly because they're stupid and partly because it's really fun to sleep on a piss-soiled mattress in a rotting wooden building in the middle of some Evil Dead-like forest. But anybody will tell you that summer camps aren't about the sleeping. No sir, they're about the fun!

The average summer camp will beat children senseless with a medley of outdoor activities. Swimming, fishing, canoeing, archery, Greco-Roman wrestling, being molested, ghost stories, ghost Greco-Roman wrestling, Frisbee, and a whole bunch of crap like that will keep kids pacified and too fatigued to challenge authority. When the kids aren't busy partaking of the many fun activities they're usually being herded into wood shanties by scary camp counselors covered with tattoos and tract marks. The counselors are fun, spirited people who are eager to help kids experience the benefits of secondhand smoke as well as the full colorful rainbow of creative words there are for women. 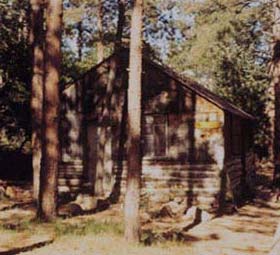 Summer camp can be quite exciting and beautiful, as shown in this picture.Unfortunately, some summer camps also double as slave camps. So while kids at these slave camps will get a healthy dose of exercise, it will most likely be from mining clockworks in the massive underground Seth Thomas clock mines that reside beneath most campsites. Even if they do work as slaves, kids will still have a great time. The strong ones, anyway. The weak ones will perish insuring that the brawny have plenty of extra meat to survive on. That's all part of the great cycle of life, though. Survival is what summer camps are really about. Parents send their kids to summer camps to turn them into men, or in the case of girls – frigid militant lesbians. A boy who has attended any decent summer camp will have the motivation to hack his own arm off just to avoid scratching a mosquito bite. And that's just the kind of determination we want to put in our youth! You know a kid is fit to survive in the world when he can hollow out the insides of his best friend and use the open cavity as a crude shelter. That's valuable life experience! But as good as the average summer camp sounds, even it isn't enough for some kids. Some youngsters are too hefty to adequately enjoy a regular summer camp. These junior plumpers need a tailor-made camp, much like they need tailor-made clothing to wrap around their globe-like figures. Enter: the fat camp.

The fat camp is the front lines of the war against obesity. It's the worst fear of an overweight child. It's like a silver bullet that would go straight through the heart if it didn't have to travel through so many thick layers of fat. Thousands, perhaps millions of portly children die in fat camps each year. Every overweight kid fears the fat camp in the same way they fear death, and rightfully so. It is the end of all things, and rarely the beginning. When it is the beginning, it is merely the beginning of years of reflecting on tortured memories of being denied sweet, sweet sticks of butter when they were needed most. Fat camp survivors often suffer from emotional trauma and an extreme phobia of food. Some even starve to death just to avoid going back. Fat camps are sort of like modern day concentration camps for the obese, save for the fact that concentration camp counselors were a hell of a lot meaner.

There are even other types of camps as well, the least noble of which is the science camp. The science camp is typically a haven for the aspiring John Carmacks of the world to make jokes about Roy G. Biv and discuss just what amazing natural forces make a paper airplane fly. In other words, HERESY. If there is one thing worse than pudgy kids, it's smart kids! They irk me in a way that few things on this Earth irk me. These kids will spend the entire summer building miniature rockets, conducting goofy science experiments, and behaving not as men, but rather as extremely girlish women. These are the type of summer camps other summer camps pick on. They make a mockery of humanity and all things associated with summer and fun. You can't even classify a science camp as phun, because it's not radical enough to get the coveted hipster spelling. And don't try to use some fancy science spelling, either. The pH levels at science camp are dangerously uncool.

Finally, it just wouldn't be summer camp article if you didn't mention that whole wide range of disease-themed camps. Just about every major affliction out there that at least two kids are dying of has a summer camp dedicated to it. For example, children who suffer from cancer can attend cancer camp. It's just like all the other camps, except everybody just kind of lays in bed the whole time. We're talking total chemotherapy for summertime boredom! Forget sports and all that stuff, because these brave lads are too ill to exert themselves. On the plus side, disease camps do provide kids who would otherwise be stuck at home with a good chance to briefly go outside and see just why most people stay indoors all the time. And hey, where else can you go to play card games for a week?

I won't even mention those damn furry camps.

Ah, summer camp, it's easy to see why you please so many. Wait a second! Summer camp is a painful experience for everyone. I can't think of a more atrocious way to spend a summer than to be stuck in some scary cult compound far away from home with a bunch of pesky kids you don't even know. Add the creepy camp counselors into the equation, all of whom have to undergo extensive background checks that prove they are completely unfit to be around children, and you've got yourself a toxic beverage I wouldn't even serve to my least favorite breed of dog.