Hey it's your neighbor! We've never actually spoken to one another, but of all the words that have violated your tender earholes throughout your entire life, more have originated from my bleating mouth than from all of your loved ones combined! Do you know why! Because I am constantly screaming!

You and I live in entirely separate structures! There are several walls, more than twenty yards of space, a fence, and some trees between us! Amazingly, you can hear me yelling at any time of the day or night! It's almost as if the volume of my voice is extremely loud! It can't be, however, because you'd think that if I was abnormally loud I would notice and that would make me self-conscious enough to stop screaming every god damn thing that pops into my malformed head! 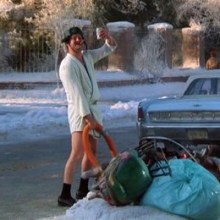 Hope you like animals! I sure do! I'm always gathering more and yelling at them! They seem to grow in number each time I scream, which is a lot! I have a ton of dogs that I never pay attention to! They just bark all day in my yard until they get bored of me yelling at them to shut up, then they get into your yard and growl at you if you open your door!

I think I've got horses too! I'm not sure why, as I certainly don't have a big enough property to care for such gentle beasts, but there they are! They're good animals for yelling at too! Nice and big, so the soundwaves have more surface area to bounce off of!

Also, birds! Holy shit, do I have some birds! I've got several turkeys, a rooster that constantly thinks it's dawn, probably some toucans, parakeets, and some great god damn big thing that sounds like a duck mixed with a car horn!

They're all outside, naturally, not in my house! You must be nuts if you think I'd keep all those loud animals close! They're right next to your fence in some tiny enclosure that I built, because I'm a fan of having animals in small spaces and not paying attention to them aside from when I yell at them!

You know I built that bird prison myself because when I'm not yelling I'm bashing a hammer into things! Always! Sometimes I even do it while I'm yelling! I must be the worst carpenter in the world because I've smashed enough things with power tools to build the Great Wall of China around my property as well as soundproof my entire house, but the only result you can see is Bird Auschwitz and a mangled abomination that looks like a pile of lumber attached to the ruined engine of a biplane!

Sorry, I was just yelling for Carol! I do that a lot! I don't even know a Carol, but I figure if there's a hidden Carol in my house it's best to let her know that I know she's there! That way she won't jump out and scare me!

You know the best time for fireworks! Any time! I get so excited about the fourth of July that I stand in my yard in the middle of April and light off every firework in the universe! Usually after midnight, while yelling!

MERRY CHRISTMAS have some more fireworks! Or maybe I'll just shoot my gun into the air instead while shrieking! Don't ask me how I got an Uzi! Okay, I won it in a yelling contest! I wasn't even an official participant, I was just talking to the cashier at the supermarket a few blocks away and they drove over and handed me the trophy and the gun!

I don't know if you like music but I sure do! Rather than cranking up my favorite songs every once in a while for a bit of fun, I always point my speakers directly at your house, open all my doors and windows, and turn the neighborhood into a The Who concert - without the good music! I really love country! Not Johnny Cash or good bluegrass like Alison Krauss, but modern pop country! You know, the kind of music that has a bassline that goes bWOOp - bwoop roughly three hundred times and never changes from song to song! I only have one album but that's all that I'll ever need!

Hey I should probably get going! I bet you have a lot to do, like researching the real estate market on the opposite end of the Earth, or looking up ways to make yourself deaf with everyday items you'll find in your house! Just remember that even if you no longer hear my incessant screaming, you'll still feel the reverberations!

Oh wow I just found my jackhammer! This calls for a celebration! Hope I have enough fireworks to rival the amount of explosives we dropped in the Iraq war!