You've Won This Round, Harpoon In My Face

I really liked her, you know. I hadn't been involved with anyone in a painfully long time, and had all but given up on the idea of meeting someone I'd want to spend the rest of my life with. But then that beautiful girl with auburn hair in a bob approached me and struck up a conversation (at a mini golf couse of all places) and suddenly I found myself falling hopelessly in love. She was mysterious and a little quirky, made evident by her fascination with Cheap Trick's guitarist Rick Nielsen. At every opportunity she peppered our conversation with such interesting facts as: 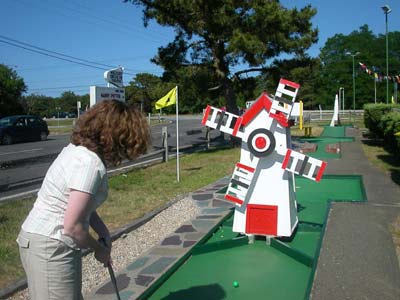 While those were the only facts she seemed to know and they were technically just the same fact told two different ways, I found her enthusiasm endearing. Things were going great, then after an entire half an hour of deep and meaningful conversation on the wooden bench by the 13th hole, she suddenly became alarmed.

"Oh my God, is that a harpoon in your face?"

I tried to play it cool.

She didn't buy it.

"Well there's something impaled in your face and it looks exactly like a harpoon."

"Oh, it's probably just one of my freckles. The lighting here is really weird."

"No, it's not a freckle. It's four feet long and sticking out of your eye socket."

I needed to change the subject fast.

"Nonsense. So, tell me more about yourself. What's your favorite harpoon?"

"It's not nonsense! If you don't believe me go check your reflection in the window of that little windmill over there, this is really freaking me out."

I obliged, hiking with her for nearly an hour before we reached the windmill on the outskirts of town which she had pointed toward.

Of course she didn't give me her number and it's all thanks to you, harpoon in my face. The whole debacle prompted me to re-evaluate our relationship on the drive home, and upon reflection I'm sorry to say that I think you've been more of a negative influence on my life than a positive one.

I know that's a bold statement but think about it. We never talk. You completely forget my birthdays. You've damaged my optical nerves beyond repair. Not once do you offer to help out with the rent or at the very least lend a hand in daily chores. And as important as all these day to day annoyances may be, they are minor compared to the numerous incidents I've had to suffer through that were similar to the one involving the mini-golf girl.

Take, for example, the time you got me fired from that fine china store. Working in a cramped store full of thousands of delicate and priceless items with a four foot harpoon protruding from my eye socket proved to be an impossibility. Instead of a button-up shirt the shop's uniform called for a t-shirt, and there was no way I was going to be able to put one of those on with you in the way. I didn't even get to work a single day.

Then came the time I went to get fitted for a pair of glasses. What a disaster that was! Why did my optomologist have to have such incredibly small revolving doors at the entrance to her office? I had to cancel the appointment and wound up settling for contact lenses.

The worst though, was my father's death. My father, the man who influenced me more than all my teachers and cultural heroes combined. Dead. I didn't think I'd ever be able to forgive you when the funeral turned out have a "black tie, no harpoon" dress code.

Throughout all these years I've believed that you were a kind-hearted individual that was always there for me when no one else was, but you know what? I'm not so sure about that anymore. After tonight you've left me no choice but to operate under the assumption that you are an outright enemy and react accordingly.

What will I do? Terrible things. Maybe I'll do nothing at all and let you stew in your own guilt juices in agony, or maybe I'll extoll the virtues of industrial fishing nets and spears out loud. Don't think I'd go that far? You have no idea what I am capable of. Maybe I'll start an online petition. Imagine several hundred digital signatures united against you. Could you handle the brunt of such an attack? I think not. Maybe now you have begun to see that when I am backed into a cage, I am like a ferocious caged rhinocerous.

Hell, I haven't ruled out the nuclear option that would remove you from my life for good in one surgical strike: draping a tablecloth or doily of some sort over you.

Revel in this momentary triumph, my old friend, my newfound enemy. Remember what victory feels like so that you might dream about it in the cold months to come.