Interview with an Actress: Sexism in Cinema 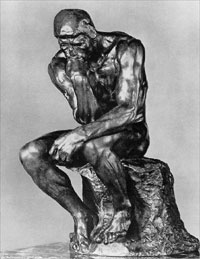 The Thinker: a stirring image of a dude thinking.Something Awful has often been accused of being puerile and immature, of catering to the uncouth and the uncultured, and of being unwilling and unable to tackle serious and sensitive topics in a mature manner.

Being an educated and worldly man, I do not take these accusations lightly. Since I’m now writing for the front page of this site, I feel that it is my duty to guide the editorial policy of Something Awful toward a more mature discussion of important cultural issues. I do not consider Something Awful to be a juvenile and immature website; I think that this is a site for adults, and I am interested in discussing adult issues in an adult format.

One adult issue that’s been burning my britches lately is sexism in cinema. Did you know that over twice as many men win Academy Awards for acting than do women? Did you know that no woman over forty years old has ever appeared in a film playing anything other than a stereotypical black “mammy” figure? These are disturbing facts that require frank discussion, so I have taken it upon myself to root them out by doing a hard-hitting interview with a famous cinema actress.

Since I’m interested only in mature and intelligent adult discourse, I posted this advertisement in a Hollywood industry trade publication:

I very quickly received a reply from a representative of an actress named Texas Presley. Her representation described her as a “rising adult star,” which is exactly what I was looking for; a child actress would not have the level of maturity required to participate in a truly illuminating interview. However, I was shocked at her fairly gratuitous publicity photo: 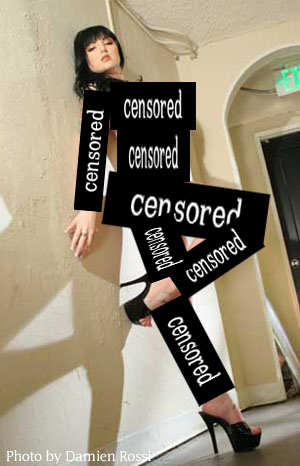 Dr. Thorpe: Thanks for agreeing to be interviewed, Ms. Presley. Since I'm a hard-hitting reporter, I am going to start with a hardball question: the PR photo your agent sent me depicts you in a very provocative state of undress. Are you worried that you'll be hired merely for your sex appeal?

Texas Presley: I certainly hope so!

DT: Don't you find it degrading, though, that producers and audiences might see you as some sort of sexual fantasy object rather than as a serious actress?

TP: Hmm, that's a good question. I think I can sum it up by saying that I think I’m a very serious sexual object. Who also acts.

DT: So are you saying you are using your sex appeal to get ahead in an industry dominated by male actors?

TP: No. I'm saying I'm using my industry to get head from male actors. Also, I wouldn't say it was male-dominated. Just as many women get head in this industry as men.

DT: I'm not exactly sure what that means, so let's move on. Are you worried that your provocative press photo might give producers and casting agents the impression that you're automatically willing to do nude scenes? Perhaps even regardless of their artistic merit?

TP: Well, the willingness to do nude scenes in this industry has to be pretty high, love. Regardless of artistic merit. I mean, sure, I'd like to be seen in good lighting, and have flattering angles, but there's not a lot of flattery when the camera is shoved between your legs. You can't expect too terribly much. You can only hope you’re coming across in a sexy way. Also, some directors are specifically going for the very dream-like and visually appealing scenes. It’s not always solely about the sex.

DT: That seems like a double standard, though. Many famous male actors never have to be completely nude for their films, isn't that right?

TP: Um... I don’t think we're talking about the same movie industry, Dr. Thorpe. As far as I know, a lot of people agree that male talent in movies is basically more a prop than a lead.

DT: It says in your press kit that you've worked with Nectar films and Vivid Pictures. Are these indie film studios? I'm not familiar with them. 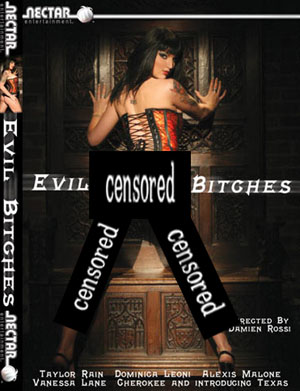 TP: Oh dear. How can I put this to you in a way that won't make you uncomfortable? I fuck on camera. Vivid is one of the leading production companies of pornographic material.

DT: Well, many artists consider their work akin to the act of copulation; they're putting their bodies and souls on the line and being "penetrated" by the public. Is this what you're referring to?

DT: Wait a minute; are you saying that you literally copulate on camera?

TP: Actually, yes. That’s exactly what I'm saying. I am one of the many contributors to the age-old tradition of pornography.

DT: I don't want to sound rude, but are you entirely sure that's legal? Because honestly, I think it might be illegal. 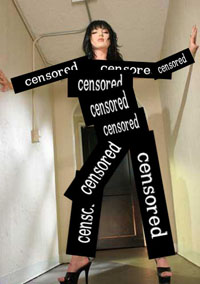 Please avert your eyesTP: I pay taxes on my "body of work" the same as everyone else.

DT: So the government is aware of the fact that you fornicate on film and turns a blind eye, or worse yet, allows it?

TP: It is! Which is what gives it that edge that makes it all the more enjoyable. Imagine getting a check for an absurd amount of money for simply enjoying sex, and looking hot while doing it. There are worse jobs. Ever watch yourself in the mirror during sex?

DT: Uh, this interview is getting extremely personal, and not in the Barbara Walters way, so let's get this back on track. Do you find that your career in these underground pornographic films hurts your career as a serious film and stage actress?

TP: Well, First of all, the movies I'm doing are far from “underground.” And to be honest, I have no real desire to become a professional film or television actress. I'm not good with memorizing lines, unless they consist of mostly curse words, such as "fuck," "cock," "pussy," and "God."

DT: Obviously you've been brainwashed by some sort of evil sex-pervert cult. Let me look up the phone number of a battered woman's shelter, the nice people there will explain to you that women aren't supposed to enjoy the process of human breeding. 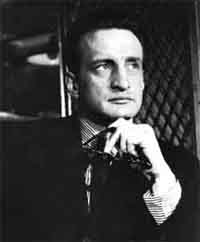 The late George C. Scott would not approve.DT: As a cultured and worldly man, I feel that I ought to explore the seedy pornographic underworld like George C. Scott in "Hardcore." So, when you agree (or are forced) to do one of these disgusting films, how are you contacted? Do they blindfold you and lead you to some alley or warehouse at knifepoint?

TP: That’s only in my private life. Actually, the adult film industry is put together in the same way the mainstream film industry is. We are booked through agencies (not everyone, of course). We have screening and testing for STDs/HIV every 30 days to ensure that our health is in tip top condition. Some people have publicists. It's all marketing and connections, like in any industry. I go through ExoticStarModels.com for my bookings.

TP: I certainly hope not....I try to work with directors who are pretty high standing in status and have a good reputation. If someone I’m about to work with has a history of murdering people, typically I try to cancel the scene (that was sarcasm, of course).

DT: Sarcasm? So you don't cancel a scene, even if you're working for a known murderer? That's absolutely outrageous.

TP: Honey, there are no known murderers in the adult film industry.

DT: Even if you're not working specifically with a known murderer, though, aren't you concerned that some hulking sex-crazed lout will strangle the life out of you during a scene? I'm assuming the male actors are mostly half-witted sex maniacs kidnapped from insane asylums or junkies working for their next fix. 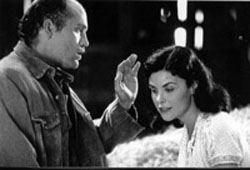 DT: Haven't your friends and family tried to rescue you from the seedy pornographic underworld? I don't want to keep bringing up "Hardcore" starring George C. Scott, but everything I know about pornography, I learned from that film.

TP: Actually, my close friends have all been quite supportive. It's no real surprise that I chose this industry. I've always been a very sexual person, and enjoyed the idea of being watched. Turning people on. Making them excited... I get off on that. Of course that’s a very run-of-the-mill response, but that’s why we're all in this business.

DT: Well, as a journalist, it would be unethical for me to interfere with your lifestyle. However, I do want to assure you that society would still accept you despite your past. You might have to live in a halfway house for a while and maybe get a job as a nun, though.

TP: Well, I appreciate the idea...however, living in a nunnery sounds like, quite possibly, the worst kind of torture. As far as a halfway house is concerned… maybe in a few years.

DT: So when you were originally kidnapped and forced into the pornography industry, did it take you a while to get used to the concept of fornicating for the enjoyment of others?

TP: Doctor, for such a smart man, you can be quite dense.

DT: Well, consider how I must feel. Obviously, I'm not sure how much of what you're saying is true and how much of it is just the brainwashing talking. 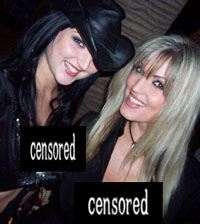 Texas and fellow degenerate Janine Lindemulder.TP: I assure you I’m speaking to you from the heart. I have quite a firm hold on my brain activity, but thanks! I was never kidnapped and forced into this industry. I was admiring it from afar for many, many years. I've always had a fascination with pornography. I mean, from a very young age, I always thought of the actresses like real movie stars. Janine Lindemulder has always been my favorite actress. I think she is just so amazing.

DT: Assuming that our erudite, well-grounded, non-pervert readers want to research your films for completely scientific and sociological reasons, can you tell us a little bit about your upcoming projects?

TP: Well, to date I think I've done about 22 movies, for several companies: Lucky Media, Vivid, Hustler, Nectar, New Sensations, Dvsx, Platinum X, Red Light District(formerly Anabolic)… I'm on the cover of a lot of my films, so be sure to really get a good browse going in the adult store.

DT: Thank you very much for the interview, Ms. Presley. I wish you the best of luck in repenting, changing your wicked lifestyle, beating your brainwashing, and joining a reputable church.

TP: Thank you, I'll be sure to give Pat Robertson your best wishes.

DT: Oh, I'm not religious myself; I just think it might help someone in your tragic position. Thanks!

For more information about this tragic and exploited young woman, you can visit any number of web sites that peddle her flesh like a commodity. You might look at her official site (DOWN for now), her professional biography (not safe for work either), or this den of filth (even less safe for work) which features several of her upcoming projects. I feel that I must apologize for exposing people to this material due to the distasteful nature of it, especially to those of you who have never before heard of pornography. Nevertheless, the dark and slimy underbelly of the pornographic film industry, once shrouded in mystery, has finally been laid bare by my masterful journalism. Hopefully, now that this shocking exposé has been posted for all to see, no more young women will fall prey to the despicable perverts who brainwashed and corrupted the beautiful Texas Presley.