Zack "Old Woman Spooner" Parsons finally broke the big time! His new book, "My Tank Is Fight", is out today, and you should all buy it so Zack doesn't have to live in a cardboard box anymore! You can pick it up at Amazon or Barnes & Noble. I'm sure you already saw Thorpe's promo, but here's one last look at the cover for those of you who were on the fence (you really should buy it): 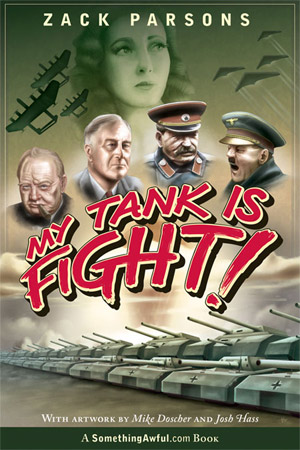 The Wikipedia page for the New York Mets is well over 7000 words long. Oddly enough, neither the word “suck” nor “faggot” appears once in the article, let alone 3500 times each, and a Wiki search for the phrase “fruity ball-licker” doesn’t yield one result pertaining to the Mets. This tells us two things about Mets fans: they are clearly in denial, and even if they aren’t they clearly know nothing about Tom Seaver.

The problem with the Mets is they have trouble finding a middle ground. Any given season you can guarantee one of two things will happen to them: they will suck or they will go to the World Series. Nobody can explain why it happens, but it does. It’s a documented phenomenon. Right now, even as you read this, sportswriters over at ESPN are writing up halves of World Series preview articles because they know the National League end of things is already wrapped up. Next year there is a 50-50 chance the same thing will happen. If it doesn’t, you can guarantee they’ll start their season 10-30. The sports community will be positively ablaze with Mets speculation until Terrell Owens distracts them when he cuts a fart while he’s driving by a church or something.

Consistency problems aside the Mets are facing another issue, namely that nobody knows who the fuck the Mets are. I’m talking nobody, man. The people playing for the Mets have no idea who’s signing their paychecks. I’m no statistician but I guarantee you most of them think they’re playing for the Yankees, and even those who don’t probably start wandering towards Madison Square Garden if the team doesn’t hold weekly conferences outlining the difference between a basketball and a baseball. Here’s a little test for you if you don’t believe me: turn to one of your buddies and ask him if he knows who the Mets are. If he says “no” you have an honest friend. If he’s says “yes” he’s a goddamn liar, and he probably would have said the same thing if you asked him about a team called “The Flippery Floo-Flahs”. You know that kid who had the gold-plated Japanese copy of Super Mario 3 months before everyone else because his uncle worked for Nintendo? Biggest goddamn Mets fan you ever met.

Assuming they do go deep in the playoffs, however, it will be because of one man: Pedro Martinez. Martinez (or “P-Mart”, as he’d be called if MLB top brass decided the league wasn’t gay enough and brought in NBA announcers to cover games) has to hurt himself if the Mets have any postseason aspiration. If not they might feel some obligation to play him, and we all know how that would go. New York fans are a cantankerous lot, and it wouldn’t be surprising to see ol’ Pedro reenacting the opening scene of “Kingpin” if his playoff pitching strategy included giving up 17 runs a game. It would be funny to see him do the whole “pointing at god” thing with a bloody stump, but that’s probably sacrilegious and the last thing we need is another curse on baseball (I guarantee god could find a way to make it more boring). Edit: Shortly after this was written several news outlets reported Martinez will undergo rotator cuff surgery in the near future. I say more power to him. Pedro “Chad Pennington” Martinez has a certain ring to it, don’t you think?

Past all this baseball crap I have to say I really take umbrage with the Twins’ name. It refers to the Minnesota “Twin Cities”, St. Paul and Minneapolis, and alludes to the fact that there’s something so interesting in Minnesota the world is better for having two of it. I’m fairly sure there’s an abundance of both snow and fat people in several non-Minnesota states, and I don’t think the sudden disappearance of either Twin City, MLB club and all, would shake anyone past a noncommittal “that sucks”.

Since they come from Minnesota and haven’t captured a World Series since their 1991 matchup against the Braves, you might think the Twins are totally without merit. This is incorrect. They actually have a beautiful history, and have launched a successful rebuilding campaign on the back of a pitcher named Boof Bosner. Say that with me, folks: Booooooof Bosner. Not “Poop Fondler” or “Goose Sauna”, Boof Bosner. Can you imagine going to a game and hearing that name on a loudspeaker? What if the PA had a short somewhere and every time he struck someone out the announcer sounded like he said “Moof Podcast”? Would the fans in the crowd grab their iPods and try to find funny recordings about bunnies fighting dinosaurs? No, they wouldn’t. Why? Minnesota has yet to discover electricity, let alone MP3 players, and the average Minnesotan probably thinks an “iPod” is what happened that time a spider laid eggs in his eyeball.

Alongside Boof the Twins hope to go deep in the playoffs with help from reliever Dennys Reyes. Using my “Kyle Lohse” theory from this Pregame Wrapup, I have to question the Twins’ reasoning here. When a man is named after a restaurant whose trademark dish is the “Grand Slam”, one would think a team would want him hitting balls, not throwing them. I suppose my theory could work backwards, though. Maybe he’s known as “Explosive Shits Reyes”. Maybe batters associate him with headachey, chest-burning grease-pukes and that awful smell meth addict waitresses get when they forget to brush the sores on their gums. Fuck “The Rocket” or “The Reaper” – if you want to see real fear, go pull some hungover baseball player out of his bunk and tell him you’re “going to Dennys.” If you’re smart you’ll wrap your shoes in Saran Wrap first.

The Tigers started their season looking like the best team in baseball. The hot streak didn’t end until the final third of the season, when they lost approximately eight billion games in a row. This, of course, sent Detroit sports fans into a rare violent rage (rare in that it wasn’t kicked off by basketball shoes or programming on UPN).

With Casey pawning various parts of his body to Satan to ensure their failure, the Tigers will probably find themselves in a rough spot in the playoffs. It’s hard to field a ball when the sky constantly looks like a bubble filled with fire and blood, and the large, red-eyed bats circling Detroit are surprisingly adept at picking home runs out of the air. Hopefully Casey will be able to help the next team he goes to. Cincinnati actually looked pretty good with the whole “pillars of fire erupting from the bowels of churches” thing.

Jokes aside I honestly don’t see the Tigers escaping the first round this season. Generally “maybe next year” is a term you apply to a baseball club, but I think they should turn it towards endings like “the unemployment rate will go down” or “the drinking water will stop smelling like fecal matter and homicide”. You don’t just find professional sporting clubs in the sewer systems of Detroit. There are also dead white people!

Still reeling from the devastating loss of Brien Taylor, the Yanks are looking for a little luck in a league that gives them no respect. I know I tend to root for the underdog a bit too much, but I will tell you this now: once those guys get a steady fanbase going, start raking in a few bucks to lure some big names out towards their neck of the woods... I have a feeling they’re really going to be something special. You can take that to the bank or my name isn’t Jeff “Sandwich” Saturday.

If the Yankees do have something going for them in their struggle to be an AL elite team, it’s that Terrell Owens tried to kill himself. No, seriously. As you may recall, the weeks leading up to TO’s stomach pump adventure were hell on the Yanks. Their fans, who apparently shunned basic statistics when they learned they couldn’t be worked into a joke about public transportation (“hey, Vinny, a black guy would be 25% less likely to get that cab”), decided 35 home runs and a .290 average wasn’t good enough for their pinstriped warriors, and thus turned their noses up at Alex Rodriguez. The sports media played shark to the river of pastrami-tinged period blood pouring out of their vaginas and dug in. Then, after weeks of “RODRIGUEZ STEPS ON CRACK IN SIDEWALK; MOTHER FEARED DEAD” headlines, TO finally decided he wasn’t getting enough spotlight. He ate a handful of Hydrocodone, and the rest, as they say, is history. Or proof positive that ESPN won’t stop running stories about Terrell Owens until he gets his bottom ribs removed and starts blowing himself in the middle of press conferences. Whatever.

After that drama the Yanks got back on track, and now they’re in the playoffs. A lot of people want to write them off, but I think this year’s club shows quite a bit of promise. Rodriguez, despite all the drama, is a down-to-earth guy and a great locker room presence. If the club runs into scoring trouble, Jason Giambi can use his boyish good looks to charm a rival pitcher or two. Worst comes to worst, Derek Jeter can even lend a helping hand by steering his maiden vessel, the USS Cocksucker, right into the hearts of fans around the nation.

When you don’t have a lot of money you have to be resourceful. If they can offset their small budget with some big heart, the Yankees have a chance to take it all the way this year. If they could just get a wacky (but kind-hearted) ghost to push them along, this would have all the makings of a Disney sports movie. I wonder if Bobby Abreu’s talent has an agent.