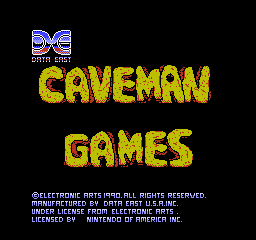 At a Glance: It's finals week, and that means in addition to professors telling me "Congratulations Eileen this is the best term paper ever written by anyone ever ONE MILLION PERCENT GOOD JOB!!" I get to play an incredibly well-made video game. Speaking of hilarious fantasies based on lifetimes of broken dreams, remember my hypothesis about the popularity of ninja games? Basically my idea was that emotionally stunted Japanese businessmen wanted to fantasize that they were "something more" than lonely Neanderthals. Well, it seems that the "caveman genre" was almost as popular in the 8-bit era as the ninja. I'm not really sure how to cope with this other than sticking my head in the proverbial oven.
Platform: Nintendo Entertainment System, 1990
Know a terrible ROM? Email me! 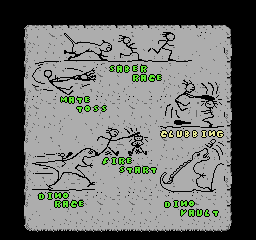 Pick your poison.Story: Caveman Games isn't the name of Jack Thompson's latest hard-hitting essay about the danger of murdering virtual hookers. Sadly. See, it takes all of the glory of the Olympics and adds... uh, cavemen. Specifically, these are horrible vomit-sprite cavemen with backstories detailed more lovingly than a 12-year-old's Naruto fan character. Actually, the profiles are the only thing somewhat good about the game. They might be idiotic, but at least they're cuter than, say, syphilis. In most cases.


Gameplay: When a responsible game developer realizes they've got a half-baked idea, they throw it away. "Cavemen playing tedious sports" belongs in an incinerator in the depths of the Ninth Circle of Hell, but that didn't stop Electronic Arts from whipping it up into a Brian Jacques-level feast of rotten mini-games.

Like many games of the era, everything revolves around trying to wrangle blipping, beeping bars and meters into submission so that your sprite can perform an unrelated action. Despite there being a grand total of 5 buttons on an NES controller, Caveman Games somehow makes this complicated by arbitrarily changing which buttons do what in the middle of their games. It's at the point where anyone's copy of the instruction manual must have been highlighted and annotated more than an Evangelical autistic's Bible.

Mini Games: "Call them Lesion, for they are festering."

Dino Race: The directions claim you "tap A to sprint," but you have to tap at at tempo apparently discernible 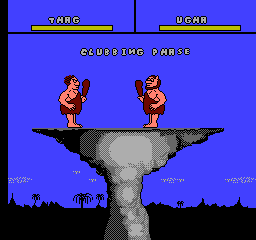 Every kid has one.only by an expert astrologer to so much as crawl. I decided to hold down the B button and bounce the whole way, which was slow and strategically useless but synced up fabulously with Freddie Mercury's "I Was Born to Love You."

Fire Starter: Exactly what it sounds like: you try to make fire. It's one of those things that are horrifically boring and only marginally improved by the inclusion of punching, like gym class and long-term relationships.

Dino Vault: In a game with well-done controls, you would jump over the dinosaur. In Caveman Games, you fall in a pit.

Saber Race: These cats are fucking sick of being made a mockery of and have decided to run you down, slash you open, and spread your precious bodily fluids across three voting districts. Wait, no, that's just what I want to happen to the Internet.

Clubbing: IT'S PARTY TIME UP IN THIS BITCH.

Graphics: In terms of caveman video games, they look better than those of Big Nose, but then again dropping your TV screen in the La Brea Tar Pits would look better than Big Nose. I give them a solid -5/-10; they're 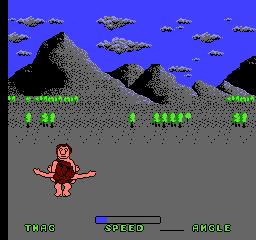 I have no idea how women were sexy before Pilates, shaving, and Cosmo magazine.mostly all right, with a few glaring oversights.

Fun: I want to give it points for sheer lunacy on the grounds that who would want to pole vault with an ape man? Living, breathing Neanderthals may be the chief gamer demographic today, but in years of yore gaming was the forte of EXTREME, BADASS DUDES WHO GOT CHICKS and Moms and Dads had a lot of money. Smelly people in furs who poke at their various orifices with flint tools are not extreme, but in fact really, really boring, much like this entire experience.


Defining moment: Caveman Games has a Token Girl character, Crudla. While this alone made it progressive ahead of its time, the Caveman Games team should be commended for their portrayal of a loving, homosexual relationship. They should also be beaten within an inch of their lives for being lazy fucks.