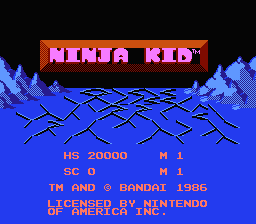 At a Glance: And God parted the 8-bit blipping squares that were supposed to signify water, and uttered, "Lo, let there be shitty games involving ninjas."

And Richard Dawkins was pleased.

Okay actually I have nothing to add to this joke but I have to keep typing because the program which we use to write articles was last rewritten in 2001 and makes the layout look like broiled ass unless I put in a bunch of useless filler text. I understand that this has disrupted your Humor Enjoyment Process, but if Kevin "Tech Support" Bowen couldn't fix it, who could? 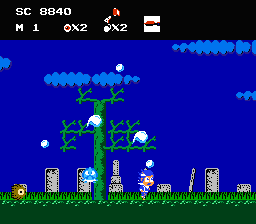 I hope you like bullshit! Story: The only thing that could make another generic ninja game worse is... another generic ninja game based on Anime!! Then again, the huge number of ninja-related Animes may have something to do with ninjas being perfect wish-fulfillment fantasies -which, sorry guys, is essentially what Anime is! I don't think it's a bad thing, especially because Japanese men are expected to be robots for their entire lives. Not awesome Gundam robots with lasers, but thankless, soulless robots that are automated to pick up runny dog feces 96 hours per week and whose robot children grow up hating them because of their absence. And even I have to admit being a ninja in feudal Japan would be pretty sweet. I'd have shurikens, get to do awesome karate, and no one would fuck with me ever!

Just kidding, of course! I would most probably be dead from tetanus.

Gameplay: You do get the cool shurikens in Ninja Kid, but unfortunately the pain is also forthcoming. Your 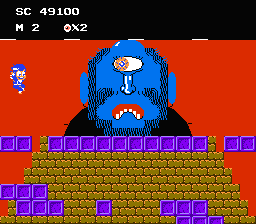 unlimited supply of projectiles is countered by the fact that everyone else already knows this trick, and being touched by any one of their little pixels of doom spells instant death. So it's basically about as easy to survive Ninja Kid as surviving driving a railroad spike through your forehead, although I don't recommend trying the former.

There's some sort of world map with levels on it, and each level has a clearly sense-making theme, such as "Guerilla Warfare," in which you fight ghosts on magical green blocks floating above poorly-drawn corn. Seeing as all modes of attack feature projcetiles, the levels redefine "clusterfuck." This keeps up until the Gods of Bullshit tire of toying with you and you're magically released from your torture. As far as I can tell the game consists entirely of pressing B to kill, but this Gamefaqs.com review suggests something more meaningful:

"Holding down + A will drop Ninja Kid below a platform and during Shangri-La battles, holding down near the edge of the screen will summon your friends, if you have flutes."

Hear that, kids? That's why you have no friends! Lack of flutes.

Graphics: The most offensive thing about this 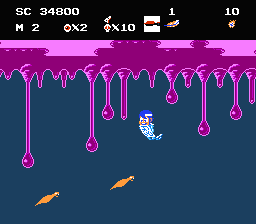 needs more dongs. game's graphics is the shit-eating grin on the protagonist's face. What the hell does he have to be happy about? Barely-detailed levels that manage to be both seizure-inducing and boring as freeze-dried silt? Icons that are either bland or terrifying? Flashing graphics as exciting as the MS Paint bucket tool they were created with? Man, the one-hit kill system may mean that your Ninja Kid wil dies again and again, but at least wiping that insipid smirk off of his face is sort of satisfying.

Enemies: There are a lot of enemies, per capita, in this game. Puckered tumors roll across the floor, fat bald men zoom around in their hoverounds, and just about everyone is trying to puncture your ass by chucking whatever's handy. The levels might scroll as you move, but they sure as hell feel cramped when all of the excessive platforms are stuffed with zipping, murderous blobs lobbing constant death in your direction. Put it all together and this game truly redefines "clusterfuck." Actually, the fuck isn't even really clustered; it spews everywhere, expanding grotesquely and uncontrollably like that cyst in your intestinal wall that you refused to get checked out because you were too busy with your Call of Duty 4 tournament.

Fun: Ninja Kid would be an innocent way for a child of the 80s to kill a few brain cells if it weren't so stupidly hard. It's not exactly easy to advance through at least 20 levels of flying penises when you start with two lives, 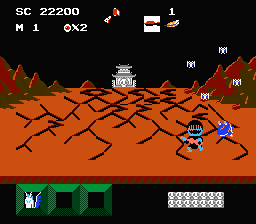 GARBAGE DAY CROSSOVER???die in one hit, and are constantly being pelted with more rocks than Chad Kroeger at a heavy metal concert. You know, not too long ago I'd have said that it was stupid to market these impossible games to little kids, but now I actually think that they're MORE likely to subject themselves to this sort of "challenge" than adults. Children are our shining jewels of the future, but -as someone who has had a knife pulled on her for suggesting a small child go to bed at 9 pm- they are also insufferably retarded. Seriously, when was the last time you saw a child on the board of directors for a major corporation?

Defining Moment: The Shangri La levels appear at the end of each world. It takes the game's basic premise of a clusterfuck and compounds upon it with retardation, with happy musical notes, a health meter, and God knows what else. Jesus Christ, I have like four papers to write and I wasted time playing this? Where the hell is that railroad spike?