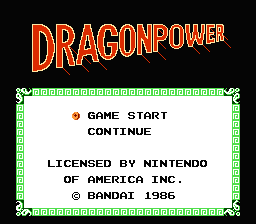 At a Glance: It's called "Dragon Power," but any fool with even secondary experience as a social reject can spot Dragon Ball from a mile away. So this is a trip down memory lane for me, as I, too, was once convinced I could go Super Sayin' and impale bullies with my obscenely spiky hair. These were dark days for me, but I got better though once I reached that special age when one stops obsessing about magical flying clouds and starts obsessing about fucking. However, if you like Dragon Ball Z and are over the age of 12, rest assured that there is help for you in the form of chemical castration.

Know a terrible ROM? E-mail me!

At least we're being treated to some fantastic animation!Story: Back in '86, we were still strong in our battle of keeping retardation out of these Great Untied States of America. Thus, it was decided that most references to Dragon Ball in Dragon Power would be removed. Unfortunately, this resulted in something sane people have long thought impossible: the plot became even stupider. Without glorious anime background knowledge, one wonders: Why does the little boy have a tail? What happened to my balls? Why does the creepy old man want the prepubescent girl's "sandwich"? At least the horrible translation is comical -or at least it would be, if not for the unbearably slow creep of the dialogue. I know I can't think of a better gameplay experience than watching one letter appear per goddamn second!! Honestly, the amount of time wasted watching that garbage could be better spent, I dunno, writing SWAT Kats fanfiction.

Gameplay: A shining beacon of originality where you run around and punch stuff that wants to kill you, consisting of "everything" and "its mother!" However, the makers of this game wanted to inject a bit of sunshine into your life, so they fixed it so your health meter is constantly ticking downward, even when you aren't being attacked by pterodons with prolapsed rectums. To make matters worse, -and of course it gets worse!- you're pretty much entirely limited to punching and jumping. In order to kill something, you have to do more grinding up against it than a drunk frat boy on his sister, and it will smack the shit out of you the whole time. In the end, the entire game becomes tentatively sneaking up on mutants and poking them politely. 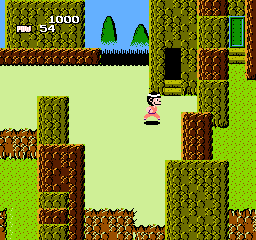 God I love nature. This is why I'm currently sitting inside writing captions for screenshots of horrible video games.Thus, you're 100% dependent on little power ups that may or may not drop when you mash your fists into ugly sprites. What you'll be itching for is health, health, and health, but what you'll get is useless weapons, useless power-ups, and useless little numbers there to mock you. Remember, kids: A game isn't challenging unless it causes you to repeatedly fail through no fault of your own!!

Graphics: Even though I hate this game more than Ron Paul hates desecrating our glorious constitution, I shouldn't complain too much about graphics from 1986. They're okay for the time period, aside from the relative lack of diversity in the sprites and the fact that the power-up which makes Goku run super-fast looks suspiciously like a pile of blow. But all is forgiven because hilarious anime sausagefaces never get old!!

Fun: I am convinced this game intentionally tries to make you miserable. Your ways of defending yourself are 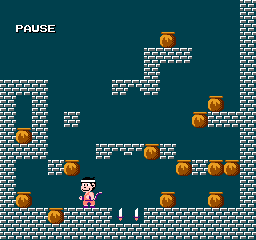 Sorry but there's not enough pot in the universe to make this shit enjoyable. Try the knives.already extremely limited, but in between doing Dragon Blow off of Mr. Popo's ass, the executives decided that your health should constantly tick away on its own. It's like 12-year-old Goku's finally realized how fucking insipid his entire deathless franchise will become and has slit his wrists, fighting evil while bleeding out and sobbing uncontrollably. Except it's not really like that, because that would be an anime that's enjoyable to watch, and if something like that were to exist the reality we all know and love would implode and crush us in a gorey glob of shame.

Defining Moment: You have to find "Pudgy," a shape-shifting "child" that looks suspiciously like pork. who enjoys hiding in houses throughout a village from Stanley Kubrik's 8-bit wet dream. In each house there's a faceless legion of creepy misogyny mummies that you have to pummel in the face until a tentacle fetus appears and schools you. Occasionally, Pudgy's decapitated head will pop out instead, and you have approximately .004 seconds to hit him before wobbles back to whatever nightmare he originated from. You have to do this a lot before he gives up, and thanks to the shitty fighting system in Dragon Power, you take loads of damage while fighting the bad guys that usually come out instead. Oh, did I mention they never drop health? Ever? I don't remember how I ended up beating that level, and hopefully I will soon be unable to remember my entire Dragon Power experience. Power up!!