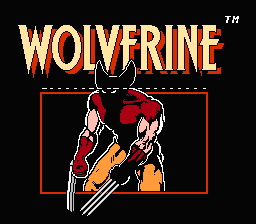 At A Glance: I'm going to make a confession to the readers of Something Awful: My nerd cred does not extend so far that I am overly familiar with the X-Men franchise. Sure, I used to join the other kids in playing X-Men on the playground, but it usually degenerated into all of the little girls arguing over who got to be "Storm," while the boys told us that "Mystique" is way, way cooler, although they tended to leave out the part about her being a skank. Nevertheless, I know a bad game when I play one, and Wolverine makes me want to insert Adamantium Claw A into Eye Socket B.

Story: Welp, it involves X-Men and... that's a good question. According to a crack team of sunshine-fearing experts, the "plot" doesn't even make sense within the context of comic-book land. Basically, your arch-nemesis "Sabrertooth" sends you through a montage of ludicrously goofy "trials," which you, El Wolverine, tolerate because... Surprise! You are never given any logical reason for pursuing President Chester A. Arthur through the various themed areas of Walt Disney World, other than being the recipient of some 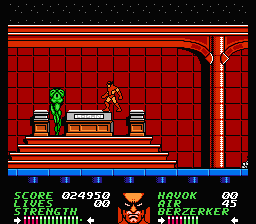 Well I don't know about you, but my trousers are soaked! With hate.moderately inflammatory remarks! Or maybe Sabretooth stole your favorite Hawthorne Heights album, because this game transforms everyone's favorite bizarro-Shredder into a self-mutilating, binge-eating pussy.

Gameplay: When you think "Wolverine," I sure hope you think "startling intellect" or "dashing good looks," because you're not going to be using those claws very much. Instead, your default method of attack in Wolverine is prissy little punches and kicks that do low damage and have a comically short range. It's possible to unsheathe your claws by pressing the SELECT button (remember when games still used the SELECT button?), but the developers threw in a nice little bonus whenever you dare to use a goddamn character trademark: You damage yourself. Yes sir, good old Wolvie, the fabled X-Guy legendary for his self-healing powers and manly stubble, dies a little bit inside every time he swings his fanboyium-enhanced fists, whether or not he actually connects with something. Immediately I began to search for ways to replenish my health, and found that the only things that make Wolvie feel better are apparently burgers and alcohol.

Because it's hard to do any damage without killing yourself, what should be a slash-and-dash game becomes an 8-bit version of keep-away, with our buddy Logan leaping and dodging his way around uninspired terrain, such as the sky level, the water level, and the West Side Story level. Despite its lackluster level design, it is still very, very difficult to stay alive in Wolverine, because the game neglects to give you that time-honored second of invulnerability after you take damage. Every time you even think about making contact with one of the game's 492,084,324,242 obstacles, your health goes down faster than Kevin "Fragmaster" Bowen on Sonic the Hedgehog.

Graphics: Wolverine was made in 1991, late in the life of the original Nintendo Entertainment System. 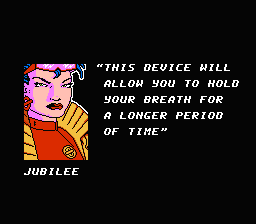 Wait a minute, you're not a "man" at all! GET OUT. Considering this, the graphics aren't bad, but they're certainly not good, either, especially when compared to the vivid palettes of Super Mario Bros. 3 or Dragon Quest IV. The animation is quite fluid, but Wolverine himself always seems too small for the screen, buzzing about like a tiny, self-loathing gnat. And why the hell did they find it utterly impossible to get his costume the right color?

Enemies: For the first few levels, every baddie seemed to be a featureless white blob reminiscent of the stock villains from Mighty Morphin' Power Rangers with vitiligo. While the sprites eventually change, it's pretty much the same villain over and over again: some douchebag as tall as you are that fires stupid projectiles. Everyone and their evil world-dominating grandmother gets projectiles in this game, except, of course, for you and your Fists O' Suck. It's pretty damn aggravating, but at least they all fire their bullets/shurikens/ping-pong balls directly over your head, which means you can always crawl forward and punch them in the crotch. I guess there's just something about horrible video games and genital mutilation!

Enemies that aren't projectile-spewers are few and are between, but those that exist are high in their what-the-Christ factor. Whether it's zombie Cyclops on steroids or underwater bubbles that give you bitter death instead of sweet, sweet oxygen, Wolverine always had me double-checking to make sure someone hadn't accidentally forgotten their spare tab of acid on my eyeball. 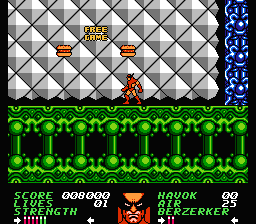 Welp, at least you get what you pay for.

Fun: There is nothing fun about being a mutant who can't cut a bitch up. But possibly even worse than that is the elimination of the crucial quasi-second of invulnerability after taking damage. See, the levels may be as boring as your sex life, but the makers attempted to put in traps to "spice things up." This is only slightly irritating at first, but when they try to make things "more challenging" later, your health is pretty much constantly shooting down. Accidentally brushing against an enemy will have the same effect, but then again, so will killing it quickly, because claws damage you too! Thus, Wolverine fails at being both a slasher and a survival game, preferring to corner the "endless symphony of death" market. It doesn't help at all that the game's silly health-restoring items are rather rare. Then again, perhaps it does, as the amount of burgers 'n' booze needed to keep Wolverine alive would turn him into an obese, hamburger-vomiting alcoholic.

Defining Moment: WHERE I ACQUIRE MORE CLAW. Seriously, I can't imagine how disappointed little prepubescent fans of Wolvie must've been when they popped this game in their trusty Famicon5000. It's like buying a copy of Grand Theft Auto only to discover the game itself is a freakin' knitting simulator.