Judging by Belly Punishment, there's probably not too much money in this market. The weird tables, animated GIF "previews," and lilac background color do not make for the most engaging site. Nor does it make me want to give them my credit card number, but that's not much of a risk because I also don't want to see women getting their guts clobbered. I must admit, though, some of these video descriptions are pretty tempting. Maybe I'll pick up "Motel 6:"

I rented the cheapest motel room in the town, I stripped the bed of the blankets and stripped down to my panties and top. I could see every line in my stomach from the work out. It made me so hot, so ready, being so ready for the stomach punching I need, I so want, I so need. I set up the camcorder on the tripod and aimed it at the bed, I remember moments later the door opening and this shirtless man with this six pack abs enters. I took control and I told him how its going to be, making sure the video camera was focused how I liked it Not to show his Identity as we agreed in prior emails, he complied. He was sweating and hot, his body was on fire, his private was so big and showing rock hard thru his pants, I knew I wanted to #### him (but I wouldn't let him know it). He punched my stomach for hours, he played with me, making me orgasm dozens of times while beating on my belly as I flex, leave relaxed, etc..more punches then anyone can ever count, Hundreds of punches while he beat me, touched me, stripped me, made me serve him, he took me, all the way, through the opening of his boxer shorts and thru the side of my thin panties he had no problem. He punched me so hard while he was inside me I passed out on top of him. Jill Lauren Love you guys

Wait a second. This is supposed to be a fetish video, right? What the fuck kind of weird standards does this site have where they will host videos of naked women getting hit with baseball bats and jizzed on, but they won't publish the word "fuck" and they substitute the word "private" for genitals? Christ, they can't even make this sound erotic in the most basic ways. You know what? Fuck this puritanical bullshit. I'm gonna go watch some ladies wrestle each other completely naked and maybe they'll even say the word "pussy" sometimes, cuz goddammit this is the fucking USA. 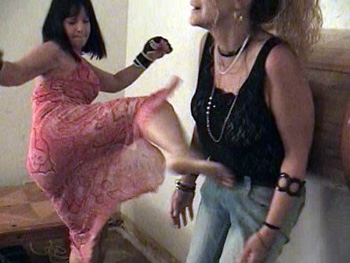 This house keeper did not listen, The laundry was not done. I sent the un conditioned soft belly old maid to the private room where I did more then punched, kicked, stomped the old weak lady in the stomach until I made my point. I even smacked her breast. The laundry needs to be done and I will not stand for lazy house maids to be paid and not work as expected. I was mean, very mean but this old house keeper was taking advantage, so I set her straight. This lady was in NO condition to take belly punches and she was weak, I did not go easy on her, not at all.