Defending The Indefensible: Miley Vs. ...

There are 12 tracks on Can't Be Tamed, the new album from Hannah Montana sweetheart Miley Cyrus. There are 11 tracks on Expo 86, the new album from Sub Pop indie supergroup Wolf Parade. So immediately, Ms. Cyrus scores more on the value-for-money stakes. Also, however much you might object to her chatty amiability and youthful fan-base, Ms. Cyrus has not inflicted nearly as much horrible music upon the world as the members of Wolf Parade have (the forgettable Sunset Rubdown, the dull-as-Oscars Handsome Furs, and Hot Hot Heat, for starters). So score two to the newly 'raunchy' teenager, and that's before we've even starting comparing the music. 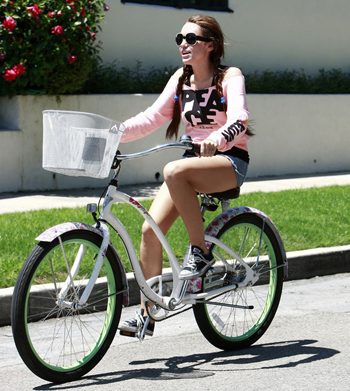 Miley trains for the fight, while her mentor Doc Louis follows on foot.

1) "Cloud Shadow On The Mountain" vs "Liberty Walk"
You need to work out for yourself which track is by which artist. (Think it's straightforward? You clearly still haven't seen the new Miley Cyrus video in which she's depicted as a giant caged bird struggling to break free from you, the viewing public ... so naming one of her songs 'Cloud Shadow On The Mountain' wouldn't be too great a stretch.) The first song on Expo 86 is a chirpy Canuck knees-up, with some sub-Philip Pullman imagery about gazelles, scorpions and harbours thrown in. It's like Sonic Youth so lite it's tasteless, or Arcade Fire crossbred quite unreasonably with The Pogues. Pitchfork has its jittery bears down as "paranoiac," but the only paranoia I can feel that's on offer is the fact folks might see right through it for its paucity of imagination. What Pitchfork thinks of 'Liberty Walk' is sadly not recorded -- clearly the new Miley Cyrus album is below serious consideration for these exalted potentates of taste.

So my first question to Pitchfork and all those who slavishly gather at its gates would be: Why? Why write about The Fame Monster and not Can't Be Tamed? Does pop only become worthy of serious consideration once it leaves the realms of the merely global and goes stellar? Sales are that important to you? If not, what's the cut-off point? Is it the amount of latex worn in any given video? Hey, give Ms. Cyrus a break, guys. She's only a teen!

Anyway, the Cyrus track is merely forgettable, not objectionable. So score three to the chick with the enormous black wings futilely beating against the cage of public expectation.

2) "Palm Road" vs "Who Owns My Heart"
"Who Owns My Heart" is a fine, upbeat, dance floor-filler -- not a zillion miles away from Britney or Gaga herself, and with that bloody vocoder effect all over her vocals so she sounds more like an all-dancing elevator than a human being -- but with lashings of '80s Eurobeat, and a good solid message. Who owns my heart? It's a question that cuts through the bullshit and confusion of being a teenager.

"Palm Road," on the other hand, is serious bearded rock made by serious young men with beards. There are plenty of the trembling voices we have Thom Yorke to hate for, and a squidgy synthesizer lifted straight off a Rick Wakeman record. Is this really worth more consideration than Miley Cyrus? Both are derivative, both are clichéd in their own respects, but only one can you dance and make out to.

3) "What Did My Lover Say?" vs "Can't Be Tamed"
Now the dude from Wolf Parade wants to be David Bowie, like every other fucking indie boy of the past three decades. Isn't it time we moved on? There's that, and the fact some wanker stuck in Middle America and signed to Sub Pop Records thought it was cool to admit to a love for Bruce Springsteen. Listen. Bruce does Bruce well. He gets away with it, because he's Bruce. You're not Bruce, and though I understand well your desire to have your band's name inscribed upon lighters and waved in the air, you never will be. So give it up now. Having said all that, though, "What Did My Lover Say?" is, in its own way, as straightforward and predictable and pop as Miley Cyrus.

Speaking of which, Miley is on fine form here. The title track is your standard "oh, I'm getting older, please don't change me, please don't cage me, please don't treat me as another piece of meat" coming-of-age plea that every Disney-reared artist has to record, as part of the transition to 'serious' artist -- but it's still a corker. And it's only a short ride from here to singing about being battered by your boyfriend.

4) "Little Golden Age" vs "Every Rose Has Its Thorn"
Wolf Parade cheated by bringing in Modest Mouse to play on their fourth track. Hey! This isn't tag wrestling! (I assume it's Modest Mouse, leastways.) Still, it gives them the edge past the first howler from Miley. "Every Rose Has Its Thorn," perhaps a nod to her Hannah Montana past with its slow-paced beats and American Idol-ised-to-fuck chorus, is clearly a cast-off b-side of her dad's that deserved to remain whimpering and beaten on the kennel floor. 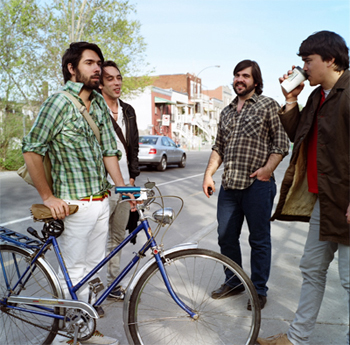 Wolf Parade will get around to training, you know, whenever.

5) "In The Direction Of The Moon" vs "Two More Lonely People"
OK, my next question to Pitchfork and all its apologists is: Why would you consider Pet Shop Boys or Saint Etienne worthy of being reviewed, and not Miley Cyrus? It can't just be down to David Lee Roth's famous statement about music journalists, "Rock music critics like Elvis Costello because rock music critics look like Elvis Costello", can it? It can't really be that old chestnut that pop = female = disposable, whereas rock = male = serious, can it?

"Two More Lonely People" is a cracking good track, as good as anything that's turned up trumps on that curiously continental anomaly, the Eurovision Song Contest, or indeed by Black Box, or indeed by ABBA (also not worthy of review on Pitchfork). There's a killer acoustic guitar motif, too. "In The Direction Of The Moon," meanwhile, is more serious young boys leaving their guitars to linger in the windy outdoors, and stand around blustering about how pop music's never been the same since the Thin White Duke retired.

6) "Ghost Pressure" vs "Forgiveness And Love"
There's a beautiful New Order/Ultravox synthesizer at the start of the Wolf Parade track that had me thinking I was listening to Miley's album for a moment, until the vocals started with all their "oh-oh"-ing and "Why you do this mystery" portentous stuff and ruined it all once more. Still, it's not a bad effort at all.

Miley, meanwhile, is totally in her groove on "Forgiveness And Love," emoting and wassailing and emoting some more. (Did I mention that she emotes on this song?) I reckon she could front The Flaming Lips easy, singing this song ... I can just see the giant hamster balls and bubble machines now. Give it a little backward guitar, and we'd be in total psychedelic heaven.

8) "Two Men In New Tuxedos" vs "Scars"
We'll skip straight past the next Cyrus track -- a 'tear-jerker' that reminds me of how, when we were kids, my brothers and I would howl 'MUSH' at the remotest sniff of a man and woman kissing on TV -- and go straight on to "Scars." Once again, Miley is heading straight for the emotion jugular, direct and nonetheless lovable for it.

9) "Oh You, Old Thing" vs "Take Me Along"
Note the "ironic" placement of a comma in the Wolf Parade song title. Now wince. Still, that John Foxx synthesizer is back, and I'm willing to forgive most everything for that. "Oh You, Old Thing" is a great two-minute pop song, even if it is played out over five. One up to Wolf Parade anyway, as "Take Me Along" is (whisper it) album filler. You'd have thought iTunes would have done away with the very concept. 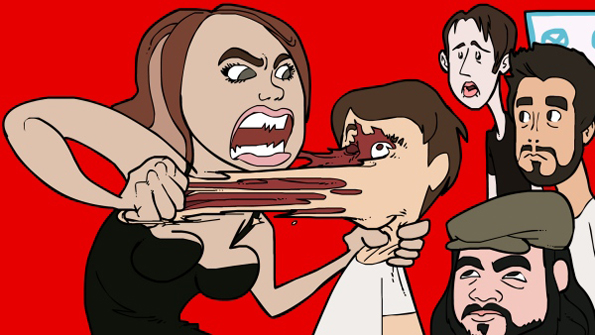 11) "Cave-o-sapien" vs "My Heart Beats For Love"
"Cave-o-sapien" rocks out like Deerhoof rocks out, all sudden time signature changes to let us know just how smart the musicians are. OK, I get it. You're smart. Despite this -- or maybe because of this, who knows? -- "'Cave-o-sapien" is probably the most memorable track on Expo 86, because at least it possesses a pounding, pulsating rock heart. The build-up of feedback works nicely, too.

The final song on Miley's album is ... um ... ah ... fuck it. I've always hated the weepies on pop albums, even Spice Girls albums.

Everett True writes about the other, non-Miley artists he enjoys at this site. Thanks to Shmorky for the illustration!