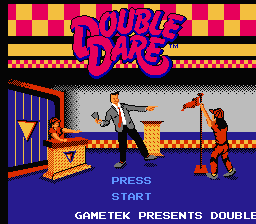 At a Glance: Unless your parents didn't love you enough to buy you cable, chances are you'll recall Double Dare, a surreally embarrassing game show for kids that helped catapult Nickelodeon into stardom. At the height of its popularity, there was a gooey green flood of Double Dare merchandise, from pajamas to pinball machines, so it should come as no surprise that a video game was also produced. Or maybe it should, as no matter how dear Double Dare may be in the heart of many an 80s manchild, it does not translate well into 8-bit format. No, seriously, there hasn't been a worse idea for a video game since Fred Phelps's Gay Bar Partytime.

Story: Just like the show!! Except the last time I personally watched Double Dare I was about four years old, 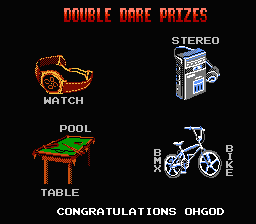 There is no sweeter victory than staring at a screen and being told I have won "WATCH."and was more interested in foraging for my own nasal deposits than the intricacies of the Talking Affection Substitute Box. A bit of internet research helped refresh my memory. At its core, Double Dare was a quiz show wherein kids answered questions for HUGE DOUBLE DIGIT PRIZES. Interspersed with these questions was the "Dare" mechanic, with which you could attempt to force the other team to answer your question. If they got it right, they received twice the money you would have, but if they got it WRONG, that money went to you! If they were pussies, they could bounce the question back to YOU for FOUR WHOLE TIMES the money, and if you refused, then it was time to bust out a "Physical Challenge."

The Physical Challenges I do remember, because they were what made Double Dare cool. While technically challenges that also happened to be physical, the main selling point was that they got kids (and sometimes -gasp!- grown ups!) to engage in humiliating acts, usually involving miscellaneous food products and the contestants' last shreds of dignity. At the time, the "zany" ideas the show's writers came up with always seemed totally awesome, but looking back from a post-puberty world, it seems they just slightly lacked inspiration.

Gameplay: Much like Wolverine, however, Double Dare makes you suffer to "enjoy" the main pull of the franchise. I'd say about 90% of the game is answering question and after question within a time limit. Because Double Dare is based on a kids' show, the questions are generally pretty easy, with a few hilarious examples of things no kid would ever know, ever. Of course, maybe Native American languages were taught in public schools back in the 80s, who knows! The difficulty level only seems to have a minor effect on how hard the questions are, but there is a ridiculous difference in the AI's intelligence. On "Medium," the creepy pixelated children won't know what the largest continent is to the point of double-daring you, but on "Hard" they have apparently memorized the Life and Times of Joan Rivers.

But while the bulk of the game is merely boring, that which is truly bad is bad enough to make you bludgeon

"Viper" have futures as Something Awful Forums Novelty Emoticons #392840 and #392841.yourself with the conveniently-sharp corners of an NES controller. Every last mini-game, whether it's bowling with cantaloupes or feeding a cardboard monkey, is a matter of stopping these little SPEED and ANGLE bars in the right place. Yup, there are ten to twenty "unique" mini-games, and they are all played in exactly the same manner. The angle bar didn't give me much trouble, but the SPEED bar is as unreliable as your penis during heterosexual intercourse. Sometimes it worked! Sometimes it didn't! Maybe I should sacrifice more monkey-toast to the Wacky God! Even worse, you usually have to stop the bar at EXACTLY the right place for it to work. I don't know about you, but I don't think my egg golfing should require the same precision as brain surgery.

There is also a two-player feature to Double Dare, so you can play with a friend! But I wouldn't, unless of course you think you have a friend surplus.

Graphics: Normally, I cut these games some slack in th Graphics department, as I know they're old and graphics didn't get totally sweet until the PS1 era. But I will afford no mercy to Double Dare, as it showed me none when I looked into the unfeeling squint of its host. There is a lack of effort so stunning that it loops around to being almost impressive, albeit for all the wrong reasons. All of the sprites for the "action" sequences are exactly the same, no matter which of the creepy children you selected at the beginning. Then again, their more "detailed" sprites, used in the quiz section, are clones anyway, the same orange little brat with a revolving array of scribbled hairstyles. The only imaginative aspect of the contestants is that they all have Fetal Alcohol Syndrome, and Marc Summers himself looks like a digital victim of plastic surgery gone horribly wrong. 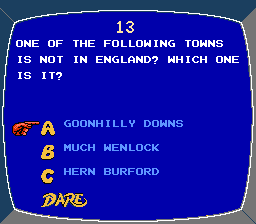 You don't sound too sure yourself, there.Sound: I'd like to say that this is the one area the game manages to shine in, but alas, Double Dare's sound is about as shiny as a Briton's teeth. I swear to god there are like five sound effects in the whole thing, all of them stale blips and buzzers. At first I was annoyed by this, but that was before I got to the mini-games. There is "music" during the physical challenge sequences, but it is of the kind that inspires fantasies of watching the programmers slide on their bellies through shrapnel for "fabulous prizes," by which I mean tetanus. So yes, you know a game's sound leaves just a bit to be desired when your favorite part of it is the part where it isn't there.

Fun: Forgive me while I rant here, but It's almost unfair to give this game a "fun" rating. You see, Sword of Sodan might have been fun if not for the shitty controls and the impossible levels. Wolverine might have been fun if the titular character had actually been able to behave like a vicious member of the weasel family. The creators of those games at least had fun as a goal, albeit one at the end of an apparently impossible-to-traverse tunnel. But Double Dare wasn't even trying; they had a brand name to sell, and whether or not it was more pleasurable than trench warfare was of little consequence.

Back in the day, it was always fun to watch what idiot task Marc Summers would command his child-slaves to undertake in pursuit of sweet, sweet Alex Hamiltons. We, children of the era, reveled in the excitement, glued to our seats as we watched the pain, the fear, the joy. Unfortunately, emotions beyond "1000101101001010110010" are not aptly portrayed by little faceless boogers jerking around on the screen, thus eliminating what little merit a show about chewing your way through food coloring had.

As bad as the mini-games were, at least it would have been more interesting had there been a menu that allowed you to play them whenever you wanted, because the game's computer almost never actually "Double Dares" you; ninety nine times out of a hundred, you will only play two 30-second games per 50-or-so questions, and those two are automatically triggered. But the game designers neglected to put that option on in, 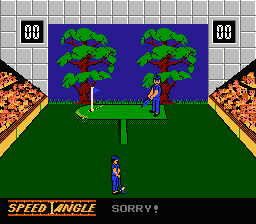 Me too! as what could be more fun for little Joanie and Johnny than a game consisting entirely of this?!

It tickles me pink to think that at one point in entertainment history, Marc Summers had some Christ-like selling power. But obviously he did, because there is literally nothing fun about Nintendo's Double Dare. Not even a little bit. I really mean this. Absolutely nothing.

Defining Moment: The gorilla mini game, wherein you have to throw bananas into a giant animatronic gorilla's moving hands. No matter what I did with those god-awful angle and speed bars, it either bounced off the ceiling or fell just short of his hand. Maybe if I stopped the bar a few thousandths of a millimeter to the left I could have prevailed, but I have more pressing issues, like the disembodied 8-bit head of Marc Summers haunting my nightmares.