As a special treat to coincide with the release of X-Men: First Class, we've decided to cast an eye over every X-Men film to date. Joseph "Jay Dub" Wade takes a look at the works of Bryan Singer in X-Men and X2: X-Men United, Martin R. "Vargo" Schneider basks in the glory of X-Men: The Last Stand and the infamous X-Men Origins: Wolverine. But, before all that, Ian "ProfessorClumsy" Maddison is going to weigh in on the latest installment.

EXPECTATIONS: I am sick to death of super-heroes. Every other film released lately is either a super-hero film or a sequel to a super-hero film. And if there's one thing worse than super-heroes, it's super-teams. The problem I have with super-teams is that there has to be a central focus, so the more naturally interesting characters get pushed to the front of the action while the rest of the team gets relegated to worthless background roles. The Avengers, for example, is going to be an ordeal. The early X-Men films did a decent job of avoiding this by not flooding the screen with powerful heroes, but these franchise films are all about escalation, so you just know that's out the window here.

REALITY: I found X-Men: First Class to be a rather unsatisfying experience. It's not as terrible as I was expecting, though. In fact, I would go so far as to say there are moments of great promise peppered throughout. But, there's just too much of that "super-team" weakness, not to mention a dull climax and a few too many superfluous characters. 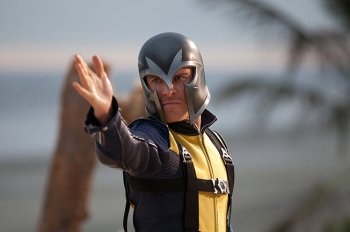 How many times have I told you? DO NOT LEAVE ME HANGING!This film starts with an almost identical recreation of the opening scene from X-Men, with a young Erik Lensherr being separated from his parents at a Nazi death camp and awakening his immense power by bending the steel gate. This continues, however, with Erik brought before Klaus Schmidt (Kevin Bacon), a crazed scientist who wants to use the young lad's powers for his own ends. Years later, Erik grows up to be a vengeful, scene-stealing Michael Fassbender, systematically finding and killing all the people who wronged him, with Schmidt his final target.

Meanwhile, Charles Xavier (James McAvoy) has just been made professor of genetic something-or-other at Oxford University when he is approached by CIA agent Moira MacTaggert (Rose Byrne) to help track down a group of super-powered bad-guys led, of course, by Sebastian Shaw who, surprisingly, is Klaus Schmidt, now younger and more American. Seems Shaw has the power to "absorb energy," which makes him forever-young, indestructible and incredibly destructive. Xavier forms a new mutant division for the CIA and sets about recruiting all the super-people he can find, including Erik Lensherr, in order to stop Shaw's plans to start World War III and bring about the destruction of mankind, leaving the mutants to take over.

It's definitely a sprawling plot, with some interesting characters. Lensherr and Shaw share a lot of ideological views, but Lensherr's quest for vengeance is more important to him than that. His relationship with Xavier is a strained one: They are friends, but they have different ideas on how to do things, leading to a difficult rift. Their relationship reminded me, in a lot of ways, of Ken Loach's The Wind that Shakes the Barley, about two brothers who spearhead the Irish revolution, only to end up on opposite sides when their ultimate goals turn out differently. Here, Lensherr's revolutionary tendencies do not paint him as a typical super-villain (at least, not until the film's final, disappointing moments when he becomes Magneto), but instead as a man fighting for something in which he adamantly believes. I'm glad the film didn't pull any punches in this regard and dares to have characters choose sides based on what they believe, rather than melodramatic back-stories that lead to cartoon villainy.

Setting the film in the historical context of the Cold War (with remnants of the Nazi War Machine looming heavily) also makes for some interesting explorations. The idea that the next stage of human evolution would come at a critical time of conflict, giving certain individuals the power to change everything for better or worse, only to have them be torn apart by a conflict of their own, is a damned interesting one. This is the first time I have seen a super-hero film of this type that is shrouded in ambiguity. These fireside chats about political ideals, set in a time where revolution is imminent, are not as one-sided or deliberately left-leaning as you may expect from a Hollywood film. Instead, we're allowed to hear the merits of both sides, no longer good or bad but two different ideas of what is just and right. I found myself agreeing more with Lensherr than Xavier, ultimately, just as I agreed with Cillian Murphy's character in The Wind that Shakes the Barley. I wouldn't mind seeing what they could do with an X-Men sequel that portrays Lensherr's revolution as successful and subsequently explores the relationship between these two men in that context, but that probably won't happen.

The problem is that Lensherr, Xavier and Shaw are really the only characters in this who are worth watching. Every other X-Man (or X-Person) is just some boring kid with a ridiculous power who is only there to justify having a plural in the title. Sure, the blue kids turn up in the other films, but their presence here offers nothing. We have Hank McCoy (Nicholas Hoult), a scientific genius with weird feet who, for some bizarre reason, has a whole Jeckyll and Hyde-inspired sub-plot about developing a cure for his weird feet that ends up turning him into a hairy, blue Kelsey Grammar (along with some of the worst make-up design in recent memory). Then we have Raven/Mystique (Jennifer Lawrence), who can transform at will and spends the entire film wrestling with her identity, only to serve absolutely no purpose whatsoever beyond appearing in the other films. These two nobodies are a symptom of rampant "prequel syndrome," which gives film-makers a desperate need to show us the pointless minutiae of every major character's origin, even when they serve no purpose to the film at hand. 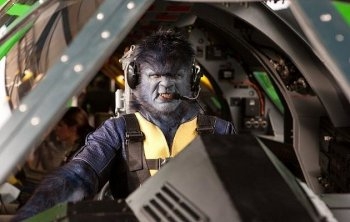 The Wolfman came out last year and this is the shit you're giving us for Beast? Seriously, it looks like a cross-eyed finger puppet.The new characters are even more worthless. Banshee, Darwin, Havoc, Angel... these are all characters who appear in this film simply because there is a pool of X-Men from which the screen-writers must pluck their supporting cast. These characters haven't been in any of the films yet, so the filmmakers cram them in here to make it seem like this super-team is a little bit more impressive than it might otherwise appear.

And that leads me to another problem I have with this film. You know how the protagonists in super-hero stories always have to face insurmountable odds in order to succeed in the end? Well, here the protagonists outnumber the antagonists 2:1, which hardly makes the situation seem particularly threatening. Sure, they're mostly kids, but they also have ridiculous super-powers. For example: One kid can produce incredibly powerful magic hula hoops that immolate everything they come into contact with. It makes the climactic confrontation very uninteresting when the bad guys are out-manned and outgunned at every turn.

It is my understanding that this started out as a Magneto-centric prequel and it certainly shows; every moment Fassbender is on screen is very compelling. But as soon as we start venturing out of character-driven storytelling and into super-team territory, everything just feels floppy and pointless There's a good film in here trying to get out, but it's powerless to escape the shadow of franchise-driven cinema. If they weren't trying so hard to mould this into a successful new X-Men film for the twelve-year-old boys, they could have slowed down and realised that this is a film with a lot to say for itself and it does have worthwhile, revolutionary ideas. It just can't get its voice heard over the din of tacked-on silliness. Less would most definitely have been more in this case, but there's certainly a lot to like, and it's nowhere near as messy as Thor.

MINORITY REPORT: I really hope that someday someone makes an movie that's nothing but Charles and Erik talking about ethics to each other. It'd be like Mindwalk, except one them can't actually walk. - Martin R. "Vargo" Schneider