At a Glance: Have you been picking up the paper lately? Something crazy's going down in Metrop-I mean Supermantown. I mean Not Metropolis. Antitopolis. No Supietopolis. Megaro? Metro City! That's it, Metro City. Check it out.

Got a suggestion? Email me 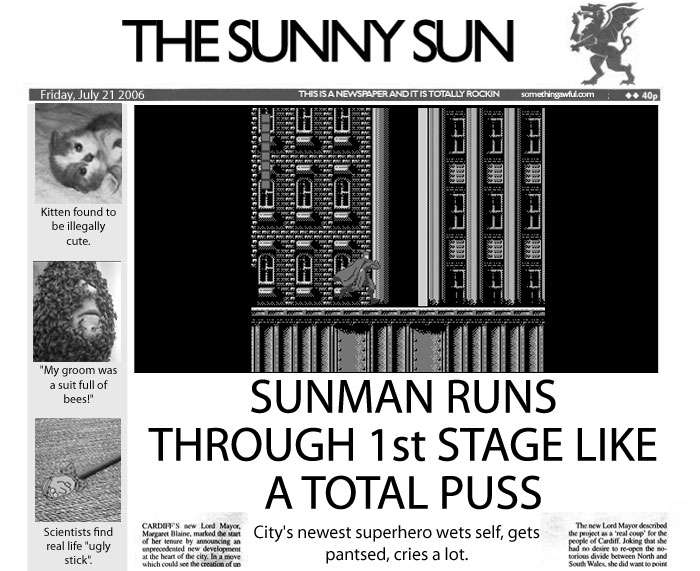 For the past few months our city has been under constant attacks by flying batmen, pinchy robots, and erotically pumping crystals. Our sources say that it is all a part of a fiendish plot by the quite a bit more fiendish villain known as "Specter". What does he want? Specter has not listed any demands at all, sending no word to our city's government or police offices. But our internet sources say that he just sits and stares at a globe all the time. Is he plotting to ruin our good city?

Have no fear, dear reader, because our city is about to be saved! Out of the poison mists (you know, the thing that keeps the fascist military out) arrives a new champion to aid us against the villilicious ways of Specter, and his name - Sunman! His arrival is mysterious, somehow occurring right after we sent a message for Superman. No worries, citizens, he must be more powerful than Superman for him to get here first! Everyone wants to know, where does this mysterious stranger hail from?

The next most popular question on our online poll on home-and-bongs.com/sunnysun is if Sunman could be Tonka tough enough to deal with the type of enemies he will face. Well, is he? Our magic eight ball sources say no, as reporters watched Sunman run around screaming bloody murder during their first encounter. Another eye witness report stated that he "made a sad face with a single tear when touched one of those bad guys." Was Sunman abused as a child? Our sources say maybe. With such a fragile and sensitive body, what weapons is Sunman going to use to hurt these creatures?

"I saw him punching something and flying really badly." Said a citizen with one eyeball. "It was like he had no idea he could do it. He kept slamming into things. Oh, and he shot lasers once. But he didn't ever seem to use them again which I thought was we-" then he suddenly got hit by a bus for some strange reason. A bus with "Sunny Sun News" on the side. And I was driving it. Our bus. We killed him. 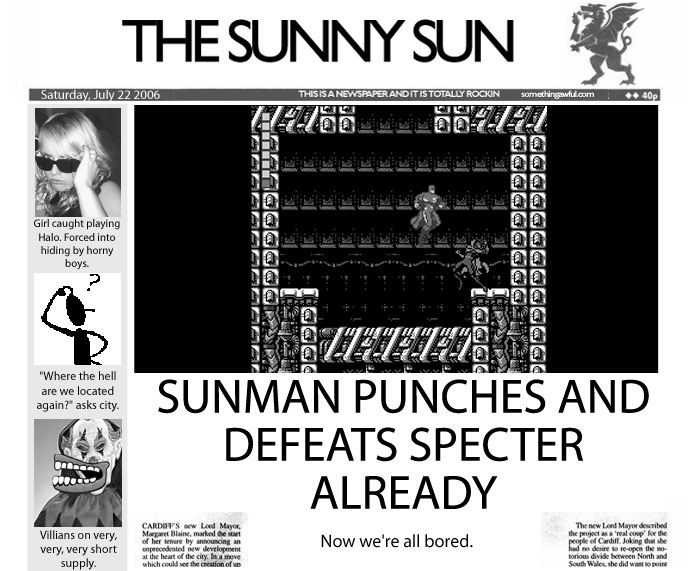 It has only been two days and Sunman has already defeated Specter, a feat even his mother didn't think he could pull off according to our voyeur sources in her closet. What allowed this new stranger to pull off a feat that no one else could? "Part of the reason was no one else tried ," explained local expert Eddie Fastypunch, "And you have to take note of how Sunman operates. Sunman did what a lot of people could never do: punched stuff. And Specter stands as the polar opposite of someone who punches: someone who moves. This proved to be a difficult fight, but once Specter stopped dodging it was all over."

But Specter was not the only challenge our new hero overcame in such a very, very, five or so level period of time. Our joke convenience sources have told us that every time Sunman appeared, he ended up fighting something large, manly, and pretty bossin', like a helicopter or a rocket. Taking his precious time or being a completely weak ratbaby that could barely open his jar of mayonnaise in the morning, these fights took a very long time. Does Sunman secretly hate men? Our sources say he only hates crime and himself.

Questions still abound about this new stranger from the stars or someplace. Where does he get his powers? Where does he shoot those lasers from? How can a hero who can stop a train with his bare hands not be able to take being touched? Our sources say these questions will be answered in the next possible never, because no one really cares.