Our heads are all spinning this week after the onslaught of incredibly mediocre films we've had to deal with. There is only one real exception in the form of Her, which gets by on the power of sincerity.

EXPECTATIONS: I'm not the biggest fan of Will Ferrell, the man who has come to define "trying too hard." That said, as a journalist, I've always had a huge soft spot for Anchorman and, because this is a sequel no one asked for or expected, I hope Anchorman 2 will live up to the original.

REALITY: Here's how you fuck up a joke: Give Ron Burgundy (Will Ferrell), the face of white male privilege, a seat at his black girlfriend's family dinner and allow him to talk the way he thinks all black people talk. That part's funny - squirmy, but funny. And his girlfriend, Linda Jackson (Meagan Good), the rare black woman in a position of power as a television executive in 1980, has every right to be incensed by his behavior - and she is. On the cab ride home, she berates him for referring to her relatives as "pipe-hittin' bitches." But then, in a moment that's neither true to the joke nor her character, she tells Burgundy she's just work-stressed and apologizes for yelling at him. If ever a cinematic moment deserved a record scratch, that's a top contender. It casts a pall over the last half of Anchorman 2: The Legend Continues and the film never quite recovers, despite a series of incredibly creative blind jokes and a cameo-packed sequence that skewers all manner of niche television news programs. 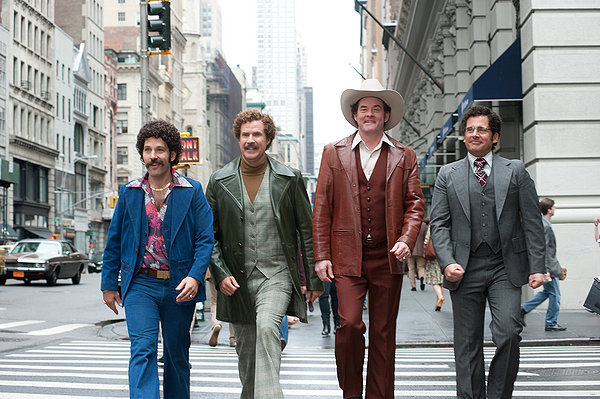 It's hard to make jokes about images that are already jokes, you know?


See, what transpires in that moment is a sudden reversal of the comedic agenda that made its predecessor a minor classic. In Anchorman, Burgundy and his all-male news team - bigoted sports anchor Champ Kind (David Koechner), super-sexy investigative reporter Brian Fantana (Paul Rudd) and permafried meteorologist Brick Tamland (Steve Carell) - had to deal with their television network's decision to hire its first female co-anchor, Veronica Corningstone (Christina Applegate). Some of the jokes, such as Burgundy's insistence that menstruating women attract bears, were aimed squarely at the cultural dominants of the late 1970s, the mustached bigots who ran the workplace like a clubhouse: no girls allowed. Most of the others viciously attacked the hollow, homogenous nature of television reporting, in which anchors promise to give their viewers all of the top stories, plus a few commercials and maybe a segment on a panda bear on a slow news day, in thirty minutes or less.

In Anchorman 2, Burgundy finds himself jobless and on the brink of divorce when he gets an offer to host the 2 a.m. to 5 a.m. slot at an upstart cable network promising round-the-clock reporting. One need not be a journalism historian to recognize that Anchorman 2 is poking fun at CNN, which also launched in 1980 and remains a ripe target for satire. Unfortunately, writers Ferrell and Adam McKay have less to say in a film that's thirty minutes longer than its predecessor, which makes for a lot of dead air. Whereas Anchorman had a narrow target, time and place, Ferrell and McKay cast the net wider, pack this one full of jarring anachronisms and attempt to mock the modern face of 24-hour news within the context of CNN circa 1980. That doesn't always work. 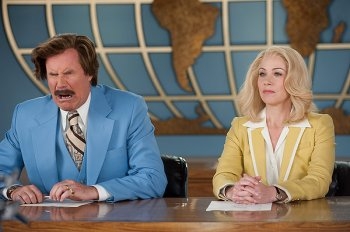 Will Ferrell is a frightening figure. Look at his huge shoulders and his face full of rage.Worse, they finally surrender to their own worst tendencies, making fewer jokes at Burgundy's expense and hewing their characters, especially the women, to easy stereotypes of the "bitches be crazy" variety. Previously, Corningstone was independent and career-driven. Here, she is finally reduced to fighting with Jackson over Burgundy's affections. He suggests they kiss. I wouldn't have been surprised if they had. For her part, Jackson begins as a proud black woman. Less than an hour has passed before she "rapes" (the film's word, not mine) Burgundy, throwing him against a wall and forcing him to bark while she purrs and grinds against his crotch. What are the go-to stereotypes about career women again?

Fortunately, Rudd and Carell - both of whom are funnier than Ferrell - have become marquee names in the decade since Anchorman and get beefier roles to match their elevated stature. They, along with the underrated Koechner, provide the film's best moments and carry Ferrell through any scene in which they appear as an ensemble. At least they're remaining faithful to the spirit of Anchorman, which is like the guy at the party who runs around yelling, "Dude, that's so random!" Except this guy's actually funny. In the most memorable subplot, Tamland forges a romance with a similarly nutty office worker (Kristen Wiig), which basically serves as an excuse for Carell and Wiig to out-weird each other. They succeed admirably. As he did in Anchorman, Tamland gets a moment of shocking lucidity to sidestep any accusations that his character exists to mock the retarded, despite Brick's assertion in Anchorman that he is, in fact, legally retarded. Yes, he's really fucking weird and childlike, in an absurd extension of the popular perception of meteorologists, and maybe he's done too many drugs or took shrapnel to the head, but he definitely isn't as retarded as the Channel 9 News Team would like to believe. Yeah, let's go with that. Because to say that his character is offensive to the mentally handicapped is to say that, finally, Anchorman 2 has nothing to offer, and I'm not about to go that far.

MINORITY REPORT: Anchorman exists in this weird area where it's more remembered for being a series of amusing YouTube clips than for the film as a whole. I've seen Anchorman multiple times and remember many of the jokes, but if asked for a plot description, I don't think I could tell you anything that happens after Steve Carell kills a man with a trident. It's nice to see Anchorman 2 decided to go so far in the other direction, and just be unmemorable entirely. - Martin R. "Vargo" Schneider