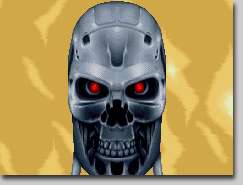 At a Glance: Hot on the heels of the sort-of-okay T2: The Arcade Game, BITS/LJN LTD brings us another game based on the blockbuster movie. It is the finding of this court that all persons involved should be tried for crimes against humanity, placed on a big rocket, and fired into the sun. I would write my Senator about it, but in order to stay sane I was forced to gnaw off my own head while "playing" this abomination. This is without a doubt the worst game I have ever played for any system, PERIOD. I would sooner remove my genitals via cheese grater and stick my head into a drill press than play this monstrosity again.

A tiny T-1000 with incredibly poor posture offers to touch-up the haircut of a tiny, paunchy Arnold Schwartzenneger Schwartsenegger Strong.

Game Plot: The plot of this game follows the movie in excruciating detail, except for all the stupid shit the designers threw in to pad what would otherwise be a mercifully short yet utterly traumatizing experience. You play the T-800 and have to run around punching and shooting people while doing various pointless things. In one level you have to search a house to find a photo ID of John Connor (wasn't the T-800 reprogrammed by the adult John Connor himself? HE SHOULD KNOW WHAT THE GUY LOOKS LIKE ALREADY, DAMNIT!). In another level you have to make a very challenging drive to the mall. In other words, you fuck around a lot while getting shot in the back by various people. Apparently Nintendo thought this sounded like a lot of fun and thus blessed the game with the coveted Nintendo Seal of Approval. Personally, I think you'd probably have more fun playing another game, one I like to call "Punching Yourself in the Testicles Until You Pass Out ".

Weapons: You start off with two weapons, your fist and your knee. One button makes you punch people and another makes you knee them in the groin. Predictably, the knee does more damage, since it has a range of approximately zero feet compared with the fist's 0.01-foot reach. In the first level you can find a pistol and a shotgun. The pistol has unlimited rounds but you have to keep picking up more shotguns until you get enough ammo to last you the rest of the game. The pistol does about half the damage of a punch (of course) while the shotgun kills anything instantly (and also seems to blow up buildings). Whenever you pick up a weapon, you get a huge and painfully detailed text scroller across the screen depicting the weapon's make, model, caliber, physical dimensions, mass, turn-ons, and favorite color. There's absolutely no reason you'd need or even want to know this information, but I guess the designers felt obligated to put something in the upper 4/5ths of the screen that are normally devoid of any content whatsoever because all the characters are all one inch tall.

When you get your firearms, your melee attacks go away as well, since there's no reason why you would want to knock out three guys with a single knee to the balls when you can spend a half hour shooting at them with your small grey dot gun. There's also a jump button, but I really can't figure out what it's for because you don't really leave the ground when pressed. I guess they were trying to be more realistic than most games by not letting you jump over mountains and trees, but I think most people who jump around their yards can usually at least clear the top of the grass. Many people can also walk faster than artichokes and turn around more quickly than a damaged battleship, but nooooo, not in this game! Rather than trying to turn around with the directional pad, you'd probably save time and effort by just getting up and flipping your monitor over.

Enemies: When you're walking around downtown LA, you can expect to be accosted by bikers, cops, bikers, security guards, bikers, the T-1000, bikers, cops, the T-1000, cops, bikers, and booby traps. You can shoot most enemies with your guns, but as soon as you mow down the huge crowd of 50 or so people who have just run onscreen to kick your ass, two more crowds of 50 people run in from either side and start shooting at you and throwing knives in your general direction. You can just walk past them of course, and since each bullet and knife only takes away one point of damage (you have 100 hit points), you can more or less ignore them. When the T-1000 shows up, he melts up through the floor and starts trying to stab you with his sword arms (which you can evade by ducking). If you shoot him a bunch of times he melts back into the floor and immediately melts right out of it again and attacks. This kind of takes the whole point out of having weapons in the first place.

Number of Levels: I'm not sure how many levels there are, as once again I have been unable to complete the game. I'm sure I could if I actually wanted to, but at some point while wandering around the mall shooting cops, security guards, and some random drunk guy that kept walking past, I decided that continuing would lead to permanent brain damage, so I gave up and went to watch an infomercial about Ron Popeil's latest device for accidentally chopping off parts of your own body.

While playing, I saw five levels: the bar, the street, John's house, the street, and the mall. I assume every other level is a street level where you have to ride around on your tiny motorcycle trying to find your way to the next non-street level. While you're riding, you're occasionally attacked by biker gangs, police cars, police vans, and oncoming traffic, none of which you can fight back against because you're unable to shoot and drive at the same time. These levels wouldn't be quite so bad if you actually had some control over where your bike was going. Unfortunately, you have to frequently turn to the left or right, a complex procedure involving stopping in the middle of an intersection, pressing approximately 7 buttons, wiggling the control pad around, and hoping that the computer interprets this as "turn left" rather than "accelerate uncontrollably and careen into an oncoming semi half a mile down the road." At least you don't have to find any "future technology" pieces in the driving levels.

In the walking levels, you have to run around like a moron collecting these little terminator heads lying on the ground before you can leave. They're often concealed in clever hiding places, like on top of the kitchen table or next to a urinal. I don't know what they're trying to accomplish by making you collect them, because it's not going to do a lot of good melting them down when every bar, house, mall, and noodle shop in the world seems to have five or six of them just lying around. Maybe the Terminator's taken up avant-garde metal sculpting on the side.

Number of Bosses: I guess the T-1000 is a boss, but since he appears every 30 seconds or so to poke at you with his arms, he's not a very good one. He probably gets really angry in the end or something, but so little work seems to have gone into this game that I doubt the last fight is particularly spectacular or even remotely entertaining.

Defining Moment: I think it was when I was riding around the streets on my motorcycle and I accidentally ran into a police roadblock, at which point 35 bikers rode up and rammed me until my bike exploded while the police never moved. The game went on to show the world on "August 29, 1997," and told me that three billion people just died. I was of course overjoyed, because in a moment of satori I realized that any species who could create a game this utterly horrible, loathsome, despicable, fundamentally vile, and obscenely evil -- and actually expect kids to pay $50 or so for the privilege of being mentally and emotionally scarred for life by it -- is completely deserving of any self-inflicted nuclear holocaust that happens to come its way.