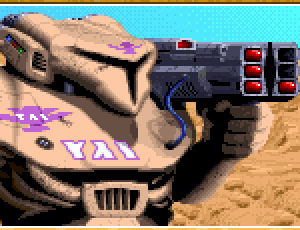 You are a proud warrior in a military or paramilitary force serving a sinister regime. Because of your test scores/aptitude/hatred of tanks you have been entrusted with the mightiest weapon of the first level: the rocket launcher. Wield your slow-moving rockets to great effect and destroy the intruder.

Kneeling in the open completely vulnerable or possibly running forward or backward slightly in preparation of kneeling in the open. There are probably ladders and platforms nearby, but, as a rocket trooper, you don't climb. If your shirt is red or black you might have been lucky enough to deploy to the fabled LATER LEVELS.

You were born to shoot rockets. Don't resent your destiny, launch your rockets in streams at any who oppose the sinister regime. Fire rockets without concern for ammunition or collateral damage. Fire them as your only means of communication.

Q. Who are these other people with me?

Oh, that's probably just Trooper. It might also be Triple Trooper, Laser Trooper, or Big Trooper. Don't worry about those guys. They do their own thing and they won't bother you.

Q. Can I hang out with them?

Look, Rocket Trooper, I didn't want to say this in case they were listening, but those other troopers are real idiots. Triple Trooper does nothing but stand up on his platform blazing away with his three bullets. Laser Trooper dropped out of a community college. I mean, I didn't know it was possible to fail at failing, but he found a way. You don't want to hang around with those guys. You want to find Intruder and blast him. 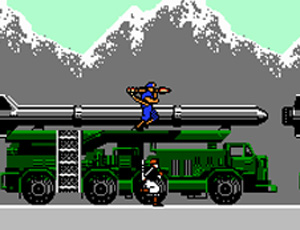 Q. Who is the Intruder?

Good question. He doesn't bother to tell us anything. All we know is that he is in opposition to everything the Sinister Regime stands for and he wants to destroy it.

Q. Is the "Sinister Regime" evil?

I mean, what is "evil," really? What might seem evil to one person is good to somebody else. The important thing is to be positive and have a positive effect on those around you. This can be accomplished by launching an unceasing stream of rocket projectiles.

Q. I feel like I have a book in me. Can I put down this rocket and write my story?

What? No! If you put down the rocket that is when the Intruder strikes. You have to be ready. You are a Rocket Trooper, not a Novel Trooper.

Q. What did the Intruder do that is so bad?

You mean, other than intrude? He is running around this castle/fortress/planet/cyber prison like he is the cock of the walk. And while he is running around, Rocket Trooper, he is slaughtering. He has an assortment of weapons and he is using them to murder every Trooper he sees. He doesn't care if you have a family. He doesn't care if you are a Mecha Gorgon or a harmless floating Power Up Eagle, he will gun you down without remorse. Are you going to wait for him to kill a Baby Trooper or a Wife Trooper or are you going to do something about him?

Q. Can I do something about him?

Can a sandbag stop a flood? Not by itself, but when you pile enough of them up into the path of zipping plasma beams and screen-clearing ultra bombs, when you have thousands of screaming sandbags willing to lay down and die in staggering heaps, you can chip off a block of the Intruder's health. Rocket Troopers just like you have knocked off a block of the Intruder's health before. It can be done. He has five of them, but one by one, with the help of the other troopers, you can prep him for a boss to finish off. 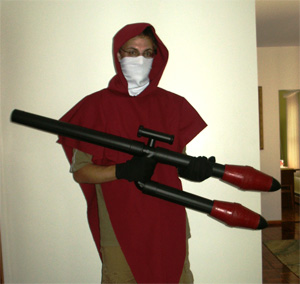 Q. So I am cannon fodder in an endless, futile war against a single man with unstoppable firepower?

That would be one way to describe it. Another way would be, "I am a vital part of an heroic struggle against those who would change our whole way of life."

For you? Firing your rocket at the Intruder.

Q. My freedom to fire my rocket at the Intruder?

Q. I can't take this! Can I fire my rocket at myself to end it all?

Unfortunately, the closest you can get to firing your rocket at yourself is firing it diagonally. I understand your suicidal sentiment though. The best way to deal with that is to find the Intruder. He'll take care of things.

Q. What about the Sinister Regime? Don't they need me?

Nah, don't worry. You are their version of the rockets that launch in unlimited quantities from your smokeless rocket tube. Take care of yourself out there.