First off, allow me to apologize for not updating the Second Life Safari for so long. Between college ending and summer jobs beginning, it became surprisingly difficult to find the time to photograph furries fucking. Nor will I deny that my brain needed a brief respite to heal from the somewhat traumatic experience of running around Second Life. The mind--like a trusty baseball glove, pair of jeans, or vagina--can take quite a pounding, but it still requires recuperation in order to avoid irreversible harm. In my case, it took nearly a month of mental therapy to repair the damage done. 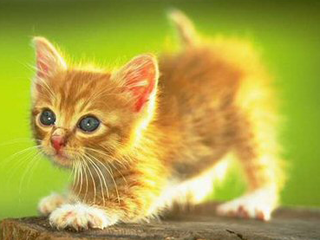 At the urging of Dr. David Thorpe, whose knowledge of Internet illnesses is without peer, I now adhere to a rigorous daily regimen of kittens, rainbows, and strawberry shortcake. Alas, even this strong stuff failed to fully assuage my angst for some time, until, by luck or providence, I encountered a yogi while shopping for goat at Whole Foods. Upon hearing of my stagnating symptoms he prescribed an ancient Nepalese remedy meant to bring about a calm, meditative state. Four seasons of Carebears, watched consecutively in the company of ice cream and a stuffed dragon, finally restored my mind to its former vim and vigor. I am by no means the first member of Western society to use such juju: According to Wikipedia, Roseanne consumed nearly three gallons of Cherry Garcia a day in order to ease the pain of being married to Tom Arnold.

By all accounts, some Second Life superstars could benefit from a bit of mental medicine themselves. When Rolling Stone published an interview with Second Life founder Philip Rosedale, a new standard was set for psychosis. Here are some excellent excerpts:

"I realized [being a Second Life administrator] is like the Greek pantheon," Rosedale says, and he's thinking about creating an avatar in his image. "I like the idea of being a young Apollo. All marble. Like I'm made of stone."

In the tiny town of Hollywood, Maryland, Rosedale's parents enrolled their bright boy in a Baptist trailer school, where a 26-year-old pastor preached fire and brimstone. As soon as he could write, Rosedale decided to copy the Scriptures. "I was like, 'I'm going to transcribe like the monks,' " he says, " 'I'm going to rewrite the Bible.' " [When it came to Second Life], they knew where they wanted to begin -- by simulating the seas. "We started with water," Rosedale says. "It was Genesis." 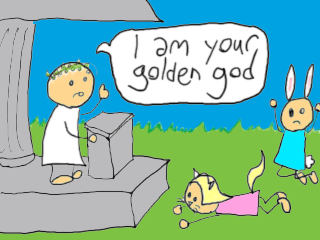 When I started playing Second Life, the relentless hype made me think it was a great marketing coup. I imagined that the media was paid off, that business favors had been called in, and that academics were merely twiddling their thumbs between theses. I figured that a clever marketing team had issued proselytizing press releases until everyone else had a certain reverence instilled within them. I never imagined, not in my most feverish fantasies, that the company was a cult, led by a man so conceited he can't even choose which religion to steal his metaphors from. Apparently being merely messianic is too humble for his hubris.

By middle school, his religious conviction shifted to a place where he could really be the ruler of his own universe: his computer. With a few strokes, he discovered, he could create simulations of the real-world inside his machine. "I remember just turning to my buddy, and saying, 'It's all in there!,' " he recalls. " 'This is like outer space!' " "God is in the machine," as he now likes to say. "The Code is law. The Code is God."

One night in 1999, [Rosedale] and some buddies from RealNetworks went to see the Matrix. After the flick, the guys hit up a bar, tossing back drinks as they effused over the film's vivid depiction of a virtual reality. Everyone, that was, except for Rosedale, who sat at the table sulking about the film's dystopian view. When one of the guys asked him why was being such a buzzkill, Rosedale grabbed him by the shoulders like a mad scientist and barked, "I'm going to build that! And it's not going to turn out that way!"

I imagine most of you are familiar with the 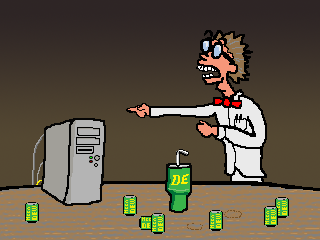 legendary Larry Wachowski, the codirector of the Matrix, who lost his marriage to BDSM, his manhood to a sex change, and respect of film fans everywhere to Matrix Reloaded. This is a man who helped dream up a cyberpunk dystopia about a Christlike computer hacker who fights cloned computer programs and giant robots with his mind and dodges bullets and screws mannish women in vast underground cellars surrounded by a primordial dance party. Larry is even stranger than Barney, an old landscaper I once worked with who had two crossed eyes and used to collect dead animals from the woods in garbage bags so he could have sex with them in his trailer after work. But as crazy as Wachowski was, he was able to recognize the Matrix as a product of his imagination. Rosedale wants to make it a product of his power.

With Rosedale at the controls, Linden Lab lured Burning Man minded geeks from around the Bay Area, who transformed his company into their own culty Mecca. Around the office, they don leather necklaces with pendants of the Second Life logo -- the ancient eye-in-palm talisman called The Hand of God. "All seeing, all knowing," Rosedale says.

What I want to know is where they get this stuff from. Does one simply call up Kay's and order one thousand leather thongs with a pagan symbol attached, to be delivered posthaste to a PO Box in Silicon Valley? Do they sell "Hand of God" assembly kits for kids, like the necklaces my seven year old cousin makes out of plastic beads and twine? Or are the Linden Lab Kool-Aiders a true fusion of barbarian and bohemian, people who hunt down a deer with a satellite guided precision sniper rifle from the future and then slowly cure the tanned hide while indulging in peyote and push email? Who sells these "eye-in-palm talismans," and can I buy one to install in the grille of my truck? That would be sweet, because this way if I hit a deer I could just imprint the talisman into its skeleton and sell the whole thing as one giant leather-'n-bone necklace. I figure that if Mother Nature is kind enough to curse my prey with poor eyesight the least I can do is make good use of its carcass. In this philosophy I am as economical as an Eskimo. Another similarity I share with the Inuit is that it is impossible for me to achieve an erection when the temperature is above freezing. 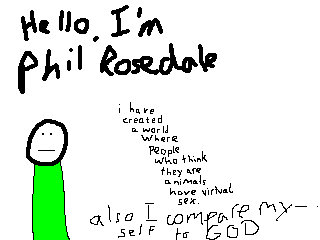 Until recently, there was one primary advantage that Second Life had over RealPlayer: you didn't have to hear the stupid that you saw. Unfortunately, with the advent of voicechat in Second Life, those happy days have come to an end. Think of SL Voice as a worldwide, built-in Ventrilo teamspeak. I spent a few hours skulking around Second Life in voice-enabled areas, and this is what I saw: