The Fleshbeasts Behind State Og

This week's update is a special one, for today we shine our potentially blinding spotlight directly into the eyes of a handful of State Og employees. These are the people who put their nose to the grindstone every day for the company, until there is no nose left and they resort to using their chin. Recognizing these people for their achievements will hopefully expose you to the more humane side of Og, the side that our marketing department asserts is very real despite all undeniable evidence to the contrary. The person responsible for this week's trainwreck is yours truly, State Og representative Dennis "Corin Tucker's Stalker" Farrell (who may or may not have cannibalized his entire writing staff).

History:
Lucas was abandoned on our doorstep as an infant, swaddled in a blanket that appeared to be made entirely of cat fur. As it turns out, he was just an incredibly hairy baby. We were so impressed by the little bastard that we hired him on the spot as a customer service representative. After three years of fielding calls by screaming unintelligibly as our customers have come to expect, Lucas felt it was time to move on and we agreed. He was given a promotion to our marketing division, where he called people at dinnertime and screamed at them unintelligibly in a crude attempt to get them to buy our products. The screaming hasn't stopped since.

No, I mean it really hasn't stopped. As far as we can tell, Lucas screams constantly, even while off duty. He hasn't made one sale yet in his twenty years of employment, but he has reached out to an unbelievable number of people and made them vaguely uncomfortable. There is no substitute for that kind of service so Mr. Thon will always have a spot at Og, provided he never stops screaming or somehow learns how to speak.

Greatest Achievement:
Lucas once mistakenly called his own cell phone and screamed at himself for three hours before realizing what was happening. At this point he paused for a moment, blinked, and surprised us all by screaming unintelligibly.

Position:
Secretary, I think (What else can women do? I don't think we have a Kitchen Cleaning or Lesbian Pajama Party/Pillow Fight division. Yet.)

History:
State Og has been unfairly branded as a sexist corporation, a group of lecherous men who do nothing but hurt others and patronize women. We proved our overzealous skeptics wrong without a shadow of a doubt last year when we took the bold and daring step of hiring a woman. So what if I can't remember her name? She symbolizes the strength of women everywhere, so doesn't it make sense for her to remain faceless, and braless? For the sake of women everywhere, I think it makes perfect sense.

Greatest Achievement:
Once spilled coffee in the lap of our senior pants technician, leading directly to the development of our Donut Pants, the delicious pants that actually make you want to pour scalding coffee on your crotch.

An artist's(me) dramatic recreation of the frightening invasion.I have no idea where they come from, but every morning there are deceptively delicious-looking cupcakes strewn about the entire State Og complex. Believed to be a result of some sort of time travel experiment gone awry, these cupcakes are potentially dangerous, and therefore off limits to the employees of State Og whom we care about. Which is why we hired Porkins. The man is like a human version of a machine that... eats cupcakes I guess. It's really alot more impressive than it sounds. I mean, he doesn't even drink any milk! He just stomps through the offices and shoves cupcakes into his mouth all day, rarely vomiting on anyone's desk. George isn't the brightest of employees however, and has been known to mistakenly eat phones, potted plants, and load-bearing walls thinking that they're delicious cupcakes.

Greatest Achievement:
George is most famous for his role in the Cupcake Invasion of '97, when Earth was attacked by aliens who appeared to be large sentient cupcakes hellbent on enslaving humanity. Mr. Porkins sprang into action and ate the entire invading force, becoming a hero to man and slightly gay man alike. Tragically, the invaders turned out not to be cupcakes at all, but were rather sentient pieces of cake who had decided to camouflage themselves by wearing cupcake costumes. Upon learning the horrible truth, George fell ill and has never fully forgiven himself for the disgusting acts he committed that day. Cake. Jesus, how could he? 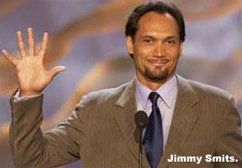 An artist's(me) dramatic recreation of Jimmy Smits.Lowtax is a new addition to the State Og team, taking on the role as our security chief in order to support the somewhat popular website he runs, "Something Awesome". While we can't speak for his website or sense of humor, we can say he's a great shot. In fact, Lowtax was initially rejected for the position but wouldn't take no for an answer. Upon his initial rejection, the spunky little guy shot his interviewer in the face, which is what we believe killed him. Lowtax refused to leave without a job, and determinedly shot the next fourteen interviewers until one finally agreed to hire him. In his excitement Lowtax shot that man as well, then tried to administer first aid by shooting him several more times.

Greatest Achievement:
Became widely regarded as the first African-American professional baseball player in spite of all the odds against him; being white and having never been drafted by pro baseball. He is truly an example of what a man can do when he overcomes adversity.