State Og would like to publically apologize to the passengers on last week's Happy Time Og Pleasure Cruise for the lack of an actual boat. As it turned out, loading you into airplanes and crashing these airplanes into the sea was not as fun as we had hoped. In order of appearance this week is Brett "Nimmo" Hurban (3rd Jawa from the right), Aaron "ElcyberGoth" Young (Princess Leia's body double), and Jason "Vengeance Otter" Johnson (Jabba the Hutt's left breast puppeteer).

There are several companies who already produce universal remote controls. These remotes can control televisions, VCRs, DVD players, and other such devices regardless of manufacturer. That is good and useful and all of that, but at the same time defies the word “universal”.

State Og has created the world’s very first actual universal remote control. The True Universal Remote started as a project to make farm machinery explode for no reason. Once this was accomplished we decided that it would be fun to control or detonate other mechanical devices. From these pointless beginnings the True Universal Remote was born.

It is not possible to control all of the functions of every device that the remote is pointed at. This would require a sickening amount of buttons, and no matter how much we enjoy confusion, we do not hire engineers even nearly as retarded as Sony. The result is a simple device consisting of relatively few buttons, each of which controls certain functions on a certain device. That is what a remote is, children.

The buttons have remained unlabeled to prevent users from mastering the remote and using it against State Og, so you will have to experiment. Just to keep you interested here is just a few things that the remote can do.

Since our marketing guys tell me that I must end with a full conclusion that somehow repeats everything that I have already said in the last few paragraphs, even though you have already read them, to make our product more desirable; I am going to say “fuck them” and end it with my new slogan for the True Universal Remote.

“Dude, you can kill seagulls!”

Up and down the venerable State Og HQ halls, around the sprawling State Og Memorial Golf Course, and around State Og's 30,000 Og Burger franchises we've noticed a common denominator recently: sad people. We're not sure what it is. Our production is up, our costs are down, our services have never been Oggier. At State Og happiness is a chief concern on our list of mildly interesting concerns, so it was necessary to get to the bottom of this problem.

To our shock and amazement, we found that some of our products were the cause of some of this dissent. For instance, the State Og Automated Testicle Thief was described using terms like "dreaded" and "pointless" rather than "peppy" and "whimsical". Our Og Cream was found to contain more hydrochloric acid than most people expect from a skin cream. We've had the things said about our Bowl O' Feces sealed away for eternity.

This massive, crippling problem required a massive, crippling solution: the formation of the State Og Hug Brigade. This elite cadre of husky men and women parade haughtily looking for gloomy gusses to cheer up. Upon finding a sad looking person they will apply hug therapy until they feel better. They must feel better. They will feel better. Our studies have shown that close contact with obese sweaty people will cheer anybody up, pronto. Then it's back to the slave pits for another productive day!

It has been said that there is only one major political party in America: half of its members call themselves Democrats and the other half call themselves Republicans. If you should happen to be one of the people holding this opinion, you should know that the upper-echelon of State Og management shares your belief. But since the top brass at State OG make all their major decisions by divining the future based on the mystical patterns they find in their Depends brand undergarments after their nightly “accident,” it is probably safe to assume you’re wrong. If you can’t tell the difference between the Republicans and the Democrats to the degree that you put them in the same basket, chances are you are an idiot or an extremist idiot. Either way, you are in the choice demographic that I am trying to persuade with this article, so, from this point onward, I will refrain from making fun of you any further or the length-challenged bus you rode into school on. 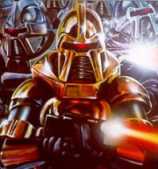 Here is an artist's rendition of the Gold Cylon leading his compatriots to victory against the employees of a local Dairy Queen.

As part of State Og’s effort to bring attention to the little-known Demonic Robot Party of America, last week we recapped our support for the Maximilian presidential campaign. However, there are other members of DRPOA that we want to bring to your attention. This week we would like to introduce the candidate who bring s a new meaning to the phrase “comedy gold” known as the Gold Cylon Centurion.

Amongst robots, the most controversial issue is humanity: should it be destroyed or merely subjugated? “As I see it, destruction is the best option, but not complete destruction. I mean, who knows if some day we'll discover that the human liver produces the perfect oils for lubricating Cylon joints, or something like that,” states the Gold Cylon, looking out at the beach from the balcony of his San Diego beachfront home. “There are a lot of people not worth keeping around, especially when you consider how whiny they are. Take, for example, the time when us Cylons thought it would be a cool prank to simultaneously destroy the Twelve Colonies of Man and their fleet of Battlestars after arranging for peace negotiations. I tell you, humans have no sense of humor.”

“The original race of lizard-like creatures that created and taught us had a great sense of humor,” stated the DRPOA hopeful, “which is where we learned our prank-loving ways. They injected everything with humor, including the way they built us. See my red eye; how it constantly moves from side to side? That’s not because it’s some fancy kind of scanner, it's an artificial eye that sees the world like your natural one does, except I can’t control what I’m looking at or focus on anything. My vision of the room is swinging from one side to the other. I’m not shitting you; this is why it takes three of us Cylons to fly a damn spaceship." The gold Cylon laughs as he reminisces, "God, I miss those crazy lizards and their practical jokes so much, I almost regret wiping them all out.”

The Gold Centurion sees a bright future for not just America, but also the world, if the people choose him. “If I’m elected president, I will personally remove all electronic components from the case of every Apple Macintosh still in use and replace them with Commodore 64 motherboards. Since the venerable C-64 still maintains a larger market share than the Mac, supply for the parts to do this shouldn’t be a problem. Oh, and after I’m done with that I'll have the earth strafed and bombarded until I can see it’s creamy caramel center.”