Welcome to 2004! State Og has a lot planned for the upcoming year, including several exciting and fun additions to your tap water. That can wait though, let's get right down to business for now! Thanks this week go to Jason "Vengeance Otter" Johnson (New Year's Resolution: find his keys), Brett "Nimmo" Hurban (find Vengeance Otter's keys), and Dennis "Corin Tucker's Stalker" Farrell (quit eating keys).

Rock Your Enemies Hard and Your Allies Harder!

If you are currently serving active military duty in one of the world’s many action-packed zones of conflict, do you feel something is missing? In your heart-of-hearts do you harken back to the simple days of yore, when soldiers marched in lines and in step to the rhythm of a military band? Do you need something to put a little oomph into your step as you run off charging machinegun nests? Well, if you answered yes to these questions, or even no, Og has the answer to your problem: our new Live Battlefield Musician Program.

That’s right, for a nominal fee, State Og will ship a contemporary instrumentalist (and a roadie to push his amp around) to the battle zone of your choice. Now you or the warriors you love can be played into battle with a hot rockin’ Eighties guitar solo or a bassist playing the energetic thumping and popping of funk style bass. Amaze your brothers-in-arms and impress your enemies with a State Og Battle Musician! But don’t take our word for it. Just listen to these testimonials: 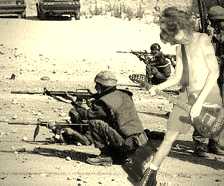 Earlier in Afghanistan, I had just aimed my mortar at small group of infidel American Solders and was preparing to send them to the afterlife, so Allah could spank them for their sinful ways, when suddenly from their direction I heard the most enchanting sound: a melancholy ballad played by some spandex-clad minstrel. I was so enthralled by this sinful, decadent music that before I knew it, I was igniting my lighter and lifting it skyward. That’s when the heat-seeking missile hit me.

- Ghost of Abdul-Alim Kadeen (via ouija board)

OG has unleashed the fucking fury!

Order now and get a dozen free sets of wireless headphones for those covert missions!

There are people on this planet that have made claim to stretches of land on distant planets, thier satellites, and other heavenly bodies. In fact, there is even a lunar embassy somewhere in a desert state. I'd tell you which state, but I don't feel like using my time or reference materials on something so stupid. Land is expensive, and almost all land on our planet is owned by humans living on Earth. These people have obtained their land by either purchasing it, discovering it, or conquering and seizing it (which is how I've come about my 15 acre estate). However, some people are so ballsy that they claim land from worlds that nobody from their very planet has even set foot upon. This is what intrigues us.

We've noticed that the same people laying claims to Afla Moteir 3 have never tried to claim their neighbor's property. We can see no moral difference between claiming your fellow Earthling's land and Emporer Zaxxon's favorite moon. We assume that they only reason these "explorers" do not claim other their fellow human's land is only because they are scrawny weaklings who fear physical retaliation. The other possibility is that ownership laws do not apply to foreign planets. This would allow for any being on any planet to claim the land of any other being on a foreign planet. This is the thought process that we have subscribed to, and that is why State Og sent their very own probe, HAPSBY, to Mars years ago.

HAPSBY's mission was to fly to Mars and and drop a small cabin made out of popsicle sticks attached to a huge anchor. This was to be considered a permanent settlement. HAPSBY's next objective was to fly back to Earth and deposit an EARTH BUGGY with the purpose of claiming land on the foreign planet that martians such as HAPSBY call Earth.

We are happy to announce that the EARTH BUGGY has returned from Mars, and landed in Southern Europe. EARTH BUGGY has already claimed over 30 square miles of land there, and shows no signs of stopping since the kind and diplomatic Earthlings known as State Og have been kind enough to keep this brave traveler fueled. We can only hope that HAPSBY and EARTH BUGGY come in peace and will not force the indigenous people of Southern Europe off of Martian-owned land with inhuman State Og weaponry.

Congratulations, recruit! To get to this point, you've gone through a lot. You've passed Basic Training, Spring Training, House Training, and the Butter Ordeal. Before you become a full-fledged State Og field agent, however, you must face a horror that will make everything you've done so far look like child's play. That's right, it's time for the infamous multiple choice test. The following three questions could very well destroy you. Good luck.

1. The most important piece of equipment in a field agent's kit is:

2. Your partner has suffered a potentially fatal papercut while filling out his daily paperwork. In turn, you:

A. administer mouth-to-mouth
B. make funeral arrangements
C. vow to burn every book you come across in order to avenge him
D. administer ass-to-ass

3. A potential customer refuses to purchase a single thing from you after a lengthy sales pitch. The best way to handle this situation is to:

A. become a riverboat gambler, getting into whimsical and heartwarming adventures when you're thrown overboard for cheating
B. put the knife away and try a less threatening approach
C. breathe heavily, charge $3.99 for each minute you've spent talking to them
D. press the red button sewn into the sleeve of your uniform, assume the fetal position