I hope you're sitting down, because I have some startling news that will shake you to your very core!

First of all, the year isn't 2013 A.D., it's 47 R.E. (Regenerated Era). Secondly, Jesus has returned in the form of a vlogger who draws naked ladies. Third, what we know as the planet Earth is actually the inside of a giant space egg. Fourth, Nazi scientists recruited by NASA discovered a glass barrier in the sky, but they are hiding the facts.

If you're still reading, you haven't gone into shock, which means you're strong enough to handle what you'll find at Miss Teri-Baby Lonestar, home of a webcomic artist (Steven Joseph Christopher, or 'StevieTheFox') who believes he's the returned reincarnated Christ. Other exposed truths include:

As for Miss Teri-Baby Lonestar, the webcomic this site is ostensibly about, it's basically Steve's way of selling all his great theories to the masses. It follows a perpetually naked former stripper (don't worry, there are stars censoring her naughty parts... most of the time) who hears heavenly messages from Stevie and makes the pilgrimage to Zion. Come for the boobs, stay for the religion! (Here's hoping Jack Chick is taking notes.) Oh, and like all great comics, it involves a fascinating origin story: Steven created it while he was in jail for making death threats against the president. 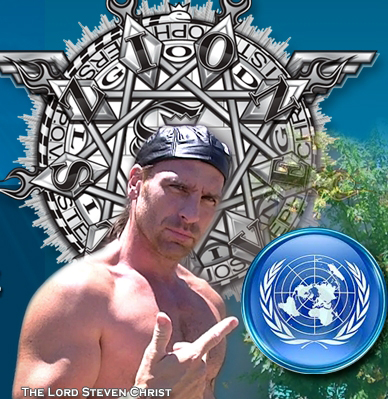 As you've probably noticed from the multitude of videos embedded on every page, Steven is also a prolific vlogger. Naturally, he is personally insulted by all the atheists saying he doesn't exist, so occasionally he responds with weird, vaguely threatening videos. Remember when God used to flood the earth because people were praying to cows or whatever? Now he just tries to act like a tough guy on YouTube. Oh, how the mighty have fallen.