Can we finally break Joseph "Jay Dub" Wade's spirit? Will he be crushed under the weight of his own responsibilities to chronicle every talking animal film known to man? Will he finally succumb to his rage and bludgeon his editor to death with a squirrel carcass? Find out as he reviews The Nut Job this week. Also featured, we have Martin R. "Vargo" Schneider on Jack Ryan: Shadow Recruit and Sean "Keanu Grieves" Hanson on August: Osage County.

EXPECTATIONS: Being the first animated feature of the year carries with it certain expectations. The Nut Job is going to set the tone for everything that follows for the next twelve months. Will it push the form of animation into new, exciting directions? Will it buck the trend of horrible movies about talking animals from second-tier studios? Or will I continue to waste away my life watching animals dance around while shitty pop music plays in the background? Oh, well I guess I already know the answer to that one.

REALITY: You know the old expression "Time flies when you're having fun"? Well, the opposite is also true. Time slows down when you're not having fun. In the case of The Nut Job, it slows to an interminable crawl as you and everyone around you wait for the merciful release of death. Or the closing credits, whichever comes first. This film has a kernel of a good idea trapped somewhere inside it, but wastes so much time piling on more unnecessary characters and plot contrivances that it becomes the thing all films fear most: It's a goddamn bore. 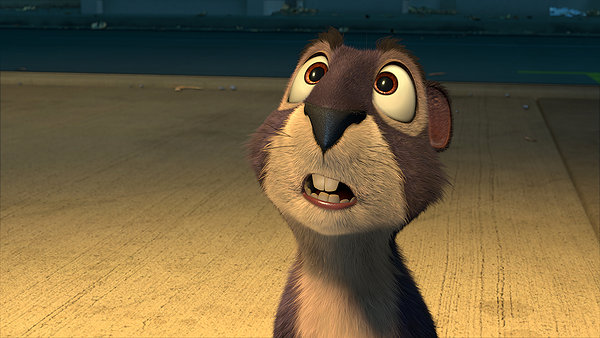 Every animated film needs a shot of the hero looking up in wide-eyed amazement at something just above the frame.


When Surly the Squirrel (Will Arnett, who sounds even more bored to be here than I am) and his sidekick Buddy are kicked out of the city park for accidentally destroying the animals' winter food supply, the two happen across a dream come true: a nut shop. Surly scopes the place out and discovers that a team of criminals have purchased the nut shop and are using it as their base of operations while they rob the bank next door. He has no idea what the hell they're doing, but plans to steal their cache of peanuts anyway.

"Okay, cool," I can hear you saying. "So there are parallel heists going on here. This could be fun..."

Well hold on a second, because as soon as Surly hatches his plan, all the other animals show up to commandeer the peanut heist for themselves. Raccoon (Liam Neeson) orders squirrels Andie and Grayson (Katherine Heigl, Brendan Fraser), Mole (Jeff Dunham), and a team of groundhogs to help Surly steal all the peanuts before the criminals use them as decoy bags when they eventually rob the bank. 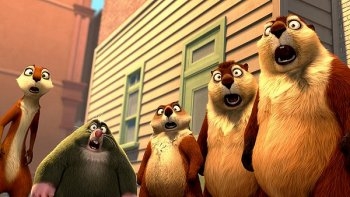 Every animated movie needs a group shot of supporting character unanimously over-reacting to something the hero just said.That's because I haven't told you about the criminals' guard dog Precious (Maya Rudolph), a pug who caters to Surly's every whim because he's stolen the owner's dog whistle. The whistle is particularly important to this film, because for some reason, it drives one of the criminals absolutely crazy. This character, Knuckles, is the spitting image of a Sam Elliott character, speaks not a word, and is the only human in the film with even an inkling that animals are running around doing something stupid. This is a fact that never comes into play, and only serves to waste time.

Are you tired of this yet? Am I boring you by detailing all of the things going on in The Nut Job? Would you like to know more? No? That's too bad, because there's still more garbage to unearth here, like the fact that the film fashions itself after classic comedy routines from the 1950s. It's set in a nondescript, ageless version of New York City where people still say things like "Why I oughta&" and "Wiseguys, eh?" Characters thumb their noses as one another and give other outdated gestures that I don't think today's kids will register as things that are supposed to be funny. Of course, all of this timeless world-building goes right out the window as soon as a groundhog farts and "Gangnam Style" starts playing.

I would like to spend the rest of this review actually discussing how distressingly flat all of the film's characters are, but there wouldn't be much point. There's simply nothing there. There is nothing going on underneath the surface of purple squirrels accidentally thwarting a bank heist that could not conceivably succeed in the first place. (Halfway through the film, I actually started paying attention to the bank heist instead, only to discover that there was no way these guys were ever going to pull it off. This film is just lousy with disappointment.) The Nut Job fancies itself a spiritual successor to Looney Tunes, but completely forgets that a good gag should come first. It lays on its plot thicker and more obtusely as it goes, causing more people to yawn and check their phones more times than I have ever seen in a single theater.

Relatively speaking, the film was made for peanuts, and boy does it show. The Nut Job looks like 2006 got sick and vomited all over a Dreamworks movie. Instead of animating characters reacting to things, the film employs roughly a dozen freeze frames as a means of delivering comedy. The effort taken to stretch a ten-minute short out to feature length should have gone more toward making something that looks presentable in 2014 rather than filling it with a preponderance of plot. Kids aren't going to care how intricate your heist-on-a-heist gimmick is, but they'll notice right away if your movie looks like shit and isn't funny.

MINORITY REPORT: I just remembered that PSY also appeared in a pistachio commercial last year. Does he just really love nuts? Is that part of the PSY gag that I missed? That is an oddly specific schtick. - Martin R. "Vargo" Schneider